Fringing a While With Cyle-Part Three

One of the things I find myself asking about so many shows this year is: Is this a Fringe show? I then realized that I needed to ask the question: What is a Fringe show? That’s not nearly so easy to answer. I saw that I had been using my intuition to guide me through the convoluted neural pathways that would eventually lead me to an answer. Now I am setting out to find the answer in a logical way. I will now attempt to use my brain. Please be patient. Also, please ignore the smoke…that happens when I have a thought. It’s a lot of trouble in restaurants. 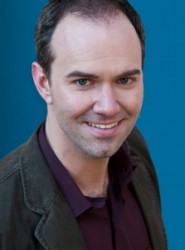 I decided I needed another perspective that might be slightly outside my definition of traditional Fringe shows to help me find the road to the heart of this conundrum. I called up Matthew R. Wilson (Artistic Director for Faction of Fools) and asked him some questions about his involvement in Fringe and what Fringe in general meant to him. We moved through the conversation like students at 3 A.M. who are now down to philosophy as the only topic left untapped and with a determination to see the sunrise and pass out shortly after. So it was one of the best I’ve had in years.

When I asked Matt why he chose D.C. as the home for his theater company, he replied that he wanted to work at “a high professional level in ‘his’ hometown”.  He cited the fact that this city’s theaterscape is very smart and (especially amongst the smaller theaters) willing to take many risks. I think this begins the definition of a Fringe show. Phrases and adjectives like ‘cutting edge’, ‘risky’, ‘avant-garde’ are used to describe them constantly. So initially I would say that the Fringe is a place to walk along the razor’s edge that surrounds our culture in an attempt to find shows that will push the envelope of understanding into the not-necessarily-willing hands of the citizenry and make the package attractive enough for them to want to open it.

Then Matt said something about Commedia dell’arte in general: it is not theater about good and evil, it’s about two competing goods conflicting with one another.  And this drew me into a thought pattern about our city in particular. At the heart of our city is the political establishment the runs our entire country. Inside the walls of the capital you have two (ostensibly) good groups of people whose beliefs happen to clash most of the time. While we might not like the actual politicians, their ideals are worthwhile, if contradictory. This, for me at least, is the most affecting kind of theater (one without a distinct villain). This is theater where you could see yourself on any side of the table and are forced to consider all sides of an argument.

Ultimately, I think that Fringe has a lot of shows that like to bludgeon their audiences with actors, or thoughts, or profanity in an attempt to hammer home their ideas without thinking about the easy counter arguments that exist in most brains.  I think that they have lost their focus. I realize as I write this that the Fringe Festival is named for the object/idea/social more that it is designed to bludgeon. The point of the Fringe Festival is to find a way to beat down the barriers that we have created on the fringes of our internal universes that keep us from interacting on a meaningful level.

A Fringe show is a hammer that shatters an idea that has kept us from our dream, or our love, or our life; so we can walk out of the theater and continue our journey without impediment. Once of those barriers are removed from our consciousness/society/relationship we can develop new ideas that draw from the strengths of all perspectives instead of continually commenting on the weaknesses that exhibit themselves. Especially in this city we could use a time of year when we see those walls exposed to us by artists and then help to break them. We can be advised by those on stage to climb down off our crosses because someone needs the wood. And once we do, just imagine the bridges we could build with all that rubble and lumber.

Matthew R. Wilson’s Company:
Faction of Fools is presenting
The 2nd Annual Fool for All: Tales of Courage and Poultry
At the Mountain on 9th and Mass Ave NW
July 23rd at 9:45 PM

Check Out what Cyle’s doing next!
Love Me! (why everyone hates actors)
Located at The Shop at Ft Fringe Located at Woolly Mammoth
607 New York Ave NW
July 23rd at 3:45PM