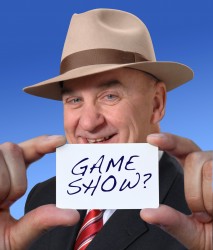 In the Game, two audience contestants are chosen to compete against each other. Their goal is to match their answers, to a particular question, with the answers of the celebrity guests. And let me say this, by no means would these Q & A’s be meant for Gene Rayburn’s old TV show. This is ultimately an X-Rated version of the old game – and that is where the fun begins and ends.

The second part of the show is an actual auction of items during commercial breaks. The most expensive item that was auctioned was a “Private Party at Phillipa Hughes’ Balcony Bash!” This item raised $500. In total, $1,430 was raised for the three charities.

So…. if you want to see a humorous X-Rated game show; see some of DC’s finest hamming it up; and be part of an event that benefits three local charities – Match Game DC.com is for you. You will most assuredly have some good laughs – and leave the theater with a smile on your face!