Fringe Review: 2nd Annual Fool for All: Tales of Courage and Poultry

This lively, highly energetic show, produced by the Faction of Fools Theatre Company, features five comic vignettes, from a collection of nine, that are in rotation at the Mountain. 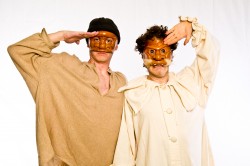 Faction of Fools, which is based at Gallaudet University, is one of the prominent Commedia dell’Arte companies in the United States. If you are not familiar with the physical comedy associated with Commedia dell’Arte, you are in for a special treat. The Faction of Fools’ company, a mixture of hearing and deaf actors, and sign interpreters, are an ensemble of skillful and artful performers.

‘Coq au Vin’, created, directed, and performed by John-Michael MacDonald, was the ultimate crowd-pleaser. Mr. MacDonald’s comic style, presence, and commanding voice lit up the stage. His vignette was truly memorable, but a less than strong ending weakened it some.

Additionally, I thoroughly enjoyed the introductions of Artistic Director Matthew R. Wilson. He has a wonderful voice and sense of timing. I would have liked to have seen him as a narrator in character, rather than a figure head. He could have easily added another dimension to the performance piece.

2nd Annual Fool for All: Tales of Courage and Poultry information and tickets.