As a child, my grandmother introduced me to the extraordinary Judy Garland. Through the years, we watched Garland’s movies over and over again, and our favorite was Meet Me in St. Louis. Because of this, I felt a special connection to her on Saturday night, when I attended the stage version of Meet Me in St. Louis at Montgomery College Summer Dinner Theatre, the same theatre where my grandmother and I viewed musicals for many years. 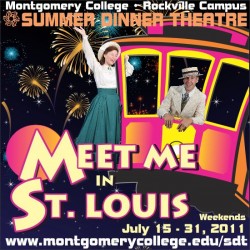 This musical tells the story of the Smith family who have proudly lived in St. Louis all of their lives and are especially proud that their hometown is about to host the World’s Fair. Charming Tootie, the youngest daughter played by Heidi Kaplan, exclaims, “Wasn’t I lucky to be born in my favorite city?” When Mr. Smith learns that he is being transferred to New York, will the Smith family be able to leave their precious hometown behind?

Every member of the Smith family is beautifully cast. Emily Lentz, in a performance that would make Judy Garland proud, is an enchanting Esther Smith, full of youth and optimism. Her duet “You Are For Loving” with “The Boy Next Door” John Truitt, played by Justin Calhoun, is very endearing and true. Playing Mrs. Smith, Rachel Meloan’s trilling voice is incredibly lovely, and her performance of “You’ll Hear a Bell” is definitely memorable. Callie Falk’s flirtatious Rose Smith and Kevin Robert Mori’s kind-hearted Lon Smith are very talented actors, and they are especially amusing when arguing about the Christmas Ball in the second act. Jackie Kempa’s Agnes and spunky Kaplan’s Tootie are absolutely adorable as the two younger sisters, especially during “Under the Bamboo Tree.”

What I loved the most is when all of the Smith family, including Mr. Smith (Thomas Copas), Grandpa Prophater (Renwick Anson Paige II), and feisty Irish maid Katie (Beth Amann), would sing together, because they created beautiful harmonies and incredible amounts of joy during “Whenever I’m With You.” Although he is not technically part of the Smith family, Calhoun’s John Truitt is adorably awkward, but his strong voice is featured during “Over the Bannister.”

In his Summer Dinner Theatre directorial debut, Danny Tippett shows the audience the importance of family through his direction of the Smiths. His blocking choices, from the sisters chatting on the couch to Esther and John’s romantic duet on the swing, are both meaningful and show a strong connection between the characters. Kurt Boehm’s choreography starts simply but soon grows to a beautiful ballroom number in “Banjo.” A particularly dazzling moment occurs during “The Trolley Song,” when Ryan Kanfer expertly demonstrates his dancing talents before lifting his partner Justine Icy Moral in a graceful pas de deux. Conductor and Music Director N. Thomas Pedersen leads a spectacular 21-piece orchestra that lends its beautiful tones to the classic tunes.

Costume Designer Peter Zakutansky dresses the actors and actresses in amazing attire, and Esther’s costumes are true to those in the film. However, the make-up used for Paige’s Grandpa Prophater should be reconsidered; he looks far too young to be a grandfather. Elizabeth Jenkins McFadden’s set for the Smith home not only contains lovely antique furniture and is framed with intricate lattice-work, but it also includes a beautiful wooden staircase and bright green double doors that allow for a great deal of movement from the actors. Speaking of movement, the green and gold Trolley glided gracefully across the stage both during “The Trolley Song” and during a special appearance at the end. Lynn Joslin’s lighting is superb, and the stars that light the stage for “You Are For Loving” are especially perfect.

Meet me at Montgomery College!

Running time is approximately 2 hours including an intermission.