Many have heard of the legend of Beatrice Cenci, a 16th century nobleman’s daughter, who killed her father for all the right reasons, but her story has never been told by a woman. The Georgetown Theatre Group threw the conventional Male’s perspective of her story out the window and prepared a series of five short plays (Thoughts of Rome by Lori Fischer, The Blizzard Comes by Monique LaForce, The Cenci Portrait by Rebecca Nesvet, The Operators by Lucy Tyler and Belle Phantasm by Alia Faith Williams). Each playwright approached the myth of Beatrice’s execution with enough curiosity, imagination and creativity to push several audience members to the point of sympathetic tears. Brava! Be ready for an evening of mystery, sensuality and poetic visuals. 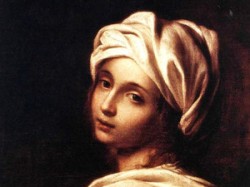 Madeline Ruskin (Beatrice, Phantasm) stole the show with her stunning portrayal of a wrong, young girl, her command of her sensual and horrifying body and a practiced innocence. Nick Allen (Percy Shelly, Poet, Marzio, Cop) flipped seamlessly back and forth between the lovable loser and and intense drug dealer with a penchant for murder. Jacinda Bronaugh (Sirani, Producer, Lucrezia) rocked the stage with her stunning confidence, quick tongue and inspiring charm. Sun King Davis (Olimpio, Operator 2, Alissandro) wrapped himself in a dreamy cloak the audience ate up, no matter the role or costume. Prairie Griffith (Operator 1, Clarastella, Playwright, Claremont, Cop) wove herself in and out of each scene with precision and absolute command of her characters. Justin Mohay (Francesco, Main Operator, Historian) portrayed the perfect villain, the poised angle and the haunted man in the middle.