Sarah Kane plays seem to be one part group therapy, one part flow of consciousness, one part poem, and a sprinkling of character relationships that shift and flow with the speed of mating dragonflies. 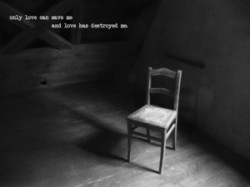 In Avalanche’s production of Crave we appear to have two couples, though their roles move in and out of that structure freely. One woman seems to be a younger version of the other embroiled in a love affair with an emotionally unavailable man – who tries to drink and smoke himself to death before actually asking for her to finish the process. The older couple’s male counterpart wants only to serve and adore – and this ultimately drives his companion mad.

One scene that was marvelously staged showed us the best that each man had to offer and the fact that, at the time, the women chose to submissively accept what they would later reject out of hand. This scene comes early in the play so there won’t be a major spoiler here. While the older man espouses his love and lists all the little things he wants to do to make his lover happy, the younger man has emotionless sex with his girlfriend on the floor next to them.

The play was wonderfully cast and well directed by Jon Jon Johnson. The fluidity of movement and relationship helps reinforce the chaos of the emotional content. I was especially impressed by Christopher Herring’s portrayal of the older male. His guileless performance drew you into his story of being betrayed by his loved one’s sanity. The one downside was a slight lack of emotional dynamic. The play became dark very quickly and simply got darker as it went. It is well delivered and choreographed and is definitely worth a look for anyone who likes Fringe and/or art house theater.