Visit to a Small Planet at American Century Theater

“We are going to seek out new life and new civilizations and boldly go where no man has gone before.” For our readers out there who remember those infamous words from the introduction of the TV show, Star Trek, you quickly come to the realization that Visit to a Small Planet is something that must be experienced. 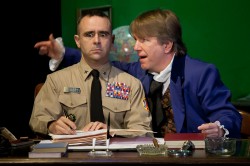 Artistic Director Jack Marshall couldn’t have timed the play any better on our country’s historic calendar for two reasons. On Friday, the Space shuttle Atlantis lifted off on its final mission of America’s 30-year shuttle program. Should we not entertain the idea that a UFO might someday explore ours? Also, next month is the 150th Anniversary of the famous Civil War Battle of Bull Run, fought in 1861. We quickly discover the alien in the plot, had planned to land his spaceship on this famous battlefield in Manassas, Virginia. He accidentally lands in the year 1958, about 100 years later due to mechanical problems. Since the entire play takes place in Virginia, American Century Theater’s location here in Arlington is particularly mindful to its patrons.

There is both wit and charm in the dialogue, simultaneously playing to both comedic aspects and plot development. The Pentagon plays a major role, too. We hear such verbiage as “Let’s not play 20 questions” and “I need 16 copies for immediate distribution,” providing realistic tie-in to Washington’s Defense establishment. The alien is asked, “Why did you come here?” and responds, “It’s a pleasure trip to your small planet. You’re a hobby of mine.” That is important verbiage within the play and is key data as the plot evolves.

Using Mayberry as Conrad’s last name, the location of The Andy Griffin Show, and General Tom Powers that mimics Gary Powers name from the U-2 incident when the CIA plane was shot down by Russia, is fairly emblematic of what was transpiring when the play was performed on Broadway in the late 50’s. Whether these naming conventions were an accident or done on purpose, we don’t know. Gay Playwright Gore Vidal sprinkled some sexual overtones and double entendres in the script.

American Century Theater succeeds artistically with its use of physical comedy and special effects. For example, Mr. Spelding is re-introduced by his daughter to her true-love Conrad. As Conrad extends his hand to offer a handshake to his maybe some-day father-in-law, cigar ashes are dropped on his hand. When the spaceship lands, dried ice produces fog which only adds to the reality of the experiential setting. The alien is capable of reading the minds of the other characters in the play as well as moving objects on the set. To show the caliber of the actors, General Tom Powers during the last act of the play steps up to his office and accidentally knocks down two of the items from the bookcase. Nary a second expired, before the alien extemporaneously exclaims …”I didn’t do that!” The audience roared in approval… Oh the magic of theater!

The stage set is amazing and historically accurate. Life Magazines are strewn around the stage from 1958. The bookcases contain hundreds of books which were fairly popular reading material for the period. When entering the theater, you have the feeling that you are walking into a well-decorated Virginia colonial home containing a carpeted living room, fireplace, bar, patio swing set with lots of attention to detail. Stage left there is a cavaliered set consisting of an office, phone and globe. (Pay careful attention to the globe throughout the play; it plays a major role within the production.) The proscenium stage is utilized exceptionally well to capture the audience’s attention.

There are ten characters in the play, so let’s give special mention to a number of them: Bruce Alan Rauscher, who plays the alien, Kreton, provides a strong performance with highest honors. John Tweel, who plays General Tom Powers portrays the perfect U.S. military officer counterpart. Steve Lebens, who portrays Roger Spelding, is the perfect father while Kelly Cronenberg in the role of Reba Spelding plays his wife. Noah Bird, who plays Conrad Mayberry really convinces us of his strong beliefs portraying the perfect counterweight to his love, Megan Graves, playing the role of Ellen Spelding. This production could not have worked as well without the strong teamwork.

I was not happy with the inclusion of two intermissions. Even my neighbor in the seat next to me commented that the second intermission – in his opinion – disrupted the audience’s attention level. Considering I was going to make the same comment, I puzzled as to the viability of two intermissions –  since the last act was only about 20 minutes.

As Kreton states during the play, “We use 100% of our minds; you humans use only 5%” and Conrad adds “Or less”. Such dialogue is peppered throughout the play, despite the play being written over 50 years ago. Mr. Vidal provides evidence of a superb job of accomplishing the impossible – writing a play that still rings true in 2011.

The mission of American Century Theater is to provide such theatrical gems from the past to a new generation today. While I was leaving the theatre,  I was thinking of the supercomputer’s lines in the Movie WarGames: “Maybe the only winning move is not to play!” ACT has a winner, so plan your visit now!