Much Ado About Nothing at Taffety Punk Theatre Company

Shakespeare is well known for for his original all-male casts, but Taffety Punk Theatre Company’s all-female cast throws a comedy wrench in the already hilarious story of the bickering and bantering Benedick and Beatrice. Director Eleanor Holdridge’s vision creates a world unique to the Shakespearean characters and easily wraps Southern personas around the traditionally aristocratic leads. Though the laughs are non-stop, the low masculinity level is obvious as players fought to fit male characters around their shoulders. 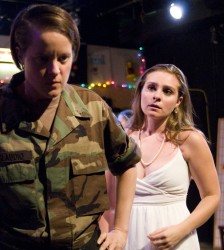 Esther Williamson as Claudio and Betsy Rosen as Hero. Photo by Teresa Castracane.

The Riot Grrrls production sets the stage in a nick-nack smothered Southern Bar room welcoming their local ‘boys’ home from the war front and fills the gaps with the Southern staples of accents and alcoholism. Costumer Sarah Kendrick seals the play’s success with spot on gentleman’s suits, the all American military uniform and classic sundresses, while tight, slicked backed hair solidified our Riot Grrrls as men. Musician Kathy Cashel leads the audience from scene to scene with heart wrenching ballads and upbeat Southern tunes that wrap the whole piece in a big, musical bow.

Love interests Beatrice (Tonya Beckman Ross becomes a snappy firecracker of a Southern Belle and easily overpowers any other presence on stage) and Benedick (a perfectly slacked-jawed and ignorant love bird played by Kimberly Gilbert) unwittingly battle against good natured friends and less then worthy foes to secure their eternal happiness in each other’s arms. Claudio (a stereotypical awkward male archetype played by Esther Williamson) and Hero (Betsy Rosen’s all-American girl) also face challenges as their wedding looms on the horizon. 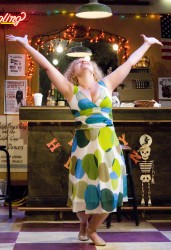 Antagonist Don John (a menacing, but ineffectual Tiernan Madorno) and henchman Borachio (a delightfully harsh and grungy performance by Katie Molinaro) try their best, but cannot compete against the power of true love. Hero’s father, Leonato (a surprisingly, if quiet, stalwart male performance from Jessica Lefkow) and family fried Don Pedro (the manliest ‘man’ of the show) do everything they can to keep the dual love birds together.

The combination of gender swapping and removal from Shakespearean England lift what might have been an otherwise easily skip-able show to new comedic heights, but it wasn’t enough to hide the uncomfortable vibes exuding from the cast at moments. A stronger hand at the director’s wheel and more precision to the male roles could launch this piece from funny and entertaining to a Riot Grrrls triumph.