I was there on opening night of Parade on Broadway at the Vivian Beaumont Theater in Lincoln Center on December 17, 1998, and it was one of the most moving and emotional nights I have ever spent in the theatre. I can happily report that Ford’s Theatre and Theater J have co-produced a mesmerizing, powerful,  heart-breaking, and beautifully sung production of Parade, directed with a firm hand by Stephen Rayne (The Heavens Are Hung In Black and Sabrina Fair here at Ford’s). Parade is filled with numerous stunning vocal performances by the entire cast – some of the best singing I have ever heard in a DC area production.

Parade, with music and lyrics by Jason Robert Brown and book by Alfred Uhry, is based on the life, trial and lynching of Leo Frank (Euan Morton) – a Jewish ‘Yankee’ superintendent of the National Pencil Company in Atlanta, Georgia. Franks was falsely accused of murdering a young female factory worker named Mary Phagan (Lauren Williams), in 1915. Parade is more than a historical recounting of miscarried justice and the murder of an innocent man. It’s also about the ever-growing determination of Leo’s tough-as-nails wife Lucille (Jenny Fellner), who believes that working together they can force justice to prevail, even in a city and a state and a country filled with hate and anti-semitism. 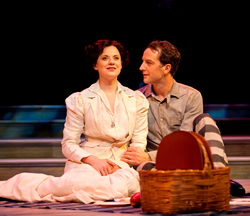 He may be a good Scottish lad, but Euan Morton makes a wonderful shy, numb, stunned, and frustrated Leo Frank. Morton’s gorgeous tenor voice is heard in “How Can I Call This Home?” – a funny yet eerily prophetic song about not fitting in to his new Southern surroundings. His assertive yet heart-breaking statement at the end of his trial, “It’s Hard to Speak My Heart,” slowly builds to a crescendo of emotion, and his spine-tingling recitation of the “Sh’ma,” as he is about to be hanged, is simply devastating. Rarely has a quiet performance been so powerful.

Lucille doesn’t have a solo until the end of the first act, but luckily for her and the audience, Jason Robert Brown has written her the powerful “You Don’t Know This Man,” where she ‘introduces’ her husband to the town reporter Britt Craig (Chris Sizemore) who, like the entire community, has already lynched Leo without even making any attempt to find who this quiet, hard-working and caring man is. Jenny Fellner, who until now has played a woman who has shown little warmth, sings it gloriously. It’s the first time the audience sees her inner strength and determination to fight for Leo’s freedom.

In the second act as her husband still refuses to have her help regain his freedom, she finally stands up to Leo and scolds him in “Do It Alone.” You can only imagine the divine harmonies that enveloped Ford’s Theatre when Euan and Jennifer sing the ironic but loving duet “This Is Not Over Yet.” It’s the first time and the last time in Parade that they share a kiss and show real affection for each other.

A star was born at Ford’s Theatre! The performance that received the most applause all night was Kevin McAllister, whose gorgeous baritone ripped through the audience as he played Jim Conley and Newt Lee – a cleaner and night watchman at the Pencil Factory, where the infamous murder took place. At the trial singing “That’s What He Said,” Conley lies that he helped Leo Franks cover up the crime, and McAllister’s scene-stealing performance and vocals made the audience whoop it up.

McAllister opens the second act with the high-energy and funny Kellee Knighton performing an ‘eye-rolling’ “A Rumblin’ and a Rollin’.” As Governor Stanton’s two African-American domestics, they jokingly ponder if anyone would have even cared if the murder victim in this case had been black. It’s the closest thing to comic relief that we get in Parade, and McAllister and Knighton’s rendition emits some well-needed laughs.

As Governor Slaton (Stephen F. Schmidt) reopens the case and begins investigating the evidence, Jim Conley is back in jail – now charged as an accessory to the murder of Mary Phagan. Conley refuses to change his story even though the Governor points out the  inconsistencies in the story he told at the trial and the evidence. Conley and his fellow convicts on the Chain Gang refuse to cooperate as McAllister leads them in “Feel the Rain Fall.” McAllister’s velvety voice glides up and down the scales and is simply goosebumply.

James Konicek plays and sings the role of the crooked ‘Snidely Whiplashy’ prosecuting attorney  – who has political ambitions – with venomous perfection. His opening remarks at the trial “Twenty Miles From Marietta” is a work of art, and his riling up of the natives in “Where Will You Stand When the Flood Comes?” sung with Tom Watson (Will Gartshore – tenor extraordinaire – the owner of a editor of racist newspaper, the Jeffersonian) – creates a frenzy that leads to Leo Frank’s kidnapping. Sandy Bainum, playing Mary Phagan’s grieving mother – wrings every ounce of emotion out of her heart-breaking and vengeful “My Child Will Forgive Me.”

The other members of the incredibly talented ensemble, who play multiple roles are Christopher Bloch, Carolyn Agan, Erin Driscoll, Michael Bunce, Matthew John Kacergis, and Bligh Voth. They also contribute to the gorgeous harmonizing on “The Old Red Hills of Home,” “The Dream of Atlanta,” and “Where Will You Stand When the Flood Comes?”

Karma Camp’s choreography keeps her cast on the move with their parasols twirling and newspapers unfurling, and in one scene, Leo Franks has an uplifting moment. Costume Designer Wade Laboissonniere has created some simple but elegant gowns in soft shades of purple, greens, tans, browns, and some wonderful straw hats with feathers. Music Director Steven Landau, who also plays keyboards, and his orchestra of eight other fine musicians, play Jason Robert Brown’s score with gusto and beauty. There is some divine playing by Cellist Drew Owen and Bassist Frank Higgins.

Tony Cisek’s clever set design reflects Atlanta’s industrial district. It’s multi-level with red brick arches and iron work, with stairs that lead to the second level, where a lot of the action occurs. There are marble columns on the right and in the back of the stage.

The orchestra sits in the back of the second level – a brilliant choice because their sound is well-balanced and they never once overpower the performers. David Budries & Charles Coes created the crystal clear sound design. Pat Collins contributed the lighting design.

Jason Robert Brown’s Tony Award-winning score for Parade is filled with gorgeous ballads, hymns, marches, and waltzes. Alfred Uhry’s Tony Award-winning book not only tells the true story of this miscarriage of justice, but also includes the love story of Leo and Lucille, and this makes it so much more emotionally devastating when Leo is hanged.

After the execution of Troy Davis (who many people believed was innocent after many of the original witnesses recanted their testimony) in a Georgia prison this past week still embedded in my brain, Parade has extra meaning for me. In this theatre where another act of violence and hatred occurred on April 14, 1865, we are forced to encounter more hatred and another untimely death. Parade is brutally honest and brilliant theatre.

Run to Ford’s Theatre and see this brilliant production – before this Parade passes by.

Watch a preview video of Parade and an interview with Director Steve Rayne.

Running time: Two hours and 30 minutes plus one intermission.