Adventure Theatre premieres its 60th season with Lilly’s Purple Plastic Purse, a play about an enthusiastic mouse and her friends, based on the beloved children’s book by Kevin Henkes.

Scenic Designer Joseph B. Musumeci, Jr. creates a textured, bluish-green colored set compiled of cloud-shaped cutouts, with doors and drawers built into the walls that later prove to conceal props, as well as a screen that shows pictures throughout the production. Lighting by Brian S. Allard and sound by Neil McFadden work together to make the tone and moods of the characters come alive. During most of the play, mottled, marbled lighting creates a dreamlike atmosphere, while soft, tinkling music plays in the background. These effects change to show emotional range when needed, such as anger, jealousy, sadness, and joy, and they do so subtly and effectively. Costume Designer Kendra Rai dresses the characters in bright, patterned garments that appeal to a child’s eye, and completes the effect with mouse ears and tails. 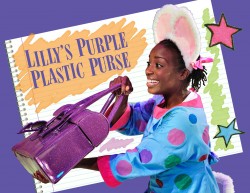 The play begins with the introduction of Lilly, wonderfully played by Felicia Curry. Lilly is an adventurous and bold character, whose unique personality seems to intimidate her peers. Two mice named Chester and Wilson, played by S. Lewis Feemster and Elliot Kashner, rebuff Lilly’s friendliness. They ask why she is covered in band-aids, and her response is, “They make me look brave, and when I look brave, I feel brave.” This courage holds true when a gang of bullies corner Chester and Wilson, and Lilly saves them both, creating a strong friendship with both mice.

Felicia Curry maintains high-energy and exuberance as we are taken through a series of Lilly’s “adventures.” This includes school activities, sibling rivalry with her baby brother Julius (hilariously portrayed by Troy Jennings), shopping for the infamous purse, and interaction with peers and adults. Lilly learns some important lessons in friendship and love, and it is not shown in a condescending, heavy-handed manner that sometimes sneaks its way into child-specific productions. The wacky expressions of the characters are particularly enjoyable, and at times yield laugher from the adults…that are louder than the children’s. The audience is situated in a semi-circle around the stage, and the actors ensure that their movements provide everyone with a good view of the action.

As the performance I attended was sold out, there were a lot of children present, and the noise level before the show began was extremely high, and the environment was wild and rambunctious. However, with some polite shushing at the beginning, the children settled down, and the characters held their rapt attention. There was a ton of laughter and gasps of surprise, with the occasional child yelling out advice to a character, and making the rest of the audience laugh. Lengthy for a children’s show, at almost an hour and a half, the lack of antsy fidgeting from the audience was a welcome surprise. The adults did seem to enjoy the show as much (if not more so!) than the children. Something about watching other adults abandon all decorum onstage and behaving like children is extremely enjoyable to watch. Full of fun and never lacking in excitement, I highly recommend Lilly’s Purple Plastic Purse for an afternoon of family enjoyment.

Running time: 80 minutes without an intermission.