When The Stars Go Out at Mead Theatre Lab at Flashpoint

When you attend a workshop piece, it’s understood that certain characters or aspects of the story will be incomplete or still developing, but Stephen Spotswood evolving When The Stars Go Out more than exceeded expectations. The eerie and heartwarming unraveling of the pregnant protagonist’s mind is beautifully contrasted by the support of the loyal followers Spotswood and his collaborators have so expertly built around her. The modern romance isn’t dead; it’s just evolving to include all the different relationships and the technologies that facilitate a relationship. 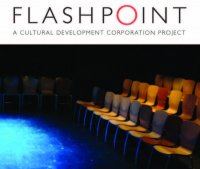 Nerdy and successful Naomi (Megan Reichelt’s unbelievably strong presence shone through her role, but one couldn’t help but feel that the character was not meant for her) waits for a long, long distance phone call from her astronaut husband Micheal (a quirky and intense, but sometimes sappy Christian Sullivan). Reichelt and Sullivan played off of each other’s vibrant emotions, whether it was during touching flashbacks or the smallest interaction on screen and off.

Naomi fights through her hormone induced hallucinations with the help of close friend Esteban (Brandon Mitchell’s successful stereotype shattering performance), lovable intern Polly (the underutilized, but wonderfully bright interpretation by Alison Talvacchio) and slightly crazy mother (a perfectly panicked and paranoid Gwen Grastro). Each secondary character represented an answer to each of Naomi’s issues and strategically helped her work her way through them, without her ever noticing.

The show’s greatest triumph was the successful use of pre-recorded scenes that flashed throughout the current timeline and the story filled flashbacks. Director and Set Designer Jay Brock perfectly interpreted Spotswood’s script and built a world to match the drama developing around the pregnant Naomi. LIghting designer Kevin Boyce deserves his spot in the lighting hall of fame for his clever use a soft colors and and emotional lighting in

Absolutely still a work in process, When The Stars Go Out is a true success story from the people behind the Mead Theatre Lab at Flashpoint, but one that is already worthy of more shows. The collaborative art process can be a wonderful way to create art and Spotswood expects to present his show, with some edits, sometime in 2012.

The show has closed.