As a daughter of the South, I knew I had to expose myself to E. Patrick Johnson’s Sweet Tea. Where else would I find an exploration of Black men of the South who just happen to be gay? 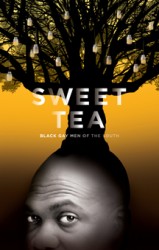 Based on his award-winning and critically acclaimed book of the same name, Johnson takes a risk and plunges head first into the difficult subject matter of gay Black men living in southern states. This one-man show answers the questions many are afraid to ask. Told through the words of several gay Black men, the play examines the triumphs, disappointments, perceptions and hardships of living a life still frowned upon today by a large population.

Directed by Rajendra Maharaj, Sweet Teaopens with Johnson’s singing and humming, “Hush, Somebody’s Calling My Name,” and tells us that he’s giving a voice to his “queer ancestors” as he shares their stories. Johnson’s characters endure childhood bullying for being gay, hide behind the birth of a child, comes out to a parent, loses friends to AIDS, and tries to find love despite it all 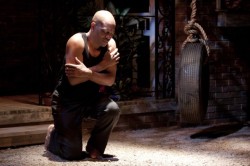 Although some of the stories were interesting and at times captivating, Johnson did not seem to distinguish any of them from a person living outside of the South. Many of his characters could have been any gay Black man living in New York, Delaware, Colorado, California, Massachusetts, and a great deal of other states. I kept wondering how living in the South as a Black gay man was any different than living anywhere else. I pondered but never received an answer.

Johnson flows effortlessly from one character’s dialect or accent to the next with gentle flair. His ‘Old queer’ lightly stirs the sweet tea and tells how he found a way to love when people around him didn’t know his secret. A pastor preaches about the sins of being gay all the while resisting the urges to give in to what he desires. Johnson’s quip about Bishop Eddie Long’s legal battles didn’t go unnoticed by me or the audience. We howled in laughter at the irony.

Signature Theatre’s Ark is a small, intimate and wonderful theatre. The set, designed by Klyph Stanford, fits perfectly within its walls. A country style porch stretches from one stage end to the next, complete with white screen doors, a tire swing and bench. A mixture of burgundy, yellow and cream flowers hang subtly from pots right beside the weeping willows. Curtis V. Hodge’s lighting works amazingly with Johnson’s flashes across stage in a letterman’s jacket, pastor’s robes, or struts in heels as he sings Patti LaBelle.

People may never fully understand what it means to be a Black gay man of the south, but watching Sweet Tea will provide a bit of insight. If you want to know a little more about this nearly untouched subject, buy a few tickets and catch this show at Signature Theatre. 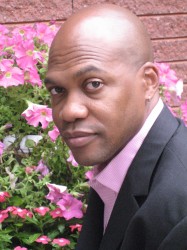 Running time: 90 minutes with no intermission