Cyle Durkee: Figuring Out ‘Arts and Theatre’ With Joshua Morgan and Brian Sutow

We live in a glorious city. Now, sometimes living near a totally polluted regional landmark (I mean the Capitol building, not the Potomac [wouldn’t it be great if you could pay a nickel at the grocery store and have politicians cleaned up?]) can make one frustrated and a bit depressed. I understand and I say, “Look at the wonderful things we are provided with here.” As humans we have access to all kinds of amenities that are totally lacking in other cities of our size. We have an amazingly large suburban sprawl that will sicken invaders unto death before they come anywhere near our actual urban citizenry. And we have Art! Wait! We have *good* art.

Now, some will dispute this and that’s fine. But another thing we have here are intelligent artists (who knew). So we will rebut with precision and passion (does that sound sort of filthy?).

And at the head of the line of rebutters (or re-margarines for the more health conscious) will be Joshua Morgan and Brian Sutow (Co Artistic Directors of No Rules Theater Company and delightful humans). We sat down recently and sharpened our claws in preparation for the inevitable battle that will be fought over arts funding in this city and country. We did this by discussing our views on the arts today (pros and cons) and then explaining what we are doing to move the arts forward. 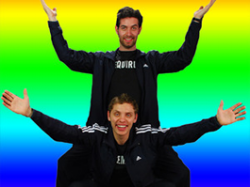 Now there are a lot of interesting things to discuss. One of those things is the role of the artist in a theatrical situation. Is your job just to read the lines out loud (maybe at a staged reading)? Is your job to strike off on your own and leave others behind (sure, for the truly ego driven artist)?  Is your job to absorb the adulation of the crowd (that is a result, not an action)? Your job is many things. Probably too many things to discuss in perfect detail here, but we will touch on a few salient points:

(1)  You are a capacitor and a conductor (if you are frigid enough to reach -170 degrees you can be a super conductor [and single]) and a converter (that’s why The Book of Mormon is so popular). You are there to absorb the energy that is given to you (occasionally forced on you with a super creepy stare [I apologize]) and convert it internally. The energy that you then give out is (hopefully) useful to the audience as a catalyst for change. Change may come in the form of laughter that lifts them out of their lives and gives them a clearer picture of their dilemmas. Change may come in the form of a new perspective that this performance will give them (and if you’re lucky and talented you might actually change someone’s mind for the better). Change may come in the form a a purely physical release (I was talking about crying…you’re gross.).  You as an artist are a catalyst for societal change.

(2) You are a creative force (you may or may not need to be reckoned with, that’s up to your stage manager). You are there to float free of the ties that bind normal human thought. You get to crawl up the side of the box (stop being gross) and, once at the top, describe (as precisely as possible) everything that can be seen before balance is lost and you either tumble back down into the heap with us (or [more likely] become lost to madness and spend the rest of your days surrounded by multinational prostitutes in an exotic opium den [that happened to me {twice}]).  You get the honor of thinking the thought first.  Seeing the sight first.  Being the being first. And then you have the joy of showing the world all about this new insight/creature/tool.

(3) You are a lightning rod. You are a revolutionary. You are placed on the front lines of change simply by virtue of the profession you chose. So experiment. See what inside you stirs those around you to action. Study the world and figure out how you want to make it better. Then go do a project that shows people how to follow you to this better space. Find as much beauty in this world as you can and share it with as many people as you can. That’s your job. That’s what you do. That’s what you are.

So after Joshua, Brian, and I finished with that small talk we got down to the real business. But that’s an article for another time.  e have just enough space left to say, “Thank you Joshua and Brian for the inspiration and the time.”

Up next in DC is the world premiere adaptation, Peter Pan: The Boy Who Hated Mothers. Award-winning playwright and director Michael Lluberes is at the helm of this new production, which promises to be a dark visceral new take on the iconic tale. Lluberes will restore author J.M. Barrie’s original intentions for the story by having the part of Captain Hook be played by a woman (NRTC company member Lisa Hodsoll). An exploration into the joys and dangers of the human imagination and growing up, this will be one the whole family will not want to miss. Peter Pan: The Boy Who Hated Mothers. will be at the H Street Playhouse February 8th-March 4th.

Finally, the 2011-2012 DC Season closes with the DC premiere of Andrew Hinderaker’s brilliant new play Suicide Incorporated. Directed by Co-Artistic Director Joshua Morgan and featuring Co-Artistic Director Brian Sutow, this tragicomic tale tells the story about a business that helps its clients perfect their suicide notes, and the new employee who might have other motivations. The show was hailed in the Chicago Tribune as, “…a hugely exciting new play,” and “A deeply moving inquiry into what lives are worth.” Suicide Incorporated will be performed at The H Street Playhouse from May 30th to June 23rd. To learn more about the company, please visit No Rules Theatre Company’s website.