Riverside Center Dinner Theater presents the multiple Tony Award-winner and crowd favorite, Dreamgirls, a musical about a talented and hopeful trio of young singers, and what happens when they encounter the competitive world of the music industry, inspired by the famous real-life act, The Supremes. Patrick A’Hearn beautifully directs this production written by Tom Eyen, with music by Henry Krieger. 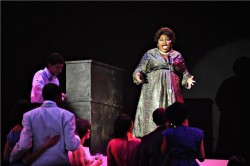 Producer Rollin E. Wehman said in his opening comments, “I’d say sit back and enjoy the show, but you’re gonna be on the edge of your seat with this one.” His words held true, starting at the very beginning when the curtain rises on the set of the Apollo Theater. Scenic Designer David P. Stock illustrates the brightly lit stage of a talent contest, with towers of stage lights that are continuously moved around throughout the production to coordinate with the upbeat choreography by Christopher Noffke. Lighting design by Phil Carlucci superbly enhances the tone, whether it involves flashy, colored spotlights or a somber, subtle haze. What I found particularly interesting about the lighting is the fact that Carlucci made sure that the character’s silhouette was always shown in their spotlight, which added depth and poignancy. Costume Designer Gaye Law resonates the sixties and seventies through flashy suits, exaggerated wigs and hairdos, bold, fringed gowns, feather boas, and sparkling dresses that threaten to blind you if you dare to look too closely. There is superb musical direction by Jason J. Michael  that rounds out the mood-setting elements, from which this plot can thrive.

The strong Effie White (Kadejah Oné), sweet Deena Jones (Ashley L. Ware), and sassy Lorrell Robinson (Carlita V. Ector), make up The Dreamettes, a Chicago-bred singing group that travels to Harlem with their composer (and Effie’s brother) C.C. White, played by DeMarcus Bolds, with hopes of being discovered. They prove their talent with “Move, You’re Stepping on My Heart,” and grab the attention of Curtis Taylor, played by Lessinger Grimes, an ambitious Cadillac dealer that convinces them (with a lot of hesitation from Effie) to take him on as their manager and sing back-up for James Thunder Early, played by JoNathan Michael, a swaggering, over-confident ‘soul’ singer.

They begin a successful tour around the U.S., but become frustrated when a poppy vocal group, Dave and The Sweethearts, covers and steals their aria, “Cadillac car.” Curtis decides that the time is right for The Dreamettes to have their own tour and re-christens them ‘The Dreams,’ and then announces that Deena will sing lead vocals. This causes a lot of friction between Effie and everyone else, as she feels that Curtis, whom she has fallen in love with, only chose Deena as lead singer because of her looks, saying; “Deena’s beautiful, she’s always been beautiful, but I’ve got the voice!” 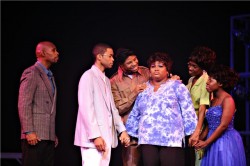 As Curtis shows Deena more attention, Effie’s jealousy rises to the breaking point, and she becomes increasingly difficult to work with when he again changes their name, this time to ‘Deena Jones and the Dreams.’ After a replacement is brought in, Effie vehemently protests in the form of a powerful song called “(And I’m Telling You) I’m Not Going,” which I had been anticipating since the beginning of the first act. It seems that I was not alone in this, as premature applause broke out during the first lines, before a stillness swept throughout the theatre. The entire stage grew dark, except for a single spotlight, and Oné delivered one of the most passionate performances I have witnessed this year. The raw sadness and desperate, angry nature of the song chilled me down to my fingertips, and was followed with what was possibly the most enthusiastic applause I have ever been a part of.

The second act of the show is filled with entertaining numbers, my favorites being a heated “Ain’t No Party,” performed by Jimmy, Lorrell, and The Tuxedos, and RAP, an energetic song lead by Jimmy, with exciting, trumpet-slinging choreography in the background. Regret, compassion, strength and forgiveness dominate the second half of this powerhouse show. The cast oozes with talent, and immensely fun to watch.

Wehman kept his promise; I was on the edge of my seat the entire time!