Romeo and Juliet at Synetic Theater

Synetic Theater’s silent Shakespeare festival, ‘Speak No More’, is capped off with a revisited production of Romeo and Juliet. Their original production of the show received critical praise in 2009, garnering six Helen Hayes Award nominations and two wins. Romeo and Juliet is a classic out of Synetic’s playbook and evokes the same fascination as their recent work. 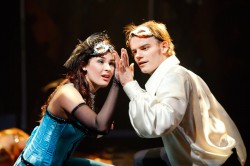 Natalie Berk as Juliet and Alex Mills as Romeo. Photo by Graeme B. Shaw.

Rather than being shackled down by their loss for words, Synetic’s performers are freed to draw singular focus to their motions and facial expressions. While it is avant-garde, their method is accessible, particularly when combined with a story as well-known as Romeo and Juliet. Paata Tsikurishvili’s direction, for which he received a Helen Hayes Award in 2009, draws us through the familiar story but entices us with Synetic’s distinctive flair. Alex Mills and Natalie Berk bring a beautiful life to the love between their respective Romeo and Juliet, lightly interacting in sweet bursts in contrast with the rough and lustful behavior of Mercutio (Philip Fletcher).

Irina Tsikurishvili’s energetic choreography makes use of all the athleticism of Synetic’s talented performers. One of the most stunning moments of the production is watching the effortless spins and flips of Philip Fletcher and Irina during their principal scene together, a lewd humorous encounter between Mercutio and Juliet’s Nurse. The fight between Mills’ Romeo and Ryan Sellers’ Tybalt is stage combat at its best. Moving beyond the light acrobatics of Fletcher’s Mercutio, Romeo and Tybalt’s battle is far more aggressive with grief-stricken lunges and swordplay. Every movement tells a story in Synetic’s productions, and that’s at the core of what makes their combat so appealing to watch.

Without Shakespeare’s words to tell the story, Synetic relies not only on the expressive movements of their talented performers but on technical creativity to use lighting, sound, props, and set design to create a unified experience. At the center of this effort is Konstantine Lortkipanidze’s score, a mix ranging from classical orchestrations to techno dance beats, and it sets the mood of every scene in coordination with Lortkipanidze’s and Irakli Kavsadze’s sound design. Though the sounds primarily lend focus and clarity to each scene, in a few instances some dramatic repetitive tones were instead distracting. 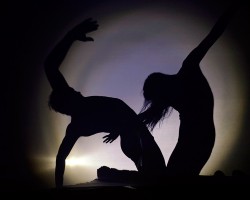 Alex Mills as Romeo and Natalie Berk as Juliet. Photo by Graeme B. Shaw.

As always, Synetic’s lighting, designed by Colin K. Bills, sets the mood and expertly focuses your attention. Of particular note is a love scene between Romeo and Juliet performed by casting their shadows onto a white sheet. Anastasia Simes’ set is composed of an arrangement of giant clock parts: gears, cogs, and a pendulum, lending to the thematic impending passage of time. Verona may have never looked so mechanical, but the set is believable and engrossing.

Synetic Theater is well known for its silent renditions of Shakespearean works and Romeo and Juliet is at the core of that body of work. Though the ending is no mystery, Synetic builds a tension that keeps us in the moment with Romeo and Juliet, experiencing the full arc of their story.