‘A Quick 5’ With Stephen Cole

Stephen Cole is the lyricist and or book writer for the musicals The Road to Qatar!, The Night of the Hunter, After the Fair, and Saturday Night at Grossinger’s. He has collaborated with Claibe Richardson, David Krane and Matthew Ward. I am a fan of Stephen’s work, and I hope his work will be produced more around the country.

When did you first become interested in writing for the theatre? 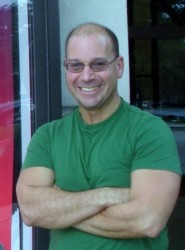 From the moment I saw my first Broadway musical (Hello, Dolly starring Betty Grable) I knew I wanted to be part of this. I began my career as an actor and singer when I was fourteen as an apprentice in summer stock at the Lake Placid Playhouse. Another apprentice was Charles Busch, who alone with his friend Andy, had written the book of a musical and asked me if I could write the songs. I have no idea how they knew I could (I didn’t know either), but I wrote my first song that summer and when I returned home I said to myself, “If they can write a musical, so can I!” I sat down and started typing. One year later, while I was still in High School, my first complete musical comedy (called Everything’s Fine!…a loving homage to Cole Porter shows of the 30’s…if you’ve seen Anything Goes, you’ve seen Everything’s Fine!) was produced at Brooklyn College. From there on there was no stopping me.

I consider your late collaborator Claibe Richardson to be an underappreciated genius. What are some of your memories working with him?

I was a great fan of Claibe’s work, especially The Grass Harp and Lola, so when I was looking for a composer to write a musical of Time after Time with me, I looked his name up in the phone book and called him. We met, he liked my work and although he didn’t think he was the right composer for that project (he didn’t like writing contemporary music), we began kicking ideas around. He told me he had always wanted to musicalize The Night of the Hunter. After watching the film I was skeptical, but after reading the poetic and moving novel, I was sold. The funny thing was that Claibe also brought me in to do a total rewrite of a show called Grossinger’s, so we wrote both at the same time, juggling the Jewish Catskill music with The River Jesus. Claibe always said that he was the last composer not influenced by Sondheim. He came from an older school of composition and was more like Rodgers or Kern. I remember leaving his apartment after hearing something he wrote to one of my lyrics and saying to myself, “You will never have more beautiful and lush music coming your way.” My great regret was that he died early and never saw the very successful productions of both Saturday Night at Grossinger’s and The Night of the Hunter. But I continue to keep those works alive and hope he is listening.

What is your favorite genre to musicalize?

I have adapted novels, short stories, plays, and also done several originals. I think that when you get an original story right, it is very gratifying, but I love taking a short story that needs fleshing out and turning it into a musical. The only reason to take another piece and musicalize it is if you think you can improve on it. Thomas Hardy’s short story, On the Western Circuit became After the Fair only when I fleshed out and enlarged the male characters, giving them more reason to be in the story. Working on both Time after Time and The Night of the Hunter forced me to come up with the why and wherefores of two very different serial killers and to make them, if not sympathetic, understandable. Lately though, I am delighted by doing originals that draw on my life and are as fun and funny as can be.  It changes with the project.

What is the toughest part of writing a new musical in these economic times?

Of course the answer is getting the show on the stage. I have been extremely lucky (and resourceful) over the years. My first professional production was in 1995, Dodsworth starring Hal Linden and Dee Hoty and this led to many other productions of my shows…but now, it seems that having a great show isn’t enough as you are competing against revivals, revisals, and shows created by producers. Even producing a reading is a major investment these days! Everyone expects a reading to be the finished product and the demo to be the original cast CD. Also, regional theatres are taking less chances on new musicals.With audience dollars diminishing, they feel they must serve up familiar titles and when they invest in shows, they tend to be Broadway shows that are semi-sure things that they can then bring to their audiences. Several years ago, this was not the case. I think this will not change back to the way it was.

Is there a production of any of your works coming up in the near future? 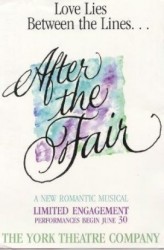 It’s advertising time! The next production I have coming up is January 30th. A concert version of my award-winning show After the Fair (composed by Matthew Ward). This will not only be a live concert directed by Gabriel Barre, but will be recorded by WBAI radio for future airings. Very excited about that. Time after Time, directed by Kevin Gray, comes in March at the Haart School of Music. And of course the original cast CD of The Road to Qatar! is newly available on Amazon, Jayrecords.com and at whatever CD stores still exist.

In May, I am off to Acorn Theater in Michigan to do a workshop of my spanking new original musical, Merman’s Apprentice starring the great Klea Blackhurst. I keep plugging away!

Watch highlights from Point Park University Conservatory Theatre Company’s world premiere musical Time After Time at the Pittsburgh Playhouse. Book and lyrics by Stephen Cole, and music by Jeffrey Saver, based on the novel by Karl Alexander. Directed by Gabriel Barre.

Watch and listen to Barbara Minkus sing “It’s All About Me” from Saturday Night at Grossingers.

Watch a documentary by David Krane of The Road to Qatar! here and here.

Purchase these three CDs of Stephen’s work:
After The Fair.
The Night of the Hunter.
The Road to Qatar!