Theatre Kibbitz: An Interview with Ken Ludwig on ‘Twas the Night Before Christmas at Adventure Theatre and Other New Works 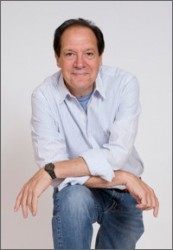 You may have bumped into Ken Ludwig recently at a Virginia high school or a children’s theatre in Glen Echo Park or in a theatre in London – because this prolific writer is a busy man. His ‘Twas the Night Before Christmas is selling out and entertaining young audiences at Adventure Theatre. His new play Midsummer/Jersey recently gave high school actors a thrill of a lifetime. I am so honored that Ken found time in his busy schedule to do this interview. Thanks Ken!

When were you asked to write a play for Adventure Theatre, and how did you get the idea to base the play on ‘Twas the Night Before Christmas?

I was asked by Michael Bobbitt over a year ago, when we bumped into each other in New York City. He asked me to write the Christmas show for Adventure Theatre and I was delighted, but he needed a title rather quickly and I hadn’t written the play yet.  So I came up with ‘Twas The Night Before Christmas, thinking that I’d base the play somehow on the Clement Moore poem.

How long did it take you to write it? Were you involved in the casting and rehearsals? 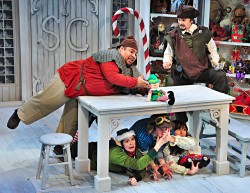 It took me about 2 months to write it, but then again it’s based loosely on stories that I used to tell my children at Christmas time.

Yes, I was very involved in casting, and I’m pleased to say we ended up with the five absolutely perfect actors for this play. I was involved in rehearsals to some extent but with a director as great as Jerry Whiddon, there wasn’t much for me to add. I mostly attended run- throughs and previews, which gave me ideas for a few re-writes.

Did you attend the opening night at Adventure Theatre, and what did you think about the production?

I did attend the opening performance and I think the production is spectacular.

Have you written any other plays or stories for your children?

No, I’ve never written any children’s plays or stories before, but I certainly made up children’s stories to tell my children when they were young.

Why is it important to write for children’s theatre and to get children into the theatre?

I think it’s enormously important to write plays that children can attend because theatre-going is a habit – you want to start it early. Theatre opens our imaginations in a way that nothing else does and we want our children to experience the sense of humanity that theatre embodies.

Another one of your plays – Midsummer/Jersey started performances on November 17, 2011 at James Robinson Secondary School, in Fairfax, VA. Why did you decide to try out the play at a high school and why this specific one? Are there high school performers in the cast? 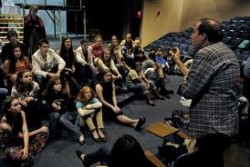 I wrote Midsummer/Jersey specifically for high schools and colleges and so it made all the sense in the world to have the world premiere at a high school. We chose James Robinson because they have such a terrific theatre department. There were only high school performers in the cast.

What’s the show about?

The show is a re-telling of A Midsummer Night’s Dream set in the here and now on the New Jersey shore.

What have learned so far about the play while watching the first few performances?

I was delighted to see that the high school kids loved performing something as challenging as a re-telling of a Shakespeare play. I was equally delighted that the audience seemed to enjoy every second of it.  They really “got” the fun of the interplay between the two sources: Shakespeare and modern teenagers.

Another one of your new works The Games Afoot is also premiering and the end of this month at The Cleveland Playhouse and it will be directed by one of my favorite directors – Aaron Posner. What is the show about and why did you choose Aaron to direct it? What ‘touches’ has Aaron given the production that really impresses you? 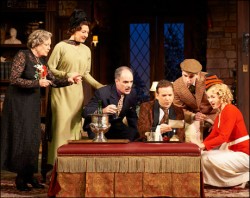 The Game’s Afoot is a comedy-thriller set in the 1930’s about a famous Broadway star who invites the cast of his latest hit to his castle on the Connecticut River. During their glamorous weekend together, a murder is committed.

Aaron Posner has impressed me in every way. He is a master at what he does and he has brought his artistry and really fine sensibilities to this production which just started performances last weekend.  I’m thrilled to say that the audiences are adoring it.

I hear you have written a new ending for your Tony Award-winning musical Crazy for You? What’s the new ending, and how did the audiences respond to it? 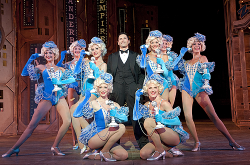 Sean Palmer and dancers in ‘Crazy For You’ in London.

The audiences in London seem to love the new ending to Crazy For You and the cast really got a kick out of putting a new scene into an established musical.  I can’t tell you the ending, you have to go to London and see it.

Any interest from Broadway producers to bring it back to The Big White Way?

Yes, there is a ton of interest in bringing it to Broadway.

What musical that is on Broadway now do you wish you would have written?

The Book of Mormon because its so funny and terrific.

You are so prolific. What other ideas for plays are in your mind now as you are responding to these answers?

I have three new plays in mind at the moment and I can’t wait to start writing them.  One of them is an adaptation of a European 19th Century Classic  But I can’t start working on them until I finish the manuscript of a book I’m writing for Crown Publishing which is due in a couple of weeks.  It’s called How to Teach Your Children Shakespeare.

Watch a preview video of Crazy For You in London.