Equivocation at Arena Stage at the Mead Center for Performing Arts

Equivocation is the history-based thinking man’s drama that is currently making its Washington D.C. premiere in the Kreeger Theater of Arena Stage. Playwright Bill Cain explores the topics of politics, religious intolerance, morality, guilt, family, and “revisionist history” in this work. The play debuted at the Oregon Shakespeare Festival in the Spring of 2009, and the same accomplished troupe brings the production to this region. So unsurprisingly, the work is based in Britain, during the 17th century. Homage is paid to the Bard by the insertion of the central character of Will Shagspeare (Anthony Heald). 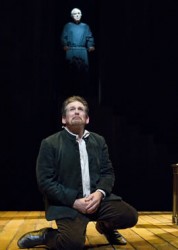 Richard Elmore as Father Henry Garnet and Anthony Heald as Shag in the Oregon Shakespeare Festival’s 2009 production of ‘Equivocation.’ Photo by Jenny Graham.

The pivotal, event on which the play is based, is the Gunpowder Plot Treason Plot of 1605. For many Americans this is not an incident in history that is familiar, however perhaps you are familiar with the British holiday of Guy Fawkes day? The Gunpowder
Plot was essentially a strategy by influential Roman Catholic gentlemen to blow up the House of Lords during the State Opening of England’s Parliament. The intent was to assassinate the Protestant King James I, whose vow of religious toleration for Roman Catholics did not lead to the hoped for end of religious persecution. The attempt failed as the plot was revealed to authorities via an anonymous letter. Oh, and remember Guy Fawkes, he was the military veteran caught allegedly guarding 36 barrels of gunpowder the night before the planned attempt.

Cain uses the devise of granting Shagspeare (Shakespeare any one?) and his Globe acting co-op an unwanted commission to write and produce a play commemorating the event. King James has penned a script that is granted to Shagspeare as the basis for the play. As Shag struggles with the moral dilemma of deciding what and how to write the story, we are introduced to the concept of equivocation. In the context of the time, this was a Jesuit strategy of not exactly telling the full truth regarding religious views, under oath, during times of persecution. The perplexing situation that Shag and the company find themselves in is not unlike those faced in today’s post 9/11 world.

This complicated and darkly comedic scenario is craftily directed by Bill Rauch. Elements such as a “play within a play,” using more modern and accessible language, and the actors playing multiple, albeit very different, roles are credible and captivating. There is a great deal to tackle in this production – alien and suspect history, familiar (and unfamiliar) references to Shakespeare’s life and works, and philosophical /ral predicaments. Additionally, scenes abruptly change between the troupe rehearsing their works and determining their plan to fulfill their commission. However, Rauch manages to flawlessly direct the work into a meaningful, clever, and exciting experience.

The cast of Equivocation is extraordinary. Five men and one woman recreate the troupe commissioned to write and produce the play while also embodying the characters of their troupe’s works. No one actor outperforms another, all are top notch, deft, and extremely versatile…however some moments that stood out for me included:

– Shag’s daughter Judith’s (Christine Albright), clever soliloquy on soliloquies and her droll insertions of writing devices or direction for her father.

– Will’s loyal companion and troupe partner Richard (Richard Elmore) challenging, cajoling, and sympathizing with Will as best friends do.

– The spell-binding portrayal of Sir Richard Cecil (Jonathan Haugen) as a manipulative, devious, and challenging persona.

– The antithesis of the same actor (John Tufts) portraying Sharpe the young, vain, and ambitious member of the troupe and the doomed and broken Thomas Wintour.

The show’s creative team does not disappoint either. Costumes (or lack thereof) are period pieces and the change of costume generally denotes a sharp change in the actor’s character. The costuming (Deborah M. Dryden) is integral in determining the correct person, context, and environment of the scenes. The set design (Christopher Acebo) is inventive and seemingly simplistic – but the shift in backdrops, furnishings, and props also denote specific location, events, and context. The attempt at detonating the barrels of gunpowder is especially inventive as fire and flame issue forth from the stage floor! Lighting (Christopher Akerlind) and music /sound (Andre Pluess) enhance the production and provide realistic context.

Equivocation is a deep, probing, and intricate drama with many layers and ideas to contemplate. Similar to many of Shakespeare’s works, this production keeps you on your mental toes and invites one to see it more than once to “catch” the history, references, and meanings not initially observed. The premise of the play is thought provoking and well balanced. A ‘must see’ for the thinker-types of today.

Running Time: 2 ½ hours plus one intermission.

Equivocation plays through January 1st in the Kreeger Theater, of Arena Stage at the Mead Center for American Theater – 1101 Sixth Street, SW, in Washington DC. For tickets call (703) 548-9044, or purchase them online.