‘A Quick 5’ With James Kronzer

James Kronzer is a very busy Scenic Designer in and outside of the DC area. You have seen his work at Signature Theatre, Olney Theatre Center, Theater J, and Round House Theatre. He also designs for film, television, and cruise ships as has even designed a Halloween White House display. Some recent credits include Showboat at Signature Theatre, The Glass Menagerie at Olney, and The Religion Thing which opens in January at Theater J. In NYC, his work has been seen at The Zipper Theatre and on Broadway with Glory Days. You can see his production designs on Comedy Central and on his website. 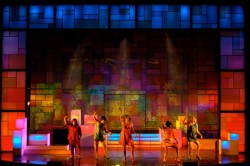 I was still in school in London doing a scenic painting course and was hired to paint some backdrops for a TV series about Opera. The backdrops were done in the style of the period which was an interesting exercise.

From beginning to end how long does it take to finalize a design for a production?

I tend to say three months is typical but can be longer depending on the scope. This is from signing the contract to opening night.

Besides designing for the theatre – your work has been seen with The Washington Ballet on film and TV. Which is your favorite medium to design for? 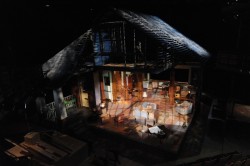 I have been doing a lot of comedy specials lately and they have been a fun challenge. It’s the medium of theater, translated through video. The camera sees things very differently and there has been a learning curve figuring out how to make the necessary adjustments.  Always nice to be thrown in the deep end now and then. That being said, I will always love theater. Nothing beats seeing a great story onstage and being part of it. 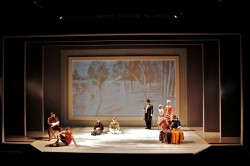 Design for 'Sunday in the Park With George' at Arden Theatre, in Philadelphia, PA.

What is the hardest venue you have had to design for?

My work on Cruise Ships has been the most challenging. Not many theaters I know of move during the show. Not to mention, being aware of Coast Guard regulations that affect the space along with things like ships power, changing staff and international shipping. Still pretty great to wake up in Venice, Barcelona, or Hawaii for work.

What’s coming up next for you?

Filming comedy specials for Louie Anderson and DL Hugely. Theater wise – Clybourne Park in Philadelphia, Necessary Sacrifices at Ford’s Theater, Alice in Wonderland for The Washington Ballet, The Religion Thing at Theater J, and two operas at University of Maryland.