Pride and Prejudice at Round House Theatre

Jane Austen’s Pride and Prejudice, adapted for the stage by Joseph Hanreddy and J. R. Sullivan, is on stage at Round House Theater in Bethesda, and is directed by Producing Artistic Director Blake Robison. Robison’s production brings more laughs and fun into Austen’s romance. And it’s an extravagant and gorgeous production filled with wonderful performances by a cast of fine actors, and has many laughs. 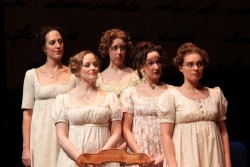 Michael Brusasco (Mr. Darcy) takes a different approach on Mr. Darcy’s character than typically stoic attitude his character presents in Austen’s novel. Here, after he falls in love Elizabeth, he becomes a nervous man, aiming to please Elizabeth openly. Darcy stutters in his speech and cannot seem to find his words during a conversation with Elizabeth when she visits his home with her aunt and uncle. This new characterization, shy and nervous Darcy, aims for comedy and laughter from the audience. Kate Cook (Elizabeth Bennet) portrays her character more faithfully to the novel, and refreshingly, Cook adds extra wit and sarcasm to sharpen Elizabeth. During Elizabeth’s tense talks with her semi-rival Caroline Bingsley (the wonderful Susan Lynskey), she is palpably polite and ironic.

The remaining Bennet family members: the kind and Job-like Mr. Bennet (Rick Foucheux), the flippant Lydia (Laura Rocklyn). her head always in a book Mary (Betsy Rosen), the strong-willed – ‘I must get them married’ Mrs. Bennet (Catherine Flye), the impulsive Kitty (Alice Gibson), and the kind and witty Jane (Heather Haney), are superbly cast, and hilariously funny, especially when these two different socio-economic class groups are put into the same room.

The script is entirely faithful to the novel, but this new comedic approach, at times, had many viewers hesitate to, or unexpectedly, laugh at parts of the story that have always been portrayed as serious, which may have made some viewers uncomfortable

Narelle Sissons’ set and backdrop are extravagant. In the center of the stage is a giant, wooden house, wind-up toy gracing a turnkey on one side. The house spins in between scenes, changing the side facing the audience, and behind each wall is a glimpse into different homes. The actors must perform in front of the wind-up house, closer to the audience. Inside, the furniture is quintessentially early nineteenth century England; they include more or less fancy lounging chairs and chandeliers, distinguishing each home by their wealth and class, appropriate to the novel and era. The backdrop is a projection of cursive handwriting on unlined yellow parchment, designed to compliment the time period being portrayed, and is intended to be either Austen’s or Elizabeth’s (Austen’s heroine). Costume Designer Frank Labovitz, Lighting Designer Kenton Yeager, Sound Designer Joe Payne, Wig Designer Heather Fleming, and Choreographer Ilona Kessell all contribute to the visual splendor and the fun of this elegant production.

Round House Theatre has taken much pride in bringing this new and visually beautiful production with a new comedic take – and forgive me for being so prejudiced – but this is a fine way of introducing your friends and family to the world of Jane Austen.

LINKS:
Read the synopsis and meet the many characters of Pride and Prejudice here and read the novel chapter-by-chapter online.

A video trailer of the production at The Utah Shakespeare Festival starring Michael Brusasco and Kate Cook in July and August 2010.

Here is the synopsis of that production which is similar to the Round House production.