The Commedia Pinocchio at The Fun Company at Maryland Ensemble Theatre

If the purpose of The Fun Company at the Maryland Ensemble Theatre is to create fun on stage then they got it right in their production of The Commedia Pinocchio. The talented cast turns this production – geared for younger audiences – into pure entertainment for the entire family. From the moment the show begins – the audiences sees that the entire ensemble is having a great time and it makes the experience even more enjoyable. 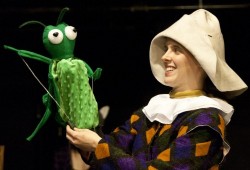 The Commedia Pinocchio is about the rag tag comedy troupe who puts on the familiar tale of Pinocchio, and writer Lane Riolsey adds more humor to her adaptation. Director Julie Herber allows her cast to become props like trees and donkeys, and also allows them to use a cart full of simple real props and make simple costume changes. The results draws many laughs from the audience

Caitlyn Joy and Vanessa Strickland play two roles that are usually played by males, and they are made for these roles! Caitlyn is comical as Columbine and she is simply adorable as Pinocchio. She brings an abundance of high energy and embraces the starring role. Her bending scene as Pinocchio alongside Geoffrey Huntoon had the audience roaring with laughter.

Vanessa Strickland (Arlequin) gets to use her skills as a puppeteer controlling the 100 year old cricket, and she shows that she has the energy to keep up with Caitlyn, which is no easy task. She’s a versatile actress as she demonstrates by changing into several roles – including a police officer, a fox, and a mischievous friend. There is a scene where she is playing with Pinocchio in Toyland and it’s is full tilt fun, where they eat giant lollipops and try to play tennis. When Vanessa eats a candy ball the audience roars with laughter. You have to see it to believe it!

Allison Lepelletier’s is an audience favorite throughout the play. She was happy no matter what role she was playing – be it a blind cat, a donkey, or a fairy. She also brings the best out of her fellow performers. My favorite scene is when Allison – playing the blind cat along side Vanessa as the fox – amuses the audience as they try to con Pinocchio.

Goeffrey Huntoon (Punchin) is comical in his role, and does a splendid job acting as Pinocchio’s puppeteer. His hat stomping scene with Reiner Prochaska (Pantalone) is a hoot. Reiner Prochaska is hysterical from the first moment he steps on the stage as Pantalone. He is humorous as a tree and draws many laughs when he plays a donkey.

Bring your kids! This amazing cast delivers the laughs in the Fun Company’s production of The Commedia Pinocchio. It’s a delightful show for the entire family.

The Commedia Pinocchio plays on Saturdays and Sundays through December 17, 2011 at The Fun Company at The Maryland Ensemble Theatre – 31 W. Patrick Street, in Frederick, MD. For tickets, call the box office (301) 694-4744, or order them online.