A Commedia Romeo and Juliet at Faction of Fools

Let us begin. Everyone knows the story of Romeo and Juliet. Even if you don’t think you know it, you have seen a movie or a show that is based on it and follows it almost point for point. But, just in case you don’t know it, here it is: Boy desperately loves girl, boy sees another girl, boy forgets about first girl. Girl swoons at attention given by capricious boy, falls in love, makes some strange decisions (she is 14, what do you expect). Families hate each other, speech, corpse, speech, corpse. Priest roofies girl, girl falls down like she’s dead. Boy sees girl dead, boy kills himself. Girl wakes, girl sees boy dead, girl kills herself. Both fathers stand over corpses of their children and listen to the roofie purveying priest tell them how it was all his fault. Or something like that. It’s by this guy Shakespeare. 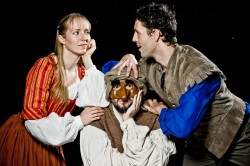 Of course, there is more to it than that. And, of course I say this with tongue-in-cheek. The story is easily one of the best love stories ever written and one of the best tragedies also. It is moving and sweet and lonely and inspiring. And somehow Faction of Fools managed to finally bring life back to a script that has been languishing in the hands of over-actors for hundreds of years.

Faction of Fools has reminded us time and again that people of the past were not all staid and stolid prudes. They were boisterous and obnoxious, just like us. They had fun. And theater was the popular media of the day. So it was fun to see. They bring this insight to a stunning retelling of the Bard’s lyrical romance.

There is much to say, so let’s organize it by category:

Sets: Ingenious is the word. A large trunk is wheeled onto the stage. Minimal? Yes. Until the trunk’s lid is pulled off (with a little effort and a few cries for help to the offstage players) to discover a dozen smaller boxes make up the larger trunk. And it’s on casters so it rolls around the stage. As the play progresses the cast (of 5, mind you, who would improv hilarious scenes if there was ever an issue with a set change [of which there were a couple]) rearranges the boxes to create unique sets and move them as the action changes. And adding to this elegant arrangement are the props that magically appear out of the boxes (which are hollow). I am amazed at how they knew which boxes went where and what was in them. As I said: Daniel Flint is ingenious. 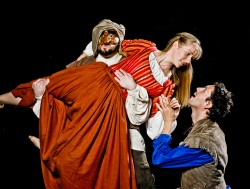 The Show: Delightful. Taking a comedic stance with a tragedy can be very tricky. Faction pulled me through emotional acrobatics that I was unaware I was capable of. They created comedy where I had never seen it in R & J. And with that comedy bloomed a sincerity I can scarcely credit. Most renditions of this show forget that there are comedic characters like the Nurse and Paris (Toby Mulford) or the down-to-earth priest (Eva Wilhelm). So the actors playing these characters take them far too seriously. We forget that tragedy doesn’t exist in a world devoid of comedy. And, in fact, the comedy enhances the tragic ending.

Eva Wilhelm and Paul Reisman provide a superlative base for the show.Their facility with the language of Shakespeare allows them to transcend the words and engage the audience on a visceral level. Wilhelm’s Lady Capulet speaks with her daughter (and the audience) with a clarity that strikes at the heart of the speech, instead of wallowing in every vowel as so many tend to. Reisman, similarly, plays the action. His death as Mercutio is unparallelled in my experience. It is shocking and truly tragic. And at the moment of death, his revelation is heartbreaking.

Toby Mulford is at his best when he creates characters that defy, not just convention, but any and all rules of modern theater. He plays a woman, a prince, and a couple of manservants and each is distinct and hilarious in its own right. One of the highlights of the evening is watching Paris simper across the stage in a display of arrogance not seen outside the walls of the royal court in centuries.

And we come to the heroes of the piece. Drew Kopas plays Romeo in addition to Abraham and Montague. Drew’s ability to maintain focus while insanity is happening around him allowed us to continue our journeys with his character instead of focusing on the set changes that were swirling around him. Juliet (Gwen Grastorf) was played with a lightness that befitted a young teen. The decisions were rash and impulsive. The misgivings were brief and washed away in the tide of hormones following the first kiss (and the kisses became more passionate as the show progressed). And in a show where the final scene is filled with people throwing corpses at one another as the play is recapped she and Drew still leave you bereft at the end as they re-enact their entire relationship in 10 seconds leaving them lying on the cold stone bier.

The show is magnificent, so I say this with no hesitation: You will laugh. You will cry. It’s better than Cats. Run, don’t walk to see this show! I did.

A Commedia Romeo and Juliet plays through February 4, 2012, at The Mead Theater Lab at Flashpoint – 916 G St NW, in Washington, DC. Tickets are $25, and can be purchased here.