There are only a few places where there is no ringing. The theatre. Churches. And the toilet. But not in Silver Spring Stage’s production of Dead Man’s Cell Phone where the phone is ringing non-stop. A surreal world that presents the notion of a man told through inadvertent lies of those around him, playwright Sarah Ruhl brings a vibrant and unique work to the stage. Jean (Alyssa Sanders) takes on the task of informing Gordon’s (Andrew Greenleaf) loved ones that he is no longer with them, and with each encounter the tall tales grow a little taller in this strangely comedic play. Directed by Jacy D’Aiutolo the shows is dreamlike – a world slightly removed from our own but still connected in a loose but relatable way. 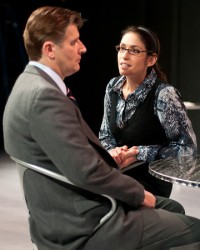 D’Aiutolo takes a bold risk in employing ballet dancers throughout the show to shift the scenes. As each scene comes to its natural end the stage is bathed in a fuchsia flush while four dancers (Lizzie Albert, Amanda Shafer Berman, Maya Davis, and Heather Dixon) float onto the stage to eerily peaceful music. The move props on and offstage but the most unique thing about them is the way they move the actors. Standing in front of the actors they draw their hands before their faces and guide them to their new locations almost like puppet masters tugging invisible strings of their puppets. While these moments are picturesque and very tranquil – you almost become too caught up in their ethereal nature, detached from what previously happened on stage and what is about to happen, and this created a disconnect that might have been avoided had a different approach been taken. We see the dancers again at the end of act I and toward the end of the show used this time as actual dancers. But again the dance at the end of act I seems disjointed from what’s happening on stage.

The stage itself is little more than non-descript walls and a few needed furnishings to establish the setting; chairs, a table, etc. But hats off to Set Designer Ken Ambrose for his clever sliding door platform at the back of the stage. Two walls slide apart like a hidden compartment to reveal a stained glass window, a wall with many drawers, even an airport directional guide sign throughout the show. This simple set piece transforms the settings giving the actors a sense of new locations without needing excess props or furniture. And a well-deserved nod must go to Costumer Crystal Fergusson as she paints clear defining images of the characters by some of the outfits she assembles for them. The two most stunning pieces in the show come from the bright green well-fit dress of The Other Woman (Ana Maria Mutchler.) It isn’t red like you would expect but it creates the sassy nature intended for the character. And when Mrs. Gottlieb (Sarah Holt) first appears on the stage she creates a stunning image posed against the background of the stained glass window in a full length burgundy purplish fur coat and matching hat. 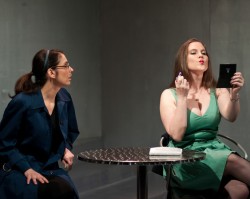 With a cast of quirky characters there is a little something for everyone to relate to in this show. It is incredibly well cast and acted with varying levels of dynamic growth. Gordon (Andrew Greenleaf) has perhaps the most difficult role of all as he plays a very stiff character and spends most of his time being dead. But Greenleaf maintains an interesting character during the opening of act ii, having a monologue that is essentially addressed to the audience. He executes this time wisely, using a range of vocal volumes and physical expressions to tell his story rather than having the traditional build of a story unfolding. He jumps in exciting or angry moments but backs down to a more subdued tone during moments that are duller or more sentimental. And although the only person he ever interacts with is Jean (Alyssa Sanders) his vivid descriptions of his wife Hermia (Erin Gallalee) paint such a strong image that it is as if she is right there on stage beside him.

The scene stealer, however, is Mrs. Gottlieb (Sarah Holt). From the moment she appears you can tell there is just something slightly off about her. She too plays a vocal range of emotions that will keep audiences on their seats as they follow her through ridiculous moments. Holt, as Gordon’s mother, has mannerisms indicative of a motherly woman who isn’t so motherly, more akin to a mother-in-law that we all love to hate. Her awkward phrasing and gesturing, especially involving Jean is laughable and maintains a grounded sense of quirkiness. Holt hits volcanic outbursts, especially during the scene in the church where she begins shouting obscenities in regards to a ringing cell phone, after having previously been calm, and once more returns to that peaceful state as if the outburst never happened. She’s almost robotic at moments in a The Stepford Wives sort of way that really keeps her character interesting; a true delight to watch. 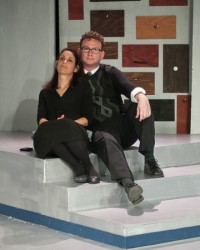 Jean (Alyssa Sanders) is the narrator of Gordon’s life essentially going around and encountering each of the people previously involved in his life. And she, like Holt as Mrs. Gottlieb, when first appearing on stage defines her character from the very beginning. A meek and mild youthful woman who is almost uncomfortable in her own skin is created through Sanders choices of physicality. Sanders creates a little shell for Jean to stay within, having a slightly awkward posture and very worrisome facial expressions. She is well grounded in her character’s own little world, but not so absorbed in the lunacy of it that we lose sight of her during the production. Her interactions with Dwight (Scott Sherven) show us the growth of the character as she meets him and his involvement molds a shift in her. There is a distinctive growth and change that Sanders portrays for the character, subtleties like wearing glasses in the first act and not in the second; or taking more bold approaches to the possession of the cell phone as the play progresses. She is a talented delight and gives the story a life with all of her various interactions among the others; a performance not to be missed.

Remember, you will never walk alone because you’ll always have a machine in your pocket that could ring at any time, but please silence it before coming to the Silver Spring Stage to see Dead Man’s Cell Phone.

Running Time: Two hours and 10 minutes with one intermission.