Will you take me to the prom? Or if you won’t take me – at least take me to Single Carrot Theatre’s production of MilkMilkLemonade. A new work for the stage by playwright Joshua Conkel, MilkMilkLemonade is an incredible journey of self-discovery for an eleven year old boy named Emory. Growing up on his Nanna’s chicken farm Emory is faced with many discoveries at his young age. Who is he? And who does he want to be?  If liking girl stuff and wanting to do what girls do –  is that wrong? In this challenging and heart-warming tale of self-identification you’ll meet a small group of actors who push the audience to discover their own identity through the work as it unfolds on the stage. 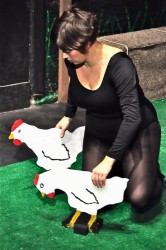 You arrive on Nanna’s farm, a simple space transformed with subtle choices made by set designer Nathan Fulton. Fake poolside green on the floor to create the idea of chickens grazing in the field, and the outer framework of a barn on the upper level are all that’s really needed to breathe an atmosphere into this production. The costumes are simple, every day clothes on the farm, except for the brilliant naked suits adapted to Emory and Elliot and the lavish chicken costume for Emory’s best friend Linda. Working with costume design students at Maryland Institute College of Art and designer Melanie Lester, Director Nathan A. Cooper presents his vision for this enormous chicken and they made it happen. A huge suit of feathers, in the right blends of white and yellow, with a fancy ruff of more feathers, done in turkey shades of red, orange, even brown; this and bright yellow stockings and chicken feet slip-ons create the ensemble for Linda (Jessica Garrett). But no chicken costume would be complete without a head, which rests atop Garrett’s head like a headdress. It’s brilliant and quite imaginative, but has to be seen to be believed.

As the director, Nathan A. Cooper works incredibly hard to create the concept of people and the discovery of identity in this production. Cooper takes the stereotype of gender out of the equation and does a rather unique interpretation of treating gender much like a costume – a layer that the actors can add to their character. He makes a bold choice in cross-gender casting both the roles of Nanna (Elliot Rauh) and Elliot (Giti Jabaily) who is the bully that Emory (Aldo Pantoja) plays with in the barn. Together Cooper and the cast take identity to new heights with their connections to these characters, by learning the roles that their characters play, be it a gender role, a relationship role, or some other label; all while maintaining the honesty and integrity of self-identification. The audience may look at Rauh and see a male actor, but as Nanna, you see the characteristics of a cantankerous old grandmother shining through; the nagging at her grandson, the stubborn attitude, being set in her ways— all indicative of an older grandparent without needing to adapt the typical affectations of gender. It is a brilliant thing to watch unfold.

And the actors themselves bring to the show even further depth – delving into self-discovery and finding new ways to relate to the characters they portray. Linda (Jessica Garrett) is a giant talking chicken, who is Emory’s best friend on the farm. From watching her movement on the stage you would never know that Garrett was a girl in a chicken suit— her nervous energy is exerted through her whole being, twitching and shifting uneasily across the stage as one would expect a chicken to move around the barnyard. There is a profound moment of interpretive dance choreographed by Sarah Anne Austin, during Linda’s moments inside “The Machine” which heightens the imagination of Emory and projects it to the audience via a bizarre but beautiful combination of bodies swinging, arms swaying, and people moving with the rhythm of the music. More of Austin’s interpretive choreography can be seen during the “Boneless Skinless Chicken” dance – a true delight in regards to free-range motion of both Elliot (Giti Jabaily) and Emory (Aldo Pantoja.) 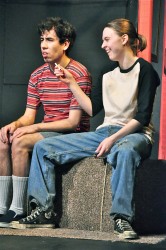 The character that takes on perhaps the most complex role of the evening is Genevieve De Mahy, playing Lady in a Leotard. She voices Linda for most of the show, as well as moves props, becomes the other farm chickens, giving them movement and sound, becomes the nasty spider beneath the porch (which has a beautiful full-body puppet attachment across her back) and even sings a “Final Performance” Ballad as Emory’s doll, Starlene. This in itself is another beautiful moment with Austin’s choreography worked in. The scene is picturesque, straight from a fever dream – Nanna (Elliot Rauh) has dropped the doll in the rubbish bin and set it ablaze. Emory (Aldo Pantoja) and Elliot (Giti Jabaily) are shimmy-shaking the ‘Boneless Skinless Chicken” dance. Linda (Jessica Garrett) is running circles around the barn while Genevieve De Mahy, in a wig as Starlene (the doll) is crooning her goodbye song to the world. A camera to this moment would not do it justice.

We find opposite portrayals in Emory and Elliot. Both are young boys in rural America, confused in regards to their roles in life, especially their gender roles. Elliot (Giti Jabaily) takes the bully approach. He cannot properly express his feelings so he punches people, lights fires, mercilessly teases Emory. Jabaily is grounded in this characters mentality, a true childhood meanie who is lost in his own self discovery. You see through her to the troubled boy on stage and almost fall in love with him despite the way he acts toward others. Her angry facial expressions tell of deep emotional anguish within the character and Jabaily connects to Elliot in such a way as to make the audience understand his struggles. 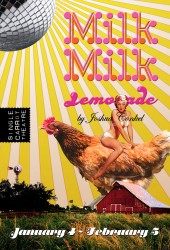 Emory (Aldo Pantoja) gives us similar connectivity but in a much different portrayal. Pantoja is true to the youthful nature of Emory, each discovery made with wide unbelieving eyes; but his childlike innocence is not muddled with naiveté. Pantoja knows his character’s confusion and presents it with a sense of hope and dignity rather than emotional outbursts. He is particularly expressive during the Ribbon Stick Dancing moment, where he allows the character’s inner passion to shine through his dance and bright hopeful facial expressions. Pantoja and Jabaily work incredibly well together to create a burgeoning sense of physical, emotional, and sexual tension bubbling under the surface between these two characters. It seems like bullying and hatred on the outside but as the stories unfold these actors peel back layer after layer of these young boys to create a beautiful chemistry on the stage.

The play in motion is sheer genius – defying gender boundaries and creating new expectations for self-discovery. It is an amazing production not to be missed. So be sure to get to Single Carrot Theatre for their thought-provoking production of MilkMilkLemonade.