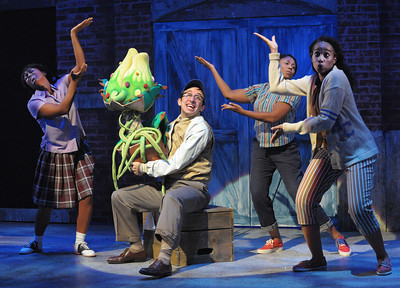 Should you purchase a house plant that resembles something between a Venus flytrap and an avocado, be wary.  And if it asks to be fed, that should definitely send up a red flag.  Because this isn’t your garden variety house plant; it could be an alien from another planet sent here to take over the world by feasting on human blood and possessing incredible powers over earthlings.

That is the premise behind Little Shop of Horrors—a comedy horror rock musical by composer Alan Menken and writer Howard Ashman based on the low-budget 1960 B-movie horror of the same title.   Not to be too hyperbolic, but the Olney Theatre Center’s production of this gem, under the superb direction of Mark Waldrop, is as close to perfection as it can be. 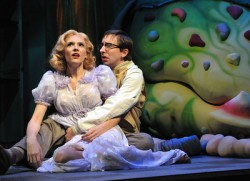 Carolyn Agan as Audrey and James Gardiner as Seymour. Photo by Stan Barouh.

The story centers on a poor, nerdy orphaned flower shop clerk named Seymour (played brilliantly by James Gardiner) who discovers this little exotic plant whose species he cannot identify in his books. Seymour observes that his plant, which somehow appeared following a solar eclipse, is sickly.  But a prick from a rose thorn causes some blood to appear on Seymour’s finger.  Immediately, the plant opens its pod.  From this point on, Seymour is well aware that for the plant to survive it needs blood—only the human variety will suffice.

The run-down shop, located on Skid Row in an urban area, is about to go under because “nobody on Skid Row buys flowers.”  The frustrated cranky owner, Mr. Mushnik, who could have been Tevye from Fidler on the Roof based on his assortment of Yiddish expressions (played to the hilt by Ethan Watermeier), is persuaded to keep the shop open when it appears that this mysterious plant is attracting customers to the shop.

Meanwhile, Seymour has a crush on his adorable blonde co-worker Audrey (played splendidly by Carolyn Agan) whose boyfriend, Orin (Bobby Smith) happens to be a cruel motorcycle dentist who physically abuses her, much to the chagrin of Mushnik and Seymour.  (Orin chose dentistry because his mother noticed his sadistic nature at a young age and thought administering pain would be a good career path.)  Seymour’s secret love for Audrey is such that he named the plant Audrey II in her honor.

This is where the fun (and horror) begins, as well as an examination into human nature.  People disappear as Audrey II grows and Seymour accumulates the things in life he had been missing: fame, fortune, love, and even a new parent!  He is tormented by the ethical and legal quandary—is it all worth it if it means people get swallowed up by the ever-growing Audrey II?

Alan Menken’s music in Little Shop of Horrors has a rock-soul 60’s vibe.  During the production, three street urchins, who also comment on the action, deliver tuneful transition numbers and outstanding background for the leads.  Their names are Chiffon (played by Kara-Tameika Watkins), Crystal (Shaunte Tabb), and Ronnette (Leayne C. Freeman).  Had there been a fourth, I’m sure Marvelette would have been considered.

Howard Ashman’s lyrics from the songs are clever and playful with several being hilarious.  Outstanding numbers were “Skid Row” that was performed by the company; “Somewhere That’s Green” and “Suppertime” performed by the company; and the best of all, “Suddenly Seymour,” where Agan and Gardiner, featured as Audrey and Seymour, discover their love for one another.  Their voices melded perfectly, and the audience reacted with a rousing ovation. The songs were ably backed up by conductor Ross Scott Rawlings’ fine orchestra.

James Gardiner returned to Olney following his appearance in You’re A Good Man Charlie Brown and has played in a multitude of DC-area theaters.  He is scintillating in this production.  Perfectly casted for the role of the nerdy but conflicted Seymour, Gardiner put on an amazingly polished five-star performance demonstrating well-tuned acting skills, energetic movements and stellar vocal talent.

Carolyn Agan as Audrey possesses a voice like a bell—crystal clear, pitch perfect and utterly beautiful.  Her chemistry with Gardiner is outstanding.
Ethan Watermeier was also flawless in his role as Mushnik.  A great instinct for comedy, Watermeier also displays his fine baritone voice in such numbers as “Closed for Renovation” and one of my favorites, “Mushnik and Sons.” 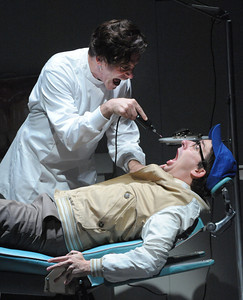 Bobby Smith as Orin and James Gardiner as Seymour. Photo by Stan Barouh.

Then there is veteran actor Bobby Smith with a bushel of theatrical accolades in tow, including nine Helen Hayes nominations.  He seems to relish playing Orin the psycho-dentist and Audrey’s boyfriend, so much so that Smith was assigned several other fun roles in this production.  It enables him to showcase his versatility and comedic skills.

Stephawn Stephens as the voice of Audrey II is spot-on portraying the demanding, blood-thirsty carnivore. And the puppets representing Audrey II’s ever-increasing size and prominence are handled superbly by puppeteers Eric Brooks and Elliott Davis.

The staging of Little Shop of Horrors  is also wonderful.  Scenery, designed by James Fouchard to ingeniously convey the characteristics of Skid Row, move in and out seamlessly to denote scene changes alternately representing the flower shop and the street along Skid Row.  The lighting (Charlie Morrison) and sound (Jeffrey Dorfman) are appropriately maneuvered to contribute to the eeriness that plays out amidst the comedic components of the show.

This production with its sterling cast and expert direction is a must-see show and perfect for the remaining days of summer and plant-growing season.