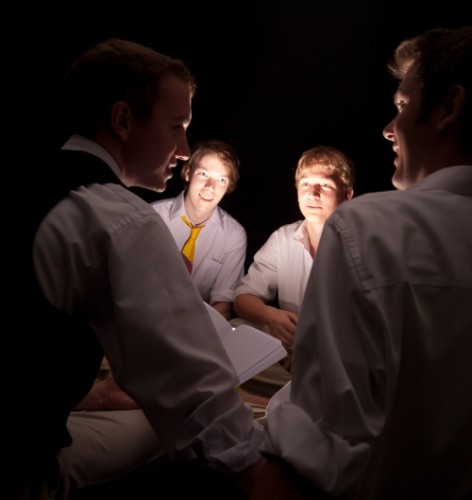 “Love goes toward love,” as Romeo says, “like schoolboys from their books,” and this is probably the inspiration for Joe Calarco’s unusual and rather avant-garde interpretation of Shakespeare’s most popular romance. Shakespeare’s R&J, performed by the Dignity Players in Annapolis, is like a cross between Romeo and Juliet and The Dead Poet’s Society—young teenaged boys at a 1960s prep school learn about love and lust and tragedy by taking on the lives of the star-crossed lovers of Verona and their warring families.

It’s a minimalist play, but that goes very much to its credit, for the story is about boys imagining the escapades of 14th-century Italians. The set consists predominantly of a few black boxes and a black bench, the sole prop a red scarf that doubles as a blanket, a dagger, a vial of poison, a ring, and a dress. The first bout between Tybalt (Sammy Stagg) and Benvolio (Eric Schaum) is essentially a tug of war. The four boys (Stagg, Schaum, Will Poxon, and Marty Thompson) cavort barefoot around the stage in their khakis and white button-down shirts, forgetting their primness in the lewd savagery of Shakespeare’s words. The spectacle is not necessarily a visual one, but this play is painstakingly choreographed, the movements precise and almost unnoticed in the wake of the pure emotion emanating from the stage. 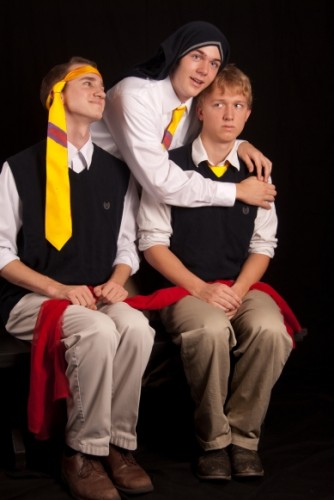 Will Poxon as Lady Capulet, Sammy Stagg as the Nurse, and Eric Schaum as Juliet. Photo Courtesy of Dignity Players.

Director Edd Miller has captured Romeo and Juliet at its very essence, playing on the revels of youth and the urgency of young love and tempering it with humanity. These characters feel real, whether as adolescents playacting in a hidden corner of some old prep school or as figures in a Renaissance legend. Miller is aided of course by some truly phenomenal acting.

Shakespeare is difficult to perform with a cast of a dozen, let alone with just four young men each playing several parts. Schaum’s unerring sweetness as Juliet, combined with Thompson’s turn as an awkward, eager Romeo, make their characters’ untimely end hit the perfect note of tragedy. Whatever reservations the homosexual subtext may have incurred (particular among 1960s boarding school boys) is lost in the story of their love. Poxon’s rendition of Queen Mab’s Dream was utterly delightful, Mercutio lost in fantasy and obsessed with his own words, while Stagg’s portrayal of Juliet’s nurse, complete with his vest over his head like a wimple, is consistently hilarious—a bright spot in a play that gets very sad very quickly.

This play has my absolute endorsement. It’s a phenomenal rendition of Romeo and Juliet, coupled with a context that brings a whole new light to a very old story, and as emotionally gripping as anything I’ve ever seen.

Running Time: 2 hours and twenty-five minutes with a ten-minute intermission.

Shakespeare’s R&J, by the Dignity Players, is currently playing at The Unitarian Universalist Church of Annapolis, 333 Dubois Road, Annapolis, MD through August 11.   For tickets order online.