Theatre Review: ‘The King and I’ at Wolf Trap 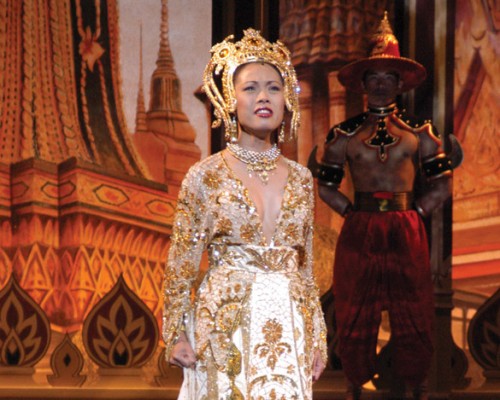 Rodgers & Hammerstein’s The King and I has been enchanting audiences for over 60 years, opening on Broadway March 29, 1951, starring Gertrude Lawrence as Anna and Yul Brynner as the King.

Wolf Trap is currently presenting this classic produced by Theater of the Stars, based out of Atlanta, Georgia. 2012 introduces a “Season of New Beginnings” for Theater of the Stars which, incidentally is celebrating 60 seasons of “Star Studded Summer Shows.”

Set in 1862 Siam, the King has summoned an English school teacher named Anna to serve as the tutor to his many children and wives.  In the process of teaching, Anna also learns about the people of Siam (“Getting to Know You”). But the person who seems the most hungry for knowledge is the King who finds life “A Puzzlement.”

Under the helm of Asian-American Director Baayork Lee, she has given an authentic look and feel of Siam, with its ethnic casting, enormous statues, and grand orchestra.

It is interesting to note that Baayork Lee created the role of Connie in A Chorus Line where she also served as Michael Bennett’s assistant choreographer.  What is more, she made her professional stage debut in the original Broadway production of The King and I at age 5 as Princess Ying Yawolak!

Susan Kikuchi’s choreography is authentic and entertaining.  She too has ties to the original Broadway production.  Her mother, Yuriko performed on Broadway in the first performances of The King and I and was also Jerome Robbins’ assistant.

The theatre community is indeed very small, with actors wearing many hats.  In 2000, Baayork Lee was nominated for a Helen Hayes award for Outstanding Choreography for Animal Crackers at Arena Stage, while, in the same year, Ronobir Lahiri, who plays the King of Siam, won a Helen Hayes for Outstanding Sound Design for Indian Ink at Studio Theatre.

This production also has local ties since several DC area children are in this weekend’s  performances at Wolf Trap, earning roles in the youth ensemble through auditions at Wolf Trap last month.

Longtime actress, Victoria Mallory (Anna) uses her experience to deliver beautiful and lyrical interpretations of such classics as “Hello, Young Lovers” and “Getting to Know You.”

Ronobir Lahiri (King) has a nice voice as well, but his real strong-suit is his comedic delivery of one-liners, like “When one does not know what to say, it is time to be silent.” Though he has a full head of hair, unlike the originator of the role, Yul Brynner, Ronobir does look and act the part.

Together, Victoria and Ronobir make a great pair.  Not in a romantic sense, but more of a mother-son relationship.  Ronobir as the King is young, virile, and spoiled, while Victoria as Anna serves as the wise, matronly teacher to the Kings children and to the King himself.

Ali Ewoldt as Tuptim, the slave who is brought from Burma to be one of the King’s junior wives, received the loudest applause from the audience after she sang her stirring, operatic interpretation of “My Lord and Master.”  Her love interest, Lun Tha, played by Josh Dela Cruz is no slouch either, singing a text-book example of “We Kiss in a Shadow.”

The highlight of the evening is in Act II. In one of the most thrilling moments in musical theatre history, “Shall We Dance” gets the audience clapping with excitement after Anna has taught the King the polka, dancing majestically together across the stage.

Running Time: 2 hours and 40 minutes including one intermission.

Theater of the Stars’ The King and I plays through September 2nd, 2012 at The Filene Center at Wolf Trap National Park for the Performing Arts which is located at 1551 Trap Road, Vienna, Virginia 22182. Tickets can be ordered online or by calling Tickets.com at 877-965-3872.