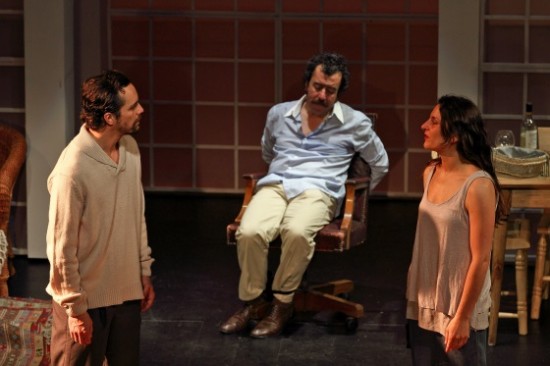 Ariel Dorfman’s powerful La Muerte y La Doncella (Death and the Maiden), now playing at the Kennedy Center’s Family Theatre as part of their 2014 International Theatre Festival, tells the story of one woman’s vigilante justice, the abduction and trial of the government doctor who years earlier tortured and raped her.

Yet, the story, set in an unnamed country only recently released from the grip of a brutal dictatorship, is not simply her story.  Rather, her story is a nation’s story.  Her story is the story of Chile in the years following the end of the dictatorship of General Pinochet.

What makes ‘Death and the Maiden’ powerful is the bold audacity of its truth.

Directed by Moira Miller, this Death and the Maiden exudes its larger purpose.  In her director’s notes, Miller recalls her first reading of Dorfman’s great play.  She discusses her four year mission to bring the play’s story about the need for justice to the Chilean stage. 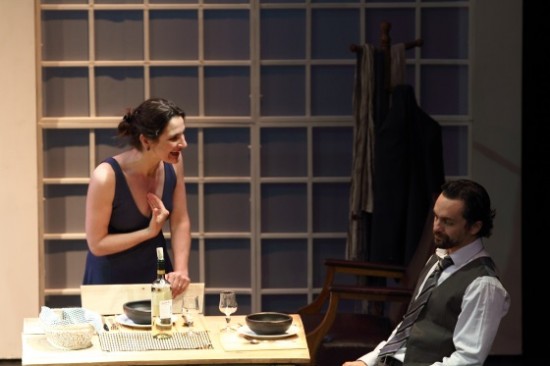 In Chile, when General Pinochet died in his mansion, his crimes against the Chilean people following the overthrow of Salvador Allende were left unacknowledged, unaccounted for, and unpunished.  As any single victim of violence knows, without justice the psychological wounds only fester and destroy.

Driving Miller’s mission to put the play on stage in Chile was her desire to use the theatre as an arena for healing.

Death and the Maiden allows its one victim–a young, attractive, former medical student–to confront her violator and force him to confess.  Her act of vigilante justice became for the Chilean audience a conduit for all the silenced victims of Pinochet.  A catharsis followed.

Antonia Zegars plays Paulina Salas with a searing simplicity of conviction.  At the time of Pinochet’s takeover of the government, Paulina is involved with a progressive lawyer, Gerardo Escobar, played beautifully by César Sepúlveda.

Pinochet’s henchmen abduct Paulina, who is a passionate critic of the dictator, and take her to a remote location where they torture and rape her, initially in an attempt to get her to divulge her boyfriend’s whereabouts.  She never surrenders; thus, her boyfriend Gerardo survives.

Doctor Miranda, played with a fierce combination of machismo and vulnerability by Erto Pantoja, is employed by the government to assist in the torture, evaluating the “patient’s” stamina and endurance.  In this case, the doctor finds the opportunity to take advantage of his “patient” too tempting: his torture and rapes occurs over days while Shubert’s quartet, ”Death and the Maiden,” plays on the tape deck.

The play opens in the years after the return of democracy and the establishment of a pseudo-Commission of Reconciliation.  No names will be named, and only crimes involving death will be investigated.

Gerardo has just been named to the democratically elected president’s Commission for Reconciliation.  On his return home, he has a flat tire but has no jack in his car (his wife has loaned it to her mother).  An older man, Doctor Miranda, gives him a lift.  Grateful, Gerardo invites the doctor to return later for dinner.

The doctor discovers that Gerardo has been named to the Commission; he returns later that night to “congratulate” him.

Paulina, in her night gown, hears and recognizes the doctor’s voice from years before (she had been blindfolded during her long ordeal and can only remember his voice and smell.).  Filled with primal vengeance, she captures the doctor, ties him to a chair, and puts him on trial.

Ariel Dorfman had worked in Salvador Allende’s government as a cultural adviser; he was forced into exile when Pinochet came to power, not returning to his country until Pinochet’s ouster in 1990.

Death and the Maiden is steeped in Dorfman’s intimacy with violence and torture and the need for retribution and vengeance: a need that is, unfortunately, all the more true today than it was over 20 years ago, as abuses of power run rampant over human rights throughout the world.

American audiences might not be able to feel that sense of national catharsis that Chilean audiences felt watching Death and the Maiden; but we should know what it is like for a loved one to walk the streets of America and see her or his violator happy and unrepentant, or for groups of Americans betrayed by the nation, to seek justice and find nothing but silence.

Death and the Maiden offers no easy answers to these victims of power, but it does offer a platform for their need for justice to be expressed.  And that, after all, is what the theatre can and should offer.

Death and the Maiden plays at the Kennedy Center, 2700 F Street, Washington, DC through March 16.  For tickets and info click here.