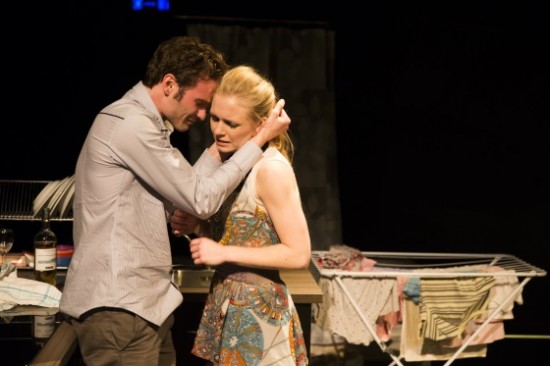 The National Theatre of Iceland produces roughly 30 shows a year.  Of those 30, about 10 are new plays. One of those new plays, Harmsaga, by Icelander Mikael Torfason, has come to Washington as part of the Kennedy Center’s International Theatre Festival.

A riveting, psychological exploration of a tortured marriage, Harmsaga depicts the lives of Ragnar and Sigrún—played with heat and conviction by Snorri Engilbertsson and Elma Stephanía Agústsdórtir—from the romantic beginnings of their teenage relationship, through the early years of their stressed marriage with children, to the final days of their emotionally crippled love affair.

For a Washington audience, the production offers that rare glimpse into a destructive, violent world, intimate and private, and usually only revealed in the aftermath by headlines declaring restraining orders and murder-suicides.

Torfason’s approach to their relationship, however, is what makes Harmsaga, so especially interesting.  His plot eschews traditional linear development, and his perspective contains an eerie balance that challenges the audience to understand the destruction taking place on stage as a dynamic dance between two potentially wonderful people caught in an emotional whirlpool from which they are unable to extricate themselves. 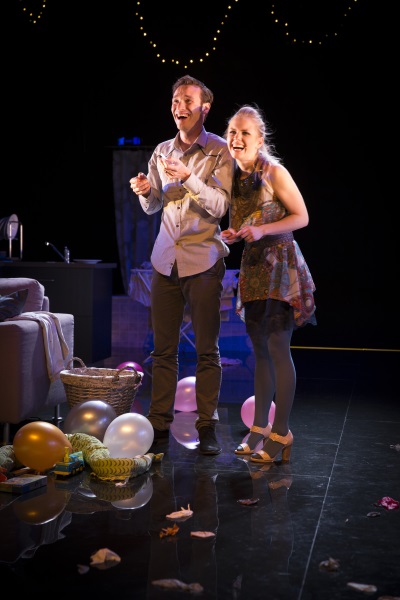 Harmsaga gives us a plot that mirrors the psychological extremes of Ragnar and Sigrún’s life together.  In one scene they are proclaiming their love for one another on the club floor, in the next Ragnar is pounding his head with his hand declaring his wife “a wh**e” and miserable mother; only to then follow that scene with an albeit strained effort to patch up their damaged marriage.

This combination of balanced perspective and non-linear plotting allows the audience to experience viscerally the near schizoid nature of their passionate relationship without making a judgment.  Afterwards, as folks return home, they may argue about blame and guilt—and there is plenty to throw around—but in the midst of disintegration, one may foresee a tragic ending but one will feel powerless to prevent it.

Snorri Engilbertsson’s Ragnar is all youth and confusion.  He fully submerges himself within his tortured character, and the behavior that erupts from that well-spring of psychological turmoil is both beautiful and horrifying.  Anyone who has worked with young people, or who remembers his own youthful mental breakdowns, will recognize far too well Ragnar’s dilemma.

On the other hand, Elma Stephanía Agústsdórtir embodies the teenage Mom, and her Sigrún gives proof to the dangers that await young women who become lovers, mothers, wives, and career women too soon.  We watch as the stress of that quadrangle tears her beautiful soul apart.

When on stage interacting, Engilbertsson and Agústsdórtir exude chemistry, flashing back and forth between heat and ice.

Director Una Thorleifsdórtir handles the mania of the story like a master, using a combination of sound effects, light shifts, static imagery, and tableaus to signal the plot’s changes in direction.

Her production team has also done a fabulous job.  Sound designer Kristinn Gauti Einarsson has constructed an eerie score to accompany the action, which operates at a subconscious level.  Eva Signý Berger designed a set that marvelously switches from apartment to club in an instant; her costumes were simple and allowed the actors’ athleticism to shine.  Lights by Magnús Arnar Sigurdarson play a crucial role in both clarifying the action of the script and in illuminating the emotional rollercoaster this doomed marriage is riding.

The National Theatre of Iceland’s production of Harmsaga will definitely leave its mark on an audience, as its tale dares us to witness the demise of a teenage marriage.

A riveting, psychological exploration of a tortured marriage…

Without signaling some specific reason or loading their relationship down with addiction or mental defect or moral decay, the production offers two seemingly “normal” young people, with so much hope and potential for happiness, caught in a psychological spiral, exacerbated by their lack of resources and their youthful naiveté but not caused by that lack of money or wisdom.

Might a change of scenery change their fate: Sigrún ponders.  Might additional government programs alleviate the stress and weaken the cyclone?  The play’s taut drama leaves such questions as so much wishful thinking.

One leaves the theatre sure of only one thing: the intimacy of their danger requires an equally intimate solution.