Theatre Review: ‘Orlando’ by WSC Avant Bard at Theatre on the Run 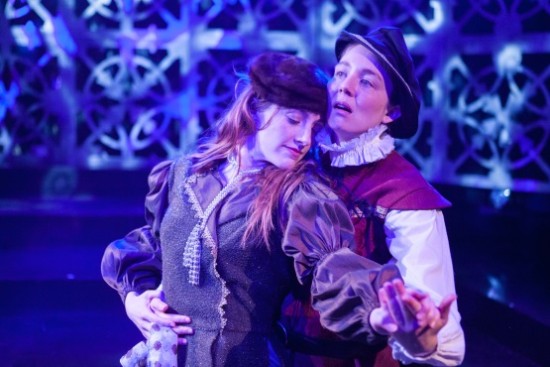 There are at least three reasons you should venture out to see WSC Avant Bard’s new show, Orlando , now playing at Theatre On The Run.

First of all, great literature never fails to illuminate life even as it transforms it, and Virginia Woolf’s Orlando , a beautiful narrative meditation on life, art, and–I daresay–soul is great literature.  Ms. Woolf, one of the greatest writers of the 20th century, deserves her time on stage before a wider public, and this sometimes raucous aggregation of gender identifications and time travel is the perfect vehicle for such public consumption.

Secondly, Sarah Ruhl’s adaptation of Woolf’s prose uses for the most part Woolf’s prose, which means that the theatrical production is not theatre as such but prose-in-performance, with the descriptive narrative text left in place to detail the subjective essence of the action as it unfolds.  That stylistic flourish, though not necessarily for those without a love for prose, sweeps through the ear like a symphony and is joyous to hear.

Thirdly, Avant’s production of Ruhl’s text is first rate–clean, imaginative, funny, and with several outstanding performances.  If the slap-stick of the first act does not always jive, tonally or intellectually, with the serious humor of the second, I’ll leave that for Woolf, Ruhl, and Avant to hashout, because this Orlando rocks with rich humor, insightful psychic nuance, and magnificent ensemble play, and that is more than worth the price of admission. 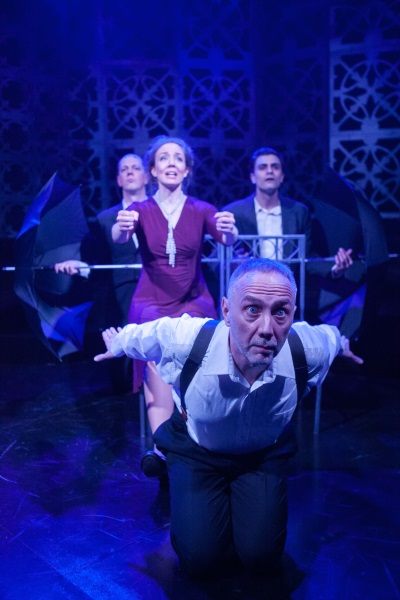 Covering 400 plus years of gender-romance-role evolution, Orlando opens in Shakespeare’s England.  Queen Elizabeth takes a fancy to a young teenage boy-poet, whom she puts to work, so to speak, fulfilling her queenly desires.  In return, Orlando receives an estate with royal status.

Orlando, played with boyish charm by the multi-talented Sarah Barker, is like a puppy in a butcher shop.  As he satisfies the Queen’s taste for youth, Orlando soon finds himself the youthful tidbit of other court ladies.  Ms. Barker, however, not only introduces us to the boyish poet, she takes us with haunting eyes and a skilled actor’s touch on an enchanted journey through the eternal artistic psyche that is Orlando.

It is not until Orlando meets the mysterious Russian Sasha, played with a stylized, mysterious grace by Amanda Forstrom, that his sexual relations transform from an obligatory service to the Queen and her court to the delightful twitters of the love-sick male at the feet of his soul-mate.

His Russian Princess, however, turns out to be both less than she seemed to be and more than he ever imagined.  Heartbroken when Sasha meets a full-bodied man of a Russian sailor, he retreats to his poetry, not so much art but a painfully prosaic, long poem entitled The Oak Tree.

As Act One comes to an end, the melancholy protagonist, now in Turkey on an ambassadorship, falls asleep in yet another lover’s arms. The audience watches as Orlando transforms: he awakes six days later, no longer a boy but a beautiful woman with flowing hair, a shapely form, and those radiant, haunting eyes.

With Orlando a woman in form, but now a grownup man in sense of self, all gender-defined understandings are turned on their societal heads.  With his new body, he must discover a new set of behaviors: those of a woman.

The second act takes the audience through the evolution of those understandings and those behaviors, particularly as they relate to male/female relations.

A fantastic three-member male chorus plays not only a host of characters but also snatches of text describing the inner and outer goings on of self and world.

Leading the ensemble is most definitely Mario Baldessari.  Not only does he turn in a marvelous Queen Elizabeth but his maid Grimsditch’s nuanced defense of her marriage ring had me laughing throughout.

Andrew Ferlo and Jay Hardee round out the cast, playing everyone from an Archduke to a Marmaduke, with a salesman and a sea captain thrown into the mix.  Both actors draw sharp, funny characters in this breakneck speed, rolling narrative.

Director Amber Jackson has done a wonderful job handling the text, keeping it clear and focused.  She has brought several fantastic imaginative inventions to the scenography, such as umbrellas turned jalopy wheels twirling down the road and a lovers’ duet on ice with appropriate skater’s pose and sound of blade on Thames.

The real challenge of putting Virginia Woolf on stage, be it the streaming consciousness in her To the Lighthouse or her more playful Orlando, is that in her works’ external action is always trumped by internal, subjective mediation.  And Orlando is definitely no exception.  In other words, the dramatic action is less important than the psychic journey the character is on. 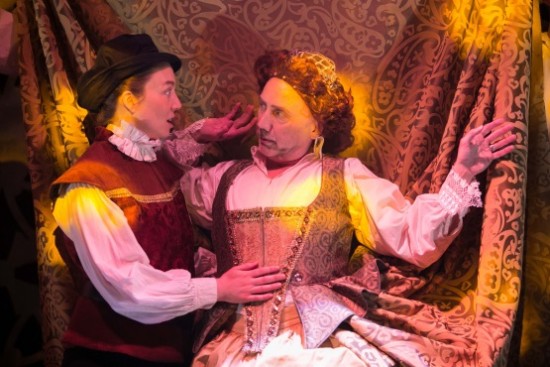 Additionally, in this fabulous piece of prose, the Orlando in Orlando is not so much a character as audience and actors have come to understand the term.  Orlando is a phenomenon, a being more mythological than human, more like a–dare I say it–a soul than a persona.

Thus, when we plunge into Woolf’s Orlando, we wash ourselves in a psychic landscape where gender is more a misnomer than a definition, where sex is less a biological fact than an existential construct.

Like in the world of the Greek Teiresias–man, then woman, then man again; or the gender-bending Dionysus turning a masculine Zeus on his head–in Woolf’s landscape we choose our personas from a multiplicity of possible expressions.  On her landscape, our romantic attractions are some strange Jungian dance of anima and animus, shadow and self.  To know oneself in such a mischievous way is to embrace not so much a fixed definition of self but a host of selves traversing generations, genders, roles, lives.

Running Time: one hour and 45 minutes with an intermission.

Orlando plays at The Theatre On the Run, 3700 South Four Mile Run Drive, Arlington, VA, through March 23. For tickets or info click here.