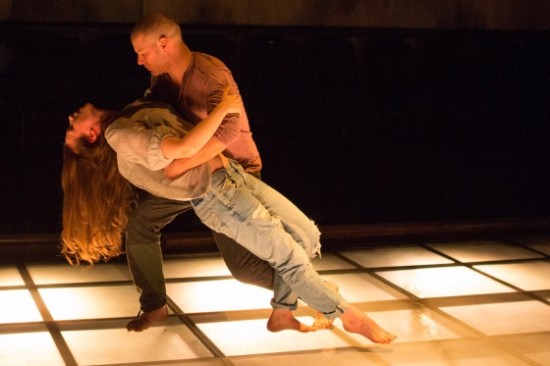 What do you get when you gently push a hand grenade, with the pin yet pulled, into a…vulnerable body part?

What do you get when you disconnect your lover’s family jewels and flush them down the toilet? 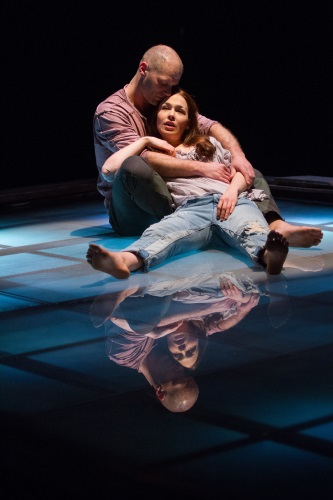 Others might call that a romance for the modern age.

Whatever Tender Napalm is, and it is now playing at the Ark at Signature Theatre, you are sure to be partially engrossed by the sheer audacity of the piece, partially confused by the piece’s structural anomalies, and partially enraged by what playwright Philip Ridley has elected not to tell you (or perhaps what he decided to tell you but only at the end, thus throwing the piece into a deluge of questions and after-thoughts).

Except for the final scene, in which the characters are offered to the audience as tender, sweet teenagers in a “realistic” setting, Tender Napalm is a playwright’s piece: full of who can top this funny word play, egocentric razzle dazzle flights of the imagination, and “is this child’s play disguising itself as symptoms of PTSD” or “is this PTSD pretending to be a fun filled lovers’ dual between the sheets”?

The story is this: two actors–one male, one female–are trapped in an arena surrounded by a live audience (think Star Trek, Alternative Universe, two Lazaruses) doomed to fight each other for all eternity in some psychic landscape.

The two characters are emotionally damaged, given to psychic breakdowns when they let their imaginations fly too rapidly too far.

The two characters are, in a sentence (except for that final scene) two actors playing characters, detached from any history, any social context, any geo-political territory (save what their accents might provide), any family and friends, any “anything.”

Laura C. Harris and Elan Zafir play this doomed pair of lovers with ferocious abandon.  They capture not only the pair’s sadomasochistic toying with each other but also their occasional longing for a different world.

Zafir starts us off by proclaiming to his acting partner, albeit character-partner in psychic space, that he wants to press a bullet between her wet lips.  From there, his character only escalates his verbal, imaginative challenge.  Zafir’s performance is an athletic tour de force.

Though pained by Zafir’s crude foreplay, Harris accepts the challenge, and with feminine understatement tells her partner that if he likes grenades in the bedroom, she likes sharp things and has no qualms about using them.  Harris’s performance as the teenager grown hard and cruel by the world is emotionally riveting.

The two actors send this dramatic game of The Dozens to poetically vulgar heights.

Matthew Gardiner has handled Ridley’s script and the in-the-round staging at Signature well.  For the most part he keeps the action moving, opening the actors to all parts of the audience.  He successfully balances the savage and the tender, even if from this viewer’s perspective in the end the level of cruelty overshadowed the tenderness. 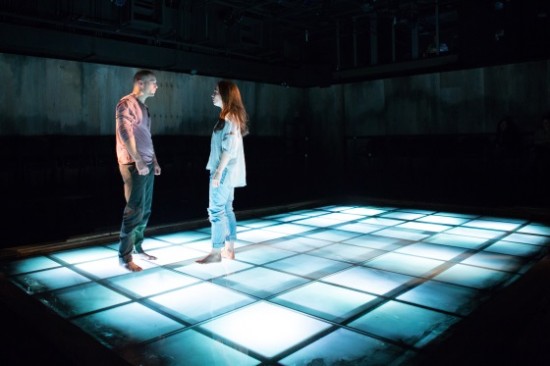 The production team did a strong job.  Set designer Luciana Stecconi’s arena of light created the perfect platform for this “naked” performance, i.e., performance without a situation other than the act of performance itself.  Lighting designer Colin K. Bills offered subtle lighting shifts that did not so much delineate the real from the imagined (if such a delineation exists) as suggest a change in direction.  Laree Lentz gives the actors very average, somewhat distressed clothes that give full rein to the actors’ athleticism.

Of particular interest was the sound design and original compositions by Eric Shimelonis, which suggest a war zone and a fierce combat.

In Matthew Arnold’s famous poem “Dover Beach” a couple embraces in their bed while outside the ocean waves and human history swells into conflict.  He writes:

Ah, love, let us be true
To one another! for the world, which seems
To lie before us like a land of dreams,
So various, so beautiful, so new,
Hath really neither joy, nor love, nor light,
Nor certitude, nor peace, nor help for pain;
And we are here as on a darkling plain
Swept with confused alarms of struggle and flight,
Where ignorant armies clash by night.

And so it seems that Philip Ridley has given us a couple, embracing in their bed as on a desert island.  Whereas Arnold has his lovers cling to one another in an attempt to escape the brutality of the world beyond the window, Ridley’s lovers have become infected by the world around them.  The war, the torture, the violence, the willful inflicting of pain upon the other, has turned their once tender, innocent tryst at a garden party into a brutal sex game where the experience of pain, and more pain, has replaced any release of pain into pleasure.

If Ridley’s Tender Napalm gives us the shape of love in the modern world, where unicorns lead us not to happiness but to unflinching terror, then we can only grit our teeth and weep for the modern world.

If, on the other hand, Tender Napalm offers us a poetic landscape of our psychic existence–an unholy conflation of lust, brutality, hate, savagery, tenderness, despair, fantasy, hope, ambition, war, and (yes) love–then we can seriously say it is time to stop compartmentalizing our lives.

Rather, it is time to acknowledge that no couple is an island and that what happens in the world around us will permeate every niche and crevice of our private spaces, infecting our “happy” world with its goings and comings and dyings and agonies.  So prepare.

Running Time: 95 minutes without an intermission.

Tender Napalm plays at Signature Theatre through May 11.  For more info, click here.