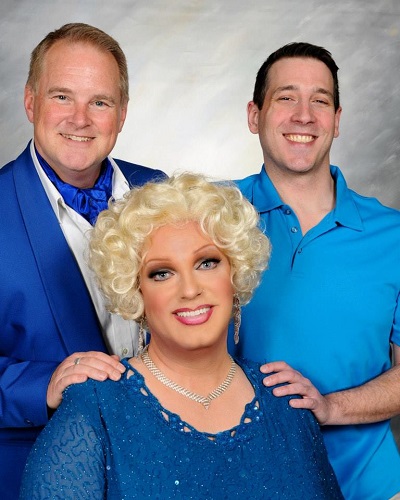 Veteran Director Tom Colonna successfully leads his energetic troupe through seamless set and costume changes and well-delivered songs and comedy to provide non-stop joy.  On the evening this particular performance was reviewed, however, there were mic issues including unevenness in the volume among the ensemble and a feedback episode during the second act.  Hopefully, the sound problems will be worked out in subsequent presentations, but that flaw did not detract from the overall quality of the show and the delight theatergoers will soak in like the warm Saint-Tropaz sunshine—the setting for the musical.

La Cage aux Folles opened on Broadway in 1983 and had spawned two hit revivals. Earlier two successful French films with the same title had been adapted from the play and a third one premiered in 1985. In 1996 the hilarious film The Birdcage, starring Nathan Lane, Robin Williams and Gene Hackman, wasbased on the French movie and became a box office smash.

‘La Cage Aux Folles’ is an expertly directed and performed musical in which the Dundalk Community Theatre should be proud to present, no matter who comes to visit.

With the Dundalk Community Theatre’s mounting of La Cage, the lofty expectations are met.  Georges, played by Jeff Burch, owns a glitzy, drag nightclub in Saint-Tropez, and his gay partner, Albin, played by Edward J. Peters, moonlights as a glamorous drag diva, Zaza.  They share an apartment above the club.

Georges’ 24 year-old son Jean-Michel (Randy Dunkle) shocks both he and Albin by announcing that he is engaged to (gasp!) a woman—the daughter (Amanda Dickson) of the head of the conservative Tradition, Family and Morality Party (James Hunnicutt) whose goal is to close down the local drag clubs. Jean-Michel wants his fiancée’s parents to meet Georges as well as his birth mother. But the flamboyant Albin/Zaza must not be seen for at least that one night even though Albin served as the boy’s de facto mother.

What ensues is a hilarious, outrageous romp, testing family bonds amidst the battle between conservative family values and genuine young love.  The show also poignantly illustrates that children of gay parents fare quite well and that the love these parents have for their child is as genuine as anyone else’s.

Edward J. Peters, who has performed in a half dozen Dundalk Community Theatre productions, excelled as Albin, the tart, clever, bad-tempered drag performer.  He is the comedic focus of the production and turns in a stellar performance with rapid comebacks, expressive body language and gestures.  It was not all laughs, however.  Though what appears to be a pragmatic decision to “hide” the effeminate Albin from the conservative prospective parents of Jean-Michael, the audience roots for him.  Mr. Peters elicits that empathy with his strong acting ability.

“A Little More Mascara,” a fun song with Les Cagelles, Albin’s back-up group of drag queens (although not all were played by men) is enjoyable. Mr. Peters’ reprise of “Song on the Sand” with Jeff Birch was heartrending.  He also excels in the rousing, memorable group number “The Best of Times.” But his signature song, which became an unofficial gay anthem worldwide, the moving “I Am What I Am,” sparkled as it concluded the first act.

For his part, Jeff Burch delivers a solid, well-rounded performance as Georges whose comedic talents are evident in his witty repartee with Albin.  While those interactions are largely humorous, Fierstein’s book gives the show its depth with a number of sentimental and tender moments between the couple.  This is most evident as Georges struggles to persuade Albin to disappear for that night and at the same time, reassures his love for him. The chemistry between the two is intrinsic to the production’s success, and they pulled it off exquisitely.

Mr. Burch, a stage veteran who last appeared on the Dundalk stage in Titanic, showcases his magnificent tenor voice in such songs as “With You on My Arm” in a duet with Mr. Peters, “Song on the Sand” and “Look Over There.”

J. Jeffrey Harrison, who plays the butler, er, maid Jacob, is a sure-fire crowd pleaser adding to the already abundant amount of laughter.  Playing up the character’s campiness to the hilt, Mr. Harrison delivered the goods with well-placed barbs and comedic movements.

Randy Dunkle does a fine job of playing the young, low-keyed son Jean-Michael who pleads for the night with his prospective in-laws to go well.  Of course, it doesn’t, but that is the joy and magic of La Cage.  Mr. Dunkle demonstrated his strong vocal skills in “With Anne on My Mind” and particularly in the reprise of “Look Over There.”

Those in-laws make their appearance in the second act. James Hunnicutt as the conservative moralist politico Edouard Dindon and Kristen Cooley as Marie Dindon, his wife, also add laughs to the production.  Ms. Cooley’s character is trying to escape her uptight husband’s morals and be free to release her inner fun-loving persona.  She is splendid in the role.

The campy and sometimes naughty drag performers La Cagelles sparkled.  In the show’s opening number “We Are What We Are,” the group of nine, decked out in layered, peel-off costumes, nimbly tap-danced to Tom Wyatt’s excellent choreography and clearly set the mood for the production.

Although no costume designer is listed in the program, the gowns, many of them feather-laden, are colorful and sometimes rather odd to say the least.  One may even say gaudy.  Nonetheless, they along with Scenic/Lighting Designer Marc W. Smith’s eye-pleasing set added much to the palette of this rich, colorful production.

The set representing Albin and George’s apartment is outstanding.  Pink walls and four pink doors with lavender trim and matching cushions on the sofa highlighted the set.   A sizable painting featuring a male figure adorned the wall.  That was replaced by a large wooden crucifix and smaller versions throughout the room as the apartment underwent a makeover to impress the Dindons on the religiosity of the couple.

La Cage Aux Folles is an expertly directed and performed musical in which the Dundalk Community Theatre should be proud to present, no matter who comes to visit.

Running time: Two hours and 40 minutes with an intermission.