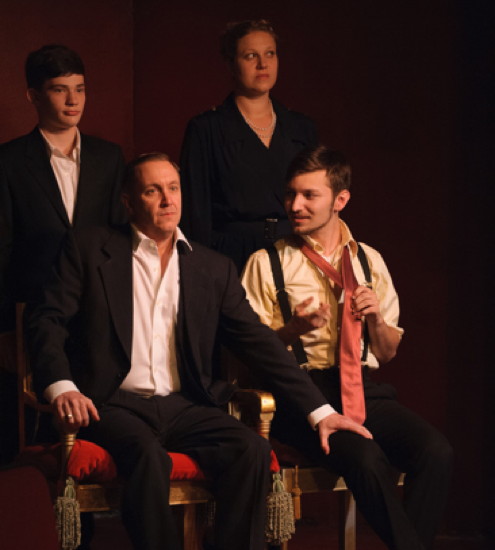 Cohesion Theatre Company at Spotlighters Theatre brings to the stage Christopher Marlowe’s play Edward II, adapted by Jonas David Grey (who also plays Edward II) and directed by Brad Norris, with the setting modernized to the late 1930s.  The historic Edward II was King of England (7 July 1307 – 25 January 1327), and Marlowe’s play is about love, desire and royal responsibilities. Or is Edward II really about selfish love, irresponsibility, fear of homosexuality, deception and the Devil himself?

Most historians agree that Marlowe wrote this play because of his fascination with the relationship between Edward II and Piers Gaveston, who was long rumored to be Edward’s lover.  Marlowe hints of the strong bond between the two men, and in Grey’s adaptation, there is no question that Edward and Gaveston are lovers. Marlow’s Edward desired playing with his lover more than attending to his responsibilities or defending England from its many enemies on the battlefield.  Edward’s closest advisors at court, his wife, Queen Isabella of France, and the powerful Lord Roger Mortimer, blamed Edward’s disrespectful behavior on his lover Gaveston and sought ways to banish him from Edward’s side.

I’m glad I saw this production on the Spotlighters’ stage, the intimacy of which lent itself well to this personal drama…

They are successful in condemning Gaveston to exile, but Edward is able to persuade his wife to convince the advisors to allow Gaveston to return from exile.  The advisors agree to this only because Gaveston would be easier to kill if they knew exactly where he was.  Gaveston is then quickly killed, which triggers Edward’s downfall both in power and mental stability.

Jonas David Grey, who plays Edward II, immediately fills the stage with a presence rivaling that a king.  He is supremely self-assured as Edward, a man who loves, disappoints and bleeds.  During the few times he leaves the stage, Grey’s presence is deeply missed.  His performance alone is enough to make this show a must see.

Of course the other cast members contribute to the success of this production. Taylor Rieland as Gaveston is fun to watch as he plays this arrogant and spoiled man, delighting in the power he holds over the King and his top advisors.  Aladrian Wetzel, as Lady Lancaster, is sinister and strong as she stands tall and commands the stage.  John Wright, as Lord Mortimer, hints at the coming war with Germany with his movements and many gestures.  Madeline Long, as Queen Isabella, uses a delicate French accent, and her many costumes add to her role as the Queen.

Matthew Payne as Spencer and Edward’s new lover, and Cassandra Miller as Baldock, are a great pair of conniving advisors to Edward.  Jack Connors as the young Prince Edward III has great charisma and was completely believable as a young monarch who will command thousands.

Not wanting to give too much away, I do have to applaud Lana Riggins’s lighting design, especially during one of the final scenes when the Angel of Death visits Edward in his prison cell.  Cassandra Dutt also adds to this scene with her strong performance as an enforcer in Edward’s prison.  Heather Johnston, who plays Edward’s sister, Lady Kent, gave a powerful performance while pleading for Edward’s life.  Daniel Douek as Lord Warwick has a great Irish brogue, and Ashley Anna Kowalski as Lady Pembroke, Dominic Gladden as Biship of Coventry and an Abbot and Yitzi Turniansky round out this talented cast.

Another special treat in this show is the entertainment before and after the show and during intermission.  The Black and White Milk Bar is a corner of the theatre transformed into a 1930s nightclub, with singers and dancers mingling in the audience.  Jim Knost provides the unwavering accompaniment on the piano, as does Christine Thomas-O’Meally. Dyana Neal, Beth Weber, Steven Lampredi along with Thomas-O’Meally sing wonderful 1930s-era songs.

I’m glad I saw this production on the Spotlighters’ stage, the intimacy of which lent itself well to this personal drama, making it all the better for watching Jonas David Grey perform!

Running Time: 2 hours and 20 minutes with one 15-minute intermission.