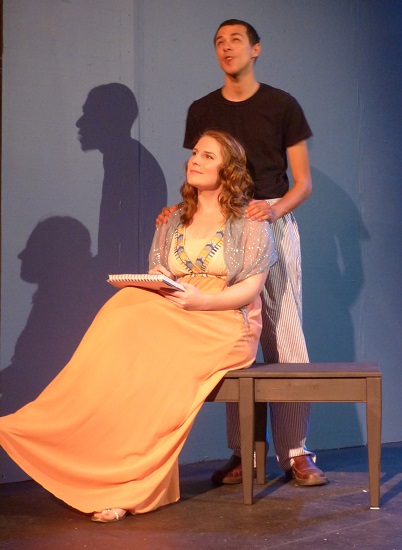 Desiree (Beth Amann) and Josef (Justin Johnson) in ‘Under the Poplar Trees.’ Photo by Bill Toohey.

With the passage of time and generations, it gets harder to interest people in a play about the Holocaust.  It’s not that we’re insensitive; if we’ve raised our children right we’ve told them the gruesome stories about the concentration camps; if we’re courageous we even tell them some of the darker secrets, the demeaning things prisoners had to do in order to survive.

In spite of its serious subject matter, Popular Trees reminds us of the resilience of the human spirit and the need to celebrate those people who made a difference, especially because they did not have long to live.

So what more is there to see?  Quite a lot, actually.  Because with all the big, gory details burned into our memory we can now turn to the human side of the story, the smaller chapters that give us a glimpse of the people who stubbornly survived.  Instead of mourning, we can celebrate the creative spirit and love for life that continued to grow like the poplars of Dachau prison camp, where our scene is set.

Local playwright Rosemary Frisino Toohey has given us Under the Poplar Tree, a play dedicated to the friendship of two prisoners in Dachau, only one of whom is destined to survive.  In spite of its serious subject matter, Popular Trees reminds us of the resilience of the human spirit and the need to celebrate those people who made a difference, especially because they did not have long to live.

Perhaps the most refreshing aspect of the play is its central character, the survivor Meyer, who—in a welcome plot twist—categorically refuses to discuss his time in Dachau with anyone, even his own wife and family.  Given how many survivors have volunteered to talk about their experiences, it’s easy to forget what a harrowing sacrifice it is to have to relive those times.  Meyer—played here with infectious, gregarious charm by Jeff Murray—is determined to keep that part of his life a secret to his grave, even to the point of cutting off communications with his sincere but naïve grandson, Aaron (played by Max Lanocha), who breaks an unwritten family rule by daring to ask.

The action begins in the barracks at Dachau, where the younger Meyer—played here by a brooding, fatalistic Karim Zelenka—is introduced to his new bunkmate, the incurably optimistic and resourceful Josef, played here with indefatigable charm by Justin Johnson.   Josef draws Meyer out of his funk, and through the course of the evening he teaches Meyer the secret to survival.  Turning the reality of the camp on its head, singing his favorite operas and folk tunes, Josef persuades all of us to see Dachau for the cruel absurdity it was.  Together Meyer and Josef form a bond that, although not destined to last, is compelling to watch.

As Meyer’s wife Clara, Annette Mooney Wasno does a good job establishing the loving but always somewhat removed relationship the couple has had, knowing which buttons never to push with her husband but giving quiet witness to those who love him and want him to share more of his past life.

The play itself is adequately structured, with a few awkward bits of exposition (Aaron’s downstage historical tidbits seem forced, and perhaps could have been staged more along the lines of a journalist fleshing out his story on a laptop).  And there is a curious series of scenes between our hero Josef and Desirée, a heavenly being in more than one sense of the word, who seems to serve as something of a reward for Josef’s being such an indefatigable mensch (a note to the Yiddish-impaired: look that one up).  Beth Amann is charming and coquettish in the role of Desirée and earns every bit of attention, wanted and unwanted, that Justin Johnson’s Josef lavishes on her.  Toohey uses these scenes to add an extra spiritual dimension to the story, which seems unnecessary but which make perfect sense when you have such a charismatic creation like Josef on your hands; the more we see of him, the more we are reminded of the spirit required to survive humanity’s darkest hours.

The play has the feel of a spare, workshop-style production, with Tony Colavito’s discreetly painted flats and projections of photos from the Dachau camp (both then and now) to illustrate the desperate conditions there, contrasted by the peaceful bits of nature that continued to thrive in spite of it all.  Miriam Bazensky’s direction is conservative, and with Charles Danforth III’s lighting design this helps to focus our minds on the actors and the action.  Sound designer Brad Ranno provides a few telling musical interludes (a reminder, among other things, that the Nazis claimed to be highly cultured), and the costuming appears to have been something of a group effort.

One personal note:  if you come to see Under the Poplar Trees and you happen to see an elderly person or two in the audience, be sure to strike up a conversation with them during the intermission.  Shows like this bring out survivors, their families, and—on the night I went—a gentleman who lived in a French camp during the war.  Their stories—the ones they choose to share—will remind you how important it is to watch and listen to them every chance you have.

Driving/Parking Tip: Drivers from Washington, D.C. may find it easier to use 295 (the B-W Parkway) into and out of Baltimore; simply drive into town, turn right on W. Pratt, and proceed a mile or so until you see S. Ann Street.  Turn right onto S. Ann and the theatre is half a block down on your left.  Parking suggestion:  the theatre has a special parking lot (for $5-cheap!) and all you need do is put your flashers on in front of the theatre, run in and get a pass, and you will be directed to the lot nearby.