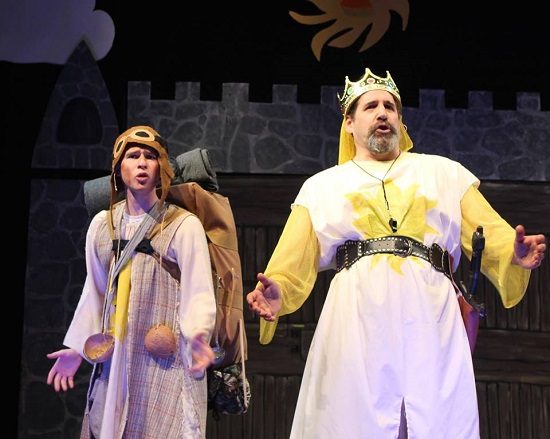 For a musical to be successful, all the components must jell.  Of course, there must be a good a score and lyrics as the starting point.  But then you need a solid ensemble, good technical elements and staging and proficient direction to put it all together.  The Beth Tflioh Community Theatre’s (BTCT) professional-caliber production of Spamalot (“A new musical lovingly ripped off from the motion picture Monty Python and the Holy Grail”) under the direction of Diane M. Smith succeeds on all fronts.

The book and lyrics were by Eric Idle who also composed the music with John Du Prez.  Mike Nichols directed the original Broadway production of Spamalot in 2005 garnering three Tony Awards including Best Musical among 14 nominations.   It ran for over 1,500 performances, and the show has been seen in over a dozen countries.

The zany parody of the legendary British leader King Arthur contains an irreverent goofy plot that eschews any semblance of political correctness. It centers on King Arthur’s quest for the Holy Grail.    But that merely serves as a vehicle to string together a series of oddball encounters and shtick augmented by a deliciously funny, tuneful and clever score.

Songs like “I Am Not Dead Yet,”  “Always Look on the Bright Side of Life” and “Find Your Grail” are iconic to this show and will keep you humming well after the final curtain.  The cast in this BTCT production shows off its vocal and dancing talents throughout, and the superb seven-piece orchestra under the direction of Chris Rose, who did a masterful job in BTCT’s Edwin Drood last year, ably supports the sturdy vocals by the performers.

Leading the cast is Paul Margolis as the central character King Arthur. You knew you were in for a good time when the program notes offer this: “As you read this program, Paul Margolis is pacing backstage, learning his lines and attempting to master an authentic, Middle-Ages English accent.”

While Mr. Margolis’ tongue-in-cheek performance is spot-on, demonstrating strong stage presence and precise timing with his comic lines, his baritone vocals also serve him well.  “King Arthur’s Song;” “Always Look on the Bright Side of Life,” a glorious dance number with his Knights; and “I’m All Alone” with his dutiful servant Patsy (Asher Varon) and his Knights are good examples.

Spamalot at BTCT is a well-directed, well-performed production highlighted by a talented and energetic cast and crew.

Mr. Varon turns in an excellent performance as Patsy.  He follows King Arthur around banging two coconuts shells together simulating horse’s hooves as King Arthur “rides” before him.  He excels in “I’m All Alone” as the counterpoint to King Arthur with a strong voice and comical expressions.

The only female lead is the Lady of the Lake played exquisitely by Sarah Miller.  Demonstrating a wide range with her pitch-perfect voice, Ms. Miller excels in such numbers as “Lady of the Lake,” “The Song That Goes Like This” and “Find Your Grail.”  But her marvelous and cleverly worded solo, “Whatever Happened to My Part,” soars.

Arthur’s Knights provide pillars of support to the show.  Will Poxen as Robin, Josh Margolis as Lancelot and Will Meister as Dennis Galahad are excellent.  Mr. Meister’s duet with Ms. Miller in “The Song that Goes Like This” is performed very well.

Mr. Poxen’s hilarious rendition of “You Won’t Succeed on Broadway” excels.  It’s about the need to find Jews if there is to be a successful Broadway show.  There was a bit of apprehension by the largely Jewish BTCT audience at the beginning of the number, but they warmed up to it by the song’s end on the day this show was reviewed.

Josh Margolis plays both Lancelot and the French Taunter, keeping the audience laughing in both roles.

Then there is Josh Schoff who also plays multiple parts.  As Not Dead Fred Mr. Schoff is a key s singer and dancer as the number’s namesake. Later, he plays Prince Herbert with all the camp and flair one could expect from a 10th century prince who has no interest in the opposite sex despite his authoritarian, music-hating father’s (Will Meister) insistence he marries a woman.  Mr. Schoff’s back-to-back numbers “”Where Are You?” and “He’s Going to Tell” are fun.

The production number that follows, “His Name is Lancelot,” with the ensemble attired in flamboyant garb, is one of the highlights of this show as it celebrates the outing of Lancelot as gay and the future mate of Herbert.

The remainder of the large ensemble also does a stellar job in backing up the leads.  Dylan Margolis, playing three different roles, heads the group.

The choreography under the direction of Amanda Dickson who also performs as the Historian (Narrator) is precise and well-coordinated.  “Knights of the Round Table” is a large production number that demonstrably showcases the performers’ dancing skills.

If that wasn’t enough, Ms. Dickson teamed up with Sharon Byrd to design the costumes that are authentic to the medieval period.  Many different types of costumes for the myriad characters are needed and the results are quite impressive, especially for a community theatrical production.

Evan Margolis, who is also BTCT’s Associate Artistic Director and Diane Smith, led a team that constructed a simple but functional set.  Two simulated stone towers at the sides of the stage and a large stone and wooden gate form the core set.  Later, a stage-wide curtain with a lovely painted forest is used effectively.  Several props, such as a large wooden rabbit, a cow and fake human limbs add to the mayhem.

Laura Levon’s lighting design is also effective as scenes and moods shift.  Sound designer Elan Hamburger does a fine job as all voices were clearly audible and echoes are suitablty created when authoritative pronouncements are made (such as when God is talking) and clasps of thunder on occasion.

Spamalot at BTCT is a well-directed, well-performed production highlighted by a talented and energetic cast and crew.  The problem is that it plays for only three more performances; therefore, not allowing audiences much time to find their elusive Holy Grail.  But they should try.

Spamalot plays through August 21 (except for August 19) at the Mintzes Theatre/Rosen Arts Center located at Beth Tfiloh Dahan Community School, 3300 Old Court Rd., Pikeville, MD 21208.  Tickets are $15 and can be reserved by calling the Beth Tfiloh Arts Department at 410- 413-2436 or by visiting online. Tickets will also be available at the door.