Theatre Review: ‘Sunday in the Park with George’ at Signature Theatre 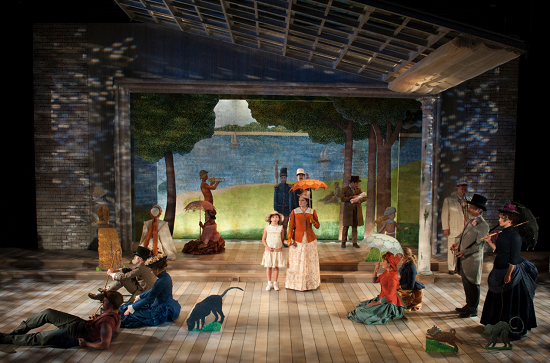 The cast of Sunday in the Park with George at Signature Theatre. Photo by Margot Schulman.

You will never look at a painting the same way again after experiencing Stephen Sondheim (Music and Lyrics) and James Lapine’s (Book) musical, Sunday in the Park with George.

Now in its 25th season, Signature Theatre brings this musical, and the painting that inspired it,  A Sunday Afternoon on the Island of La Grande Jatte, to life in a production that is picture perfect.

Director Matthew Gardiner takes us to a park just outside of Paris which is the scene for Georges Seurat’s famous painting, A Sunday Afternoon on the Island of La Grande Jatte, which today hangs at the Art Institute of Chicago.

Georges Pierre Seurat was a French Post-Impressionist who is noted for inventing the painting techniques known as chromoluminarism and pointillism.  Pointillism is a technique of painting in which small, distinct dots of pure color are applied in patterns to form an image.

While the story is a fictionalized account of both the characters in the painting and Georges, the commentary on the challenges in understanding life and art is very real.

George comes across as a cold artist who is only good at expressing himself through his paintings.   Through the way the characters describe and interact with George, it is implied (or at least the way I interpret it) that he may have some form of autism because of his impaired social interaction and by his restricted and repetitive behavior. This doesn’t stop Dot, one of the young ladies featured in his paintings from being his lover, at least at the beginning.

Dot, as George so rudely points out to her, doesn’t know how to read.  It’s difficult being a model and companion for George.  The sun is hot and she has to stand still for hours on end, lifeless.  Soon she can’t take life with the cold artist anymore and becomes involved with a man that is the complete opposite of George.  Louis, the baker is popular, friendly, and kind.  He fills the void for Dot that George could never accomplish, and yet it seems that her heart belongs to George.

Act II is almost like a different musical and yet it ties everything together.   It is now 1984 and Georges’ work is on exhibition in America, where his and Dot’s daughter Marie, as old as the painting, have come to see it.

Brynn O’ Malley in the role as Dot is on point.  Not only does she have impeccable comedic and dramatic skills, she also has a suitable singing voice for executing Sondheim’s difficult music.  Here, her character must spit out a serious of lyrics at lightening speed, all while enunciating the words and expressing the meaning behind them. She shows her versatility in Act II where she has to switch roles and play an elderly lady named Marie.

Claybourne Elder gives an appropriately restrained performance as George.  It is a tricky balance between portraying an artist that is cold towards other people while remaining emotional enough to keep the character interesting.  It may appear to some that he is under-acting, but for me, I believe it is more accurate to the role if we understand that George puts all his emotion into his paintings and not into people.  As far as his singing is concerned, it is more than adequate, despite a few pitch issues at the performance I attended.

The supporting cast is headed by the always entertaining Donna Migliaccio as Old Lady, a cranky and demanding lady who asks a lot from her Nurse (Maria Egler) while sitting in the park.

Joseph Mace as Louis the baker is another stand-out performer.  He is fun to watch as he hands out for free his pastries for people to sample.

The production is enhanced with the scenic design by Daniel Conway, costume design by Frank Labovitz, lighting design by Jennifer Schriever, sound design by Lane Elms, and the projection design by Robbie Hayes.

This production was also enhanced by the live orchestra conducted by the tireless Jon Kalbfleisch.  The talented musicians and the ensemble cast did justice to Sondheim’s score.

Not only is Sunday in the Park with George entertaining, it is also meaningful.  I took away from the performance  important lessons about life and art.  For example Sondheim says, “It’s not so much do what you like as it is that you like what you do.”  This is a wonderful start to Signature Theatre’s 25th anniversary season.

Advisory: a few moments of profanity.