Theatre Review: ‘The Fall of the House of Usher’ at the Pallas Theatre Collective 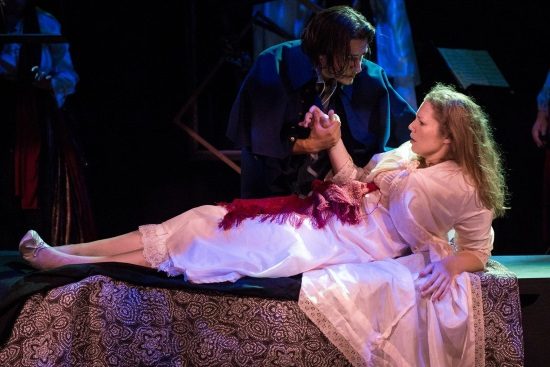 Mikey Cafarelli and Kristina Riegle. Photo courtesy of the production.

Another black box theater and another delightful night spent engaging with the burgeoning arts scene in Anacostia! The Fall of the House of Usher with book and lyrics by Molly Fox , music by Sarah Hirsch and directed by Tracey Elaine Chessum (a delightfully female affair!) is a new musical based loosely on Edgar Allan Poe’s 1839 notorious short story of the same name.

Poe’s The Fall of the House of Usher is told from the perspective of a nameless narrator undertaking a journey to a remote part of New England to visit his friend, Roderick Usher. Roderick suffers from a variety of enigmatic diseases, recognizable today as hyperesthesia (extreme sensitivity to textures, lights, sounds, tastes and smells) and hypochondria (a conviction that one is always ill). In the course of conversation, Roderick reveals to the narrator that he believes the dilapidated House of Usher is alive and his illness the result of the house’s supernatural influence.

The Pallas Theatre Collective’s The Fall of the House of Usher deserves praise for the wonderful dynamism and palpable dedication of its cast, depth of its character development and creativity of direction.

Despite his own growing anxiety, the narrator does his best to contribute to Roderick’s welfare. The two friends amuse and distract themselves by playing instruments, reading books aloud and painting. Roderick’s sister, Madeline, a cataleptic (a disability characterized by muscular rigidity and the appearance of death), periodically wanders in and out of the room in a ghostlike trance, eventually dies and is buried in the family tomb. Inevitably, it transpires that Madeline was buried alive and disheveled from a week spent fighting her way out of the tomb, she appears in the doorway in the midst of an epic storm, falls on her brother and together they die. The narrator, rightly disturbed, exits the House of Usher with great rapidity, looking back just in time to witness the House of Usher literally splinter into two pieces and sink into the tarn.

The Pallas Theatre Collective’s The Fall of the House of Usher deserves praise for the wonderful dynamism and palpable dedication of its cast, depth of its character development and creativity of direction. Roderick, Madeline and James are plagued by the ancestral ghosts of the House of Usher introduced as Edilfred Usher, the mass murderer (Laura Rocklyn), Merowald Usher, the prostitute (Hilary Morrow), Elistan Usher, the opium fiend (Russell Silber) and Alabric Usher, the slave driver (Jon Jon Johnson) in the song “Evil In Our Blood.” The direction and choreography (Chris Martin) of the ever-present ghosts is executed so seamlessly that their omnipresence enhances the atmosphere and depth of the production, while never distracting from the central performances of Roderick, Madeline and James.

Dark humor abounds throughout The Fall of the House of Usher, providing timely relief as necessary. Rocklyn and Morrow do double duty as the portraits of Esme and Bertha, respectively, who take it in turns to cheerfully taunt James for his many failures in the song “Twelve Hours.”  Peter, the butler (Luke Cieslewicz) is superbly droll, providing relentless dry critiques of James and taking pleasure in ignoring all his requests. Olivia, the maid, (Amy Conley) is Peter’s partner in crime, perpetually dithering and meddlesome.

The entire ensemble is challenged with a vocal score requiring the execution of complex, multi-layered harmonies that would make any practiced vocalist shudder.  Hentrich displays powerful tenor vocals and faithfully maintains a steely eyed, whole hearted insistence that death is most certainly upon him. Riegle is well-matched with Hentrich, negotiating with relative ease a vocal score that would make any first soprano quake with fear. Cafarelli’s chief strength is his ability as an actor but while he is a very capable baritone, he is often overpowered by Hentrich and Riegle’s prodigious vocals.

In my opinion, the only truly disappointing aspect of the book and lyrics is that the ample number of original poems, songs and stories used to great effect in the original short story were not employed in the book and lyrics of this production. It should also be noted that with over twenty musical numbers in less than two hours, The Fall of the House of Usher is more accurately an operetta than a musical.

The Fall of the House of Usher runs through August 24th 2014 at the Pallas Theatre Collective in residence at the Anacostia Arts Center, 1231 Good Hope Rd, SE, Washington, DC 20020. For tickets click here.