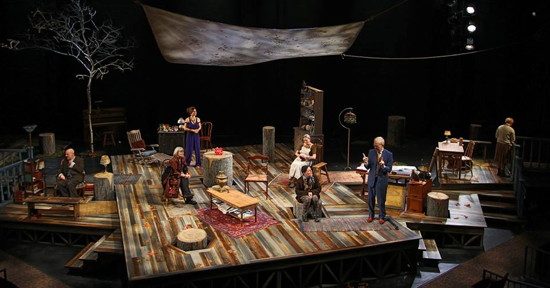 The cast of ‘Uncle Vanya.’ Photo by Danisha Crosby.

Among incurable theatre geeks like myself, there are a couple buzzwords that come up frequently when we see productions like Round House’s new version of Anton Chekhov’s classic play, Uncle Vanya.   For example: if it’s staged so as to remind you that we’re at a show, that this is a theatre and not real life, we call it “meta-theatrical.” Misha Kachman’s scenic design, leaving the stage open all the way to the cinder-block wall upstage and dotted with tree stumps among the household settings, is a signal before the first line is spoken that this is not your typical Chekhov.

The fact that said stumps serve as chairs, mock-sacrificial altars, and places for—wait for it—stump speeches, not to mention their reminder of mankind’s role in climate change (not my words, those come from one of the characters here!), well, that only clinches the deal.

There is also the concept of “haunting,” in which the actors we see before us immediately bring to mind the ‘ghosts’ of their past roles—and in this case, past and present positions of authority in the Washington theatre community. Packed as this Uncle Vanya is with no fewer than four current and former Artistic Directors, five directors, not to mention actors who have distinguished themselves for years in various roles (these categories overlap a lot here), this is definitely a haunted stage—but haunted in a good way. Perhaps the most amusing element here is the prospect of seeing Joy Zinoman, the force of nature who founded Studio Theatre playing a mild-mannered grandma.

Set in an old country estate, the play gives us a glimpse of Vanya and his extended family as they stumble about aimlessly and nearly murder each other in their languor and frustration. For years Uncle Vanya has run the farm with his niece, Sonya, and used the proceeds to support his brother-in-law, the professor Alexander Serebryakov (note the pun). Serebryakov, meanwhile, has remarried after the death of Vanya’s sister—with the blessing of Vanya’s mother, but nobody else.

Things fall apart the minute Serebryakov decides to move to the farm, because he has brought his new trophy wife, Yelena, along. Costumer Ivania Stack has wisely made Yelena into something of a fashion plate, traipsing around in colorful silk slips and form-fitting pajamas, while the rest of the cast schleps around in dull, ill-fitting earth-tones. Small wonder that Vanya and the other men in the house forget what they are doing every time Yelena comes onstage.

The world of Chekhov, and especially Uncle Vanya, is filled with sad sacks; but it’s still amusing to see how clueless they are about getting what they want from life. They move about the stage restless, seemingly powerless, their minds always elsewhere, never saying what they really mean. Chekhov’s idea of a dramatic climax is when someone finally blurts out exactly what they’ve wanted all along.

Given the forcefulness of his stage presence Mitchell Hébert offers an unexpected air of humility and quiet suffering to the role of Vanya. His longing for Yelena, scarcely concealed from the start, is pathetic and touching at the same time. Meanwhile, Marina the family servant, is given a full-blooded performance by Nancy Robinette; her panic at the disorder generated by the professor’s arrival is priceless, and her relief at the professor’s ultimate departure, signaled by two simple words, is delightfully funny.

As Serebryakov, Jerry Whiddon (Round House’s emeritus artistic director) gives us all the self-absorption and arrogance we’ve come to expect from the academy. It’s a delicious coincidence that his mother-in-law Maria, played by Zinoman (herself an emeritus artistic director) agrees with everything he says no matter how absurd. And although Zinoman’s performance might lack the spark one would find in a more seasoned performer, given her outside personality her ability to play cool and compliant counts as acting in my book. As Yelena, Serebrtakov’s wife, Gabriela Fernandez-Coffey gives us all the confusion and desperation of a woman who can’t help but drive men crazy; Yelena is the type who deliberately provokes advances, but who seems to have no idea why her skimpy outfits and sensual physicality send out all the wrong messages.

Current Round House Artistic Director Ryan Rilette makes a decent debut here as Astrov, the village doctor who like Vanya follows Yelena around like a lost puppy. Dressed in a style that is if anything frumpier than Vanya’s, Rilette gives us a glimpse of the local hero who might just succeed with Yelena. His passion for nature, and for the preservation of local old-growth forests (remember the stumps onstage?) is genuine, although I would have liked it if we knew that at least some of the time, his passion for trees is actually his way of avoiding Yelena.

It is always a pleasure to see Mark Jaster, one of the DC area’s most talented mimes, and in a speaking role no less; as “Waffles” he wanders in and out of the action, providing some excellent harmonica work to accentuate the scene, along with Eric Shimelonis who is a triple threat as sound designer, accordionist and actor (in the role of Yefim).

Which brings me to one of the more ‘haunted’ performances here, by Kimberly Gilbert. In this production she plays Sonya, Vanya’s long-suffering niece, but she was also recently seen as the ukulele-strumming “Pickles”—the equivalent of Jaster’s role—in Aaron Posner’s satire of Vanya, Life Sucks at Theatre J. What’s striking is that in both cases, the character has some sense of optimism, and in both cases the production justifies it. Sonya is a role that has been played with tremendous pathos, and when you read her final monologue you see how easily an actress can slip into a maudlin interpretation. Vreeke wisely leaves room for Gilbert’s Sonya to feel reassured, hopeful, which gives her room to close with a description of the road ahead—rough and thankless as it may be—that actually merits a smile.

It is welcome to find director John Vreeke in such a playful mood with this Vanya, starting with a down-to-earth script. Some of our old translations make Chekhov out to be some doom-and-gloom intellectual; but in his day, he was primarily a comic writer who used every-day Russian to poke fun at the idiocy of daily life. Annie Baker’s fresh adaptation liberates Chekhov in marvelous ways—you hardly ever hear a word that reminds you this is a century-old masterpiece. With a virtually seamless script, a stellar cast and a set that doubles as a virtual playground, this Uncle Vanya is a special treat for regular theatre-going audiences.

NOTE: Audience members with hearing issues may want to know that because the space at Round House is completely wide open, there is an echo effect when the actors speak here which can be very distracting if you are sitting a few rows out from the stage.