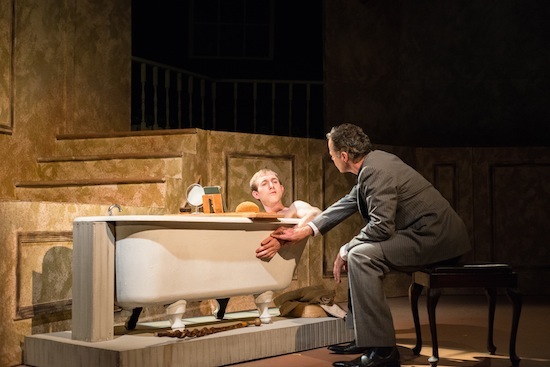 Imagine trying to play the character of a disfigured, grotesque and deformed man without the aid of make-up!

In a time when outer beauty is praised beyond worth, it is only a few who will show great compassion to true victims. Director Anthony Lane Hinkle takes the audience on a journey back to Victorian London with his fruitful and emotional adaption of the story of John Carey Merrick, the man known as “The Elephant Man.”

From a warm front of house welcome, Fells Point Corner Theatre provides an intimate and friendly community setting, with a professionalism and attention to detail seen with larger venues and budgets.

Merrick, born with extreme facial and bone deformities was sold to passers- by in London as part of a freak show. Doctor Frederick Treves takes Merrick from the mocking crowds and the unforgiving streets of London in the 1880’s, into Royal London Hospital. The man described as half man half elephant was smart, eloquent and a writer of poetry, despite his looks.

To this day the cause of this deformity remains a mystery, although Merrick himself claimed his mother was pushed under the feet of an elephant, while pregnant with him.

Grayson Owen is outstanding as the title character adding to the strong, multi-faceted and diverse cast through a journey of victimization, courage, bravery and humor; capturing each emotion perfectly.

Owen showed immense stamina as Merrick, maintaining his character meticulously throughout. Imagine taking on the task of convincing the audience you are a grotesquely deformed man without the aid of make-up or added facial props. Owen did this, effortlessly. With just a 15 minute break in the show, every step, with his wheezing breath makes his character more believable.

Owen uses his posture to represent Merrick’s deformities, from his deformed hand to the constant dragging of his foot in an attempt to walk. His portrayal of Merrick with his voice, breathless, struggling through slurred speech was impeccable.

Kel Millionie captured the era with accuracy using subdued lighting, and a minimalistic set design. Using dulled tones to replicate Victorian London. Kudos to sound designer Chris Aldrich, who chose well in his choice of music throughout the show. A play depicting London wouldn’t have been complete without the sound of rain.

Despite being set in 1884, the use of projected images added to the play and didn’t feel uncharacteristic in helping to relay Merrick’s story.

Sean Coe played Frederick Treves, Merrick’s savior, and doctor. A strong character who didn’t sway from his role in the slightest. Empathic, smart and frustrated at his inability to find answers to Merrick’s condition and further medical advances to help him.

Aladrian Wetzel played a pinhead, a countess and Mrs. Kendal, a Shakespearean actress.  As Mrs.Kendal she endeared the audience to her character.

Several of the cast members covered numerous roles, Elizabeth Ung, moving from a pinhead as part of the original freak show to a duchess.

During the play I noticed that some of the performers British accents were more convincing than others. That made the dialogue at times difficult to understand. Tough break sending a real Brit to watch the show.

Overall, I thought the play was very well executed with every detail. I wasn’t ready for the curtain to come down.