Theatre Review: ‘The Year of Magical Thinking’ at Arena Stage 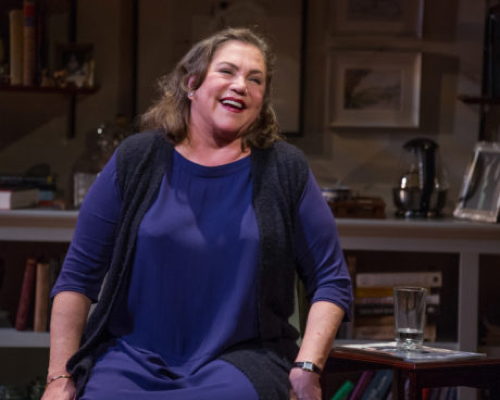 “You sit down to dinner, and life as you know it ends.”

Kathleen Turner speaks this line in the opening minutes of “The Year of Magical Thinking” in Arena Stage’s Kogod Cradle, playing the writer Joan Didion in the adaptation of her memoir of the same title. Ms. Turner brings us quickly into this meditation on walking through sudden loss and subsequent grief, which is based on Didion’s own loss experience losing her husband suddenly and daughter to more gradual illness in the space of a few short years. Turner draws on the accumulated gravitas of her veteran stage and screen career in presenting a compelling portrait of an intelligent, highly accomplished and strong-willed woman – someone who is used to being in control – coming to terms with vulnerability and learning to let go.

Arena Stage’s Kogod Cradle is an ideal venue for a show like this. Intimate, with pew-like seats, it is an apt space for Didion’s play, which is in many ways a layperson’s sermon. Daniel Zimmerman’s set never lets you forget you are in a theater. A single room floats in the space like a diorama; Ms. Turner enhances the sense of detachment by entering stage right from unmasked wings to start the show, making no effort to hide that she is entering a stage space designed for storytelling.

Jesse Belsky’s lighting design denotes subtly the passage of time and marks the dramatic shifts between beats in the script (a follow spot on Ms. Turner occasionally intruded on the smoothness of the light shifts). Roc Lee’s sound design is likewise subtle – the sounds of the sea at a distance emerging at a few keys points in the evening. Director Gaye Taylor Upchurch utilizes the full space in a manner that makes Ms. Turner’s Didion seem naturally at home and yet always at pains to stay connected to her audience.

The strength of that audience connection stems from the play’s two stars: Ms. Turner and Ms. Didion. Didion’s words are every bit their own player here. She tackles a tough challenge: how to dramatize a memoir not originally written for the stage. In this age of the Ted Talk, one can imagine a lengthy monologue-style play getting bogged down either in sentimentality or in an egocentric focus on its author. Didion, by contrast, draws our attention to loss and grief as a universal experience that people respond to in their own individual ways.

Classical images permeate Didion’s script; she speaks of lighting fires, drawing circles, sea tides, and a grief as a “vortex” she tries to stave off, but to which she ultimately surrenders. This imagery connects us to Didion’s experience even if, as she concedes, our personalities would drive different responses to similar events. Her core message is that, while there is value in sharing such experiences, the desire to deny them is part of the human condition. Everyone wants to believe such grief will not befall him or her, and everyone’s experience of it will differ when it does.

For all the darkness of the subject matter, Didion’s story is one of resilience. The “Magical Thinking” of the title, she tells us, is an anthropological term describing primitive cultures taking actions to control circumstances (“If we sacrifice the virgin, the rain will come back”). As an intellectual, she chides herself for doing the same – saving her husband’s shoes following his death, because he might need them when he returns. But Didion’s self-aware intellect recognizes this “magical thinking” as a necessary process of detachment. Ms. Turner conveys this tug-of-war between the author’s mind and heart.

Ms. Turner’s performance brings out moments of genuine humor and strength. Her voice has always been powerful. Didion writes that her husband’s doctor called her a “cool customer;” Ms. Turner is certainly that. Her performance is honest and unforced. But her strong voice cracks and the pain pushing up against her intellectual exterior is palpable throughout, and at times pushes through.

A solo show takes a special kind of stamina and stage presence. Ms. Turner, a two-time Tony Award nominee for the weighty roles as Maggie in “Cat on a Hot Tin Roof” and Martha in “Who’s Afraid of Virginia Woof,” has both. She calibrates her performance throughout, steering towards honest audience engagement and away from sentimentality.