Theatre Review: ‘Much A Do About Nothing’ by U.S. Naval Academy Masqueraders 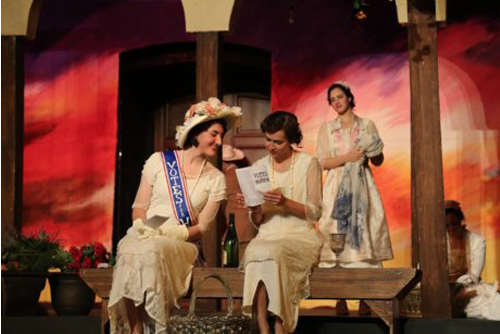 The cast of The USNA Masquerader’s Much Ado About Nothing. Photo courtesy of the Masqueraders.

The war is over, and love is in the air although some may not realize it in this Shakespearean comedy classic performed by Midshipmen from this historic institution. “Much A Do About Nothing” played out at Mahan Hall at the Naval Academy in Annapolis on Friday.

Directed by Dr. Megan Geigner, this Shakespeare classic comedy is set in New Mexico at the end of World War I, as opposed to Tuscany. Mahan Hall is an excellent venue with high ceilings, a large stage and a balcony that allows a great view of the performance. The balcony windows are adorned with both American and British flags, so I felt right at home.

…a fun night out in one of my favorite cities in the country.

For me, the size of this auditorium requires that the actors are mic’ed up in some way. I sat slightly off-center in the auditorium and struggled throughout the play to hear many of the actors. It seemed at times as if only the first few rows caught the funny lines that splatter this funny play. In the second half, I moved closer to the stage but still struggled at times.

The set designed by Andrew Cohen is outstanding; you get the feeling of being in New Mexico with the textures of the materials used and the colors.

Caught up in the heat of love are two polar opposite couples, Jonathan Mendez who plays Signor Benedict and Julia Kalshoven who plays Beatrice. Nick Hajek plays Claudio and Hero is played by Clara Navarro

The wonderfully cast Navarro is beautiful and demure sadly throughout the play her sweet enchanting voice was hard to hear.

Nick Hajek is a real romantic, as Claudio, and he plays it well. This dashing young man who wants so desperately to be in love, but like many people he wants to keep his pride intact. However, despite his big heart, he proves he can act when he throws a vigorous and furious accusation at Hero.

With his booming voice and incredible stage presence, Johnathan Mendez was outstanding in the role of Signor Benedick. He delivers his witty lines with perfect timing, his facial expressions, and acting abilities add to his flawless performance.

Julia Kalshoven as Beatrice is the perfect companion or perhaps not for Benedick – no spoiler alert here! Her character develops well throughout the play. She moves ably from humor to disdain and has exceptional timing.

Other notable performances are Jonson Henry as Leonato and Mike Ware as Don Pedro. Great stage presence as they add drama, comedy and pace to the play throughout.

Jessica Miller and Spencer McVeigh play well as ladies in waiting to Hero. McVeigh as Ursula is hilarious when asked to be subtle in praising Benedict and Beatrice, knowing Beatrice is listening. Subtlety, not her thing — but great job on the comedic timing.

The lighting was basic but appropriate, along with the great costumes this is a fun night out in one of my favorite cities in the country.

“Much A Do About Nothing” runs through November 20th at the Naval Academy. You can’t park inside the academy, so park as close to gate 3 as possible as you will have a short walk to Mahan Hall. Check out the website here for more information on tickets and upcoming shows.