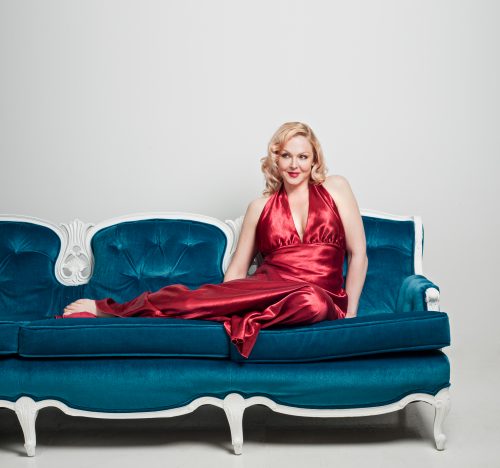 Gone are the days of orchestra’s nationwide appealing to our grandparents, this year’s Holiday Pops at the Joseph Meyerhoff Symphony Hall in Baltimore was the highlight of my year, so far. Well, I am still waiting on a few items from Santa.

….Storm Large is mesmerizing with every breath she takes and every note she hits..

It may have been cold and wet outside on Sunday, December 18th when the Baltimore Symphony played out it’s “Holiday Pops” show, but the atmosphere inside was full of warmth and holiday cheer. Santa held court in the lobby, and the champagne was chilled to perfection. The symphony conducted by Timothy Myers opened the show in style with a traditional Christmas rendition of “ Sleigh Ride.”

This beautiful auditorium is perfect for the acoustics of an orchestra and voices. A modern building bringing back hope and rejuvenation to a once forgotten part of Charm City. The set was tasteful and the lighting elegant and not distracting from the music.

Myers described as a young maestro with his finger on the pulse of today’s musical world, that description is apparent from this fantastic show and his choice of music and performers. Myers introduced the audience to several of the performers that would make this Sunday afternoon a very memorable experience.

The Baltimore City College Choir was breathtaking. But don’t be fooled by the name this choir is made up of high school and senior students. During the intermission I found myself looking for more information on this incredibly talented group of singers so I could hear them again. Marcus Smith directs this talented group.

There were two performers from the choir who joined the Symphony’s guest singer Storm Large throughout the show. Breonna Shannon sang “Oh Holy Night” and Keturah Crawford sang, “Hallelujah.” One word- amazing, two young ladies with a great talent and bright futures.

Storm Large acted as the musical tour guide throughout the show. Beautiful, talented, funny and humble are just some of the words I would use to describe Large, a true professional who is mesmerizing with every breath she takes and every note she hits. A lady with more than 25 years of show business under her belt Large epitomizes how orchestras are adding more variety to their already slated traditional shows.

Large, a rock singer, known for her rather risqué performances and colorful language may not be the obvious choice but she is the perfect accompaniment for the Baltimore Symphony. A simply outstanding performer.

Large jokes throughout the show about what she describes as her checkered past as rock singer, she asked if the audience had googled her. Her humor added to the overall experience of the “Holiday Pops.”

Just when you think the show can’t get any better– cue the dancing Santas. The Baltimore School For the Arts Dancers, performed a tap number fully decked out in Santa costumes, not an easy task.  A fun and flirty routine proving you don’t need to head to New York to see a lineup worthy of the Rockettes.

The show ran through Sunday, December 18th, but be sure to take a look at the Baltimore Symphony Orchestra’s website for upcoming shows.

You can also look at the tour dates for Storm Large here and learn more about the Baltimore City College Concert Choir here.