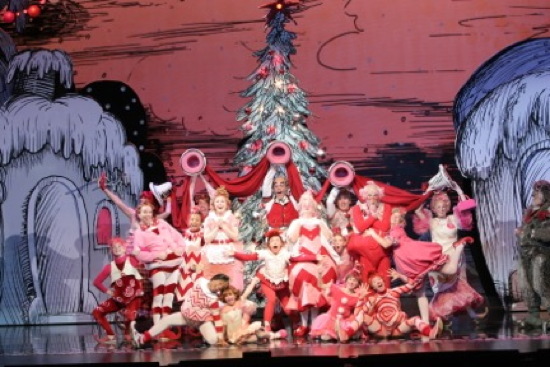 (Photo: The 2014 Touring Company of Dr. Seuss’ How the Grinch Stole Christmas: The Musical, at the National Theatre through December 31.)

Washington’s National Theatre is getting into the Christmas spirit this year by welcoming “Dr. Seuss’ How the Grinch Stole Christmas: The Musical” (playing through December 31 in its Washington premiere). You’re in Seussland before the curtain goes up, with cartoon Whoville residents festooning the curtain along with a festively lit holiday wreath.

We sing along, we clap along, we get snowed on – for an evening, we’re all Whoville residents.

For many of us, The Grinch is holiday comfort food. We know the story. If we grew up on the animated special, we know the song. If a cast member goes up on her lines, any given audience member might be able to chime right in. In fact, the production counts on this tight relationship with the story –audience participation is a big part of the show. We sing along, we clap along, we get snowed on – for an evening, we’re all Whoville residents.

Credit veteran director Jack O’Brien, Set Designer John Lee Beatty, Lighting Designer Pat Collins and Costume Designer Robert Morgan for capturing the sights and colors of Christmas in Whoville. A striking opening image of snowfall establishes a seasonal sense of place, and the re-stagings of some of the classic scenes from Seuss’ book (and, again, the iconic cartoon) are technically clever and often beautiful. The musical welcomes a new character –  Old Max (Bob Lauder) – who narrates the action in flashback as the adult version of the Grinch’s young dog Young Max (Andreas Wyder). Lauder has the pipes of a natural narrator – his gravitas is comforting and effortless. Wyder does the most aerobic work in the ensemble, bounding around the stage on all fours while belting out the occasional tune himself. The Grinch (Philip Bryan), bounds around right along with him, crawling up the proscenium and over numerous Seussian set pieces in his manic effort to hijack Whoville’s Christmas.

The show’s creators face a conundrum: how to wring an 80-minute stage show out of a 30-minute Christmas special and an even shorter storybook. Answer? Songs, and more songs. Trouble is, building within Seuss’ airtight original verse, any attempt at musical songwriting is bound to sound a bit like clunky filler. One song, “It’s the Thought That Counts,” features nearly the whole ensemble but comes dangerously close to venerating the Christmas consumerism it is intended to critique. The music, by Mel Marvin, is relentlessly upbeat and festive. The lyrics and book, by Timothy Mason, struggles to keep pace with Seuss’ natural lyrical magic. The ensemble’s voices, however, are consistently strong, and the actors do an admirable job of embodying the convincing physicality of live action Whoville residents.

Ultimately, the show has a secret weapon against any would-be Scrooges in the audience. Cindy-Lou Who (Julia Rose DiPiazza/Danielle Guilbot) will be remembered from the animated special for mistaking the Grinch for Santa Claus. She gets a much bigger role here, singing, dancing and generally melting hearts. Any would-be Grinches will be converted.

“Dr. Seuss’ How the Grinch Stole Christmas: The Musical” is playing at The National Theatre at 1321 Pennsylvania Avenue, NW in Downtown Washington. For schedules and ticket information, click here.