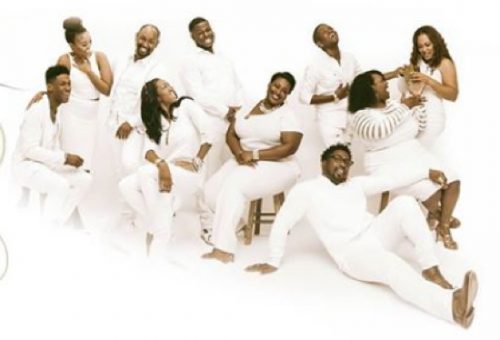 The cast of Sincerely, Holidays!.

I had heard that Arts Centric had been doing a wonderful series of cabaret type shows this past year.  First, there was “Sincerely, Me”, an all-female concert, and then “Sincerely, MeN!”  Now they’re presenting “Sincerely, Holidays!” and, if this one is any indication, I’m mad as all get-out that I missed the first two. Talk about ringing in the holidays!

This holiday-themed vocal extravaganza is jam-packed with talent.  Conceived and directed by Kevin McAllister, this is no ordinary cabaret show.  This is no ordinary anything.  McAllister has crafted an evening’s entertainment by keeping the music and the action moving along as smoothly as a sleigh on fresh-packed snow.  He starts off the evening by setting up a challenge between the boys and the girls to see who can do the best job with some standard carols, given a whole new sound under the stellar music direction and arrangements of Cedric Lyles.  These two are also the founders of Arts Centric.  As for the challenge, nobody loses and the audience wins.

This holiday-themed vocal extravaganza is jam-packed with talent.

The show is structured into two acts, each comprised of three separate sections (though the lines of demarcation get a little blurred here and there.  Two of the sections are hilarious.  The first, listed as ‘Christmas at Grandma’s’, drafted two audience members to join the cast on stage, each given one line to respond with – no matter what the question was.  These two brave souls (Shayne Miller-Westfield and Brittany Adams) looked alternately embarrassed or terrified at first but soon got into the holiday spirit and seemed to enjoy themselves. The second vignette that stands out for laughs involved a nativity scene and concert being performed at a typical church on the holiday.  That one involved a pious church lady and a scantily clad baby Jesus.  The audience was rolling with laughter.  Along the way there’s also a tribute to the Nat King Cole TV series from the ‘50s that included salutes to Eartha Kitt, Louis Armstrong and Sammy Davis, Jr. There are also some quite touching moments filled with beautiful and pure singing. The cast doesn’t ignore the socio-political scene, but they wisely don’t harp on that aspect.  This is a show of celebration in the spirit of the holiday season.

Along with McAllister and Lyles (Lyles also sang and played keyboards on stage), the production included exceptionally well-done costumes by McAllister, a dazzling number of wigs and hairdo’s by Michael Lambert, nicely executed lighting by Lynn Joslin and not one but two Christmas trees and all the trimmings on the set designed by Lee Lewis. And I swear Shalyce Hemby can cover more ground with fantastic choreography on a small stage than most can do with twice the space.

The uber-talented cast of ten (including Lyles), is backed up by a rocking pit band led by Lyles, with Michael Kellam on bass, Kevin Ellis on percussion, and Jordan Chase has got to be one of the best guitarist on the local – or any – scene.

I won’t try to single out every bright moment on the stage because there are just too many of them.  Kelli Blackwell, Denae’Fielder, Raquel Jennings, Shayla Lowe and Pam Ward all strut, shimmy and shout like total pros.  I’d love to tell you that one stood out from the rest but that’s just not possible.  They are each and every one as fabulous as can be with voices that should be the envy of any aspiring singer.  Same goes for the boys.  Kymon George Carriker, Bryan Jeffrey Daniels, David Hammett, Marquis James and Cedric Lyles sing as well as they dance and look so slick it’s like watching the Temptations, the Jackson Five and James Brown brought back to the stage time after time.

Songs I particularly enjoyed include “The Christmas Song”, “Oh Holy Night”, “Little Drummer Boy”, and oddly enough, “Get Outta My Dreams and Into My Car”.  The rousing version of “Joy to the World” that closes the show had everyone up on their feet, singing and clapping and celebrating the season to a fare-thee-well.

What a grand way to start off the holiday theatrical season.  When you’ve had enough of Scrooge, Sugar Plum Fairies and the rest of the familiar seasonal icons, go see something new and fresh and flat-out terrific.  ‘Sincerely, Holidays’ will put you in a holiday mood before you can say ‘Merry Christmas!’