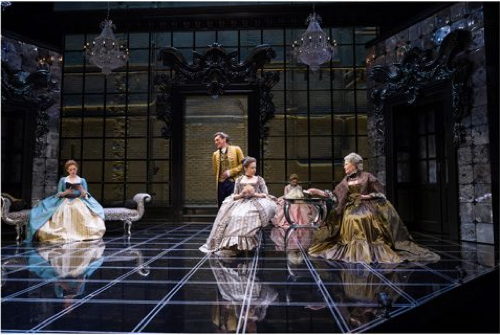 The cast of ‘Dangerous Liaisons.’ Photo by Richard Anderson.

Still under a significant renovation, Center Stage opens its 2016/17 season with a masterful piece of theater written by Christopher Hampton, based on the 1782 novel, Les Liaisons Dangereuses (Dangerous Liaisons) by Cholderlos de Laclos, which also sparked three critically acclaimed films. This production proves that a little sawdust and temporary sheetrock have not put a dent in the creativity and craft of this superlative company. The themes in this play are surprisingly relevant today. As Artistic Director Kwame Kwei-Armah writes in his notes: “Issues of class, consent, power, privilege and ethics are as vital now as they were 200 years ago.”

The French Revolution is looming. The aristocracy (the original One percent) is for the most part, useless and morally bankrupt and none more so than the beautiful widow Marquise de Merteuil (the stunning Suzzanne Douglas) and the ultimate libertine, Vicomte de Valmont (the brilliant Brent Harris). His reputation is renowned.

Bored, these two ex-lovers amuse themselves in the pursuit of passion and revenge. Seduction, betrayal and manipulation are part of a brutal chess game as the two constantly up the ante and destroy innocents (and ultimately themselves) in their wake.

As nothing is sacred, even family, Merteuil’s latest challenge for Valmont is to seduce the daughter of her cousin, Madame de Volanges (Carine Montbertrand). Cécile Volanges (the lovely Noelle Franco) is a virgin who has just left the convent and is now betrothed to an older, very rich man who happens to be a former lover of Merteuil.

Valmont is more focused on his own, and perhaps greatest, pursuit – the genuinely honorable, good and married La Présidente de Tourvel (the enchanting Gillian Williams). Merteuil mixes up the pot even more with yet another challenge. If Valmont can provide a letter from Tourvel that proves he has slept with her, his reward is a night with Merteuil.

Cécile falls in love with a poorer suitor – her music teacher, the young Le Chevalier Danceny (Paul Deo Jr.) who Valmont feigns to take under his wing to help in his pursuit of Cécile even as he uses this pretense to seduce Cécile himself. Ironically, Cécile takes to Valmont’s nightly sexual “lessons” like a fish to water and the comic aspects of this soften what was initially a seduction without consent.

There are only a few sexual interactions and may prove uncomfortable for some but the director has chosen to bring out the humor, such as Valmont writing a letter to Tourvel on the backside of his mistress Émilie (Georgia Warner). What is so mesmerizing are the witty, sexy dialogue and the shameless maneuvering of the two former lovers. Douglass and Harris are perfectly matched and their chemistry is potent.

Valmont ultimately breaks and wins the heart of Tourvel. This love is torture and she finds her only comfort in the arms of Valmont’s understanding aunt, Madame de Rosemonde (the elegant Elizabeth Shepherd.) But Valmont’s conquest backfires – he may have found the one person who has touched him and this possibility has also cut deep the heart of Merteuil. She declares all out war.

Valmont and Merteuil are very complex, intelligent characters and even they show sparks of humanity. As a woman, you cannot help but relate to Merteuil’s survival instincts as a woman in a man’s world with limited options. Despite much advancement over the past two centuries, women are still fighting these same battles today. All Merteuil has is the power of sex but even then a man can still take as he pleases and is lauded.

Center Stage’s Associate Artistic Director Hana S. Sharif, who directed this production, brought out the very best in this supremely talented and beautiful cast – a perfect mix of seasoned professionals and bright, new talent. While the actors captivate the audience the moment they step on the stage, the artistic team has outdone themselves. Scenic Designer Michael Carnahan’s created a captivating set using tones of black, gray and silver. He utilizes large columns, ornate doorways, chandeliers and silky curtains that are manipulated to create different settings. The floor is a constructed to look like a mirror and one cannot mistake the chessboard theme in its lines that form squares and then merge with the multiple square windows at the back of the stage. Huge splashes of color are delivered by Lighting Designer Matthew Richards. He uses bright, psychedelic colors during scene transitions that complement the colors and exquisitely detailed costumes by Fabio Toblini. The scene changes are also marked by classical-flavored music with a modern twist from sound designers Nathan A. Roberts and Charles Coes.

“Les Liaisons Dangereuses” is a very adult and timely play with some uncomfortable themes but designed to be thought-provoking as well as entertaining. Center Stage has done an astonishing and delicate job in mounting this extraordinary production.

Running Time: Two hours and 40 minutes with a 15-minute intermission.