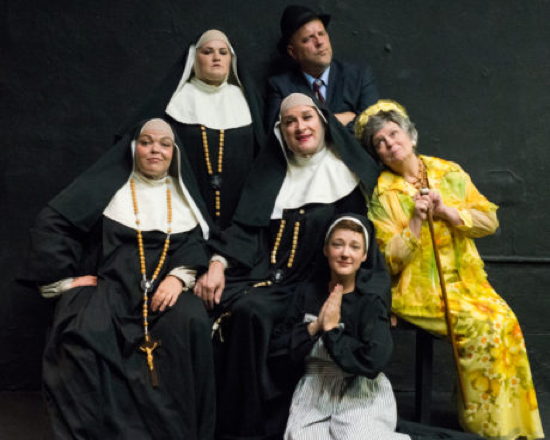 ‘The Divine Sister’ should really be called ‘The Secret Lives of Nuns.’ The production, currently playing at Fells Point Corner Theatre, does not feature your typical run-of-the-convent, holy, devout nuns. Instead, we get a group of irreverent nuns who are all keeping big secrets they don’t know how to reveal. I guess even for nuns, confession isn’t always an option.

The play starts out with Agnes (Anne Shoemaker), a young, cheerful postulant, singing the praises of Jesus. She has visions, hears saintly voices, and believes she’s ‘the immaculate conception.’ Sister Acacius (Holly Gibbs) and Mother Superior (Steven Shriner) doubt her visions and her healing powers – especially when one of her visions involves seeing St. Clare in a boy’s underpants.

…entertaining with an amazing cast of actors.

The nuns’ convent, St. Victoria, needs a lot of work so Sister Acacius and Mother Superior pay a visit to the wealthy Widow Levinson (Lynda McClary). Sure, she might be Jewish, but it can’t hurt to try. Unfortunately, the widow is a firm atheist (believing “God is a fairy tale created by men”) and wants nothing to do with the nuns. Her houseguest, Jeremy (Tom Lodge), is in town to buy the screen rights for a film about a young postulant who has visions. Sound familiar?

At this point, the secrets start unraveling. Mother Superior seems like the stereotypical head of the convent, full of wisdom and grace, but she has a past. Jeremy knew her when she was Susan, a reporter he worked with – and an old flame. Sister Acacius was her friend, Lily, a press agent for fighters. What starts out as something out of ‘Sound of Music’ (complete with a lip-synched version of a Julie Andrews-type song) evolves into dark nun cinema and theater (including pointed references to ‘Doubt’). In fact, ‘The Divine Sister’ gives homage to nun movies throughout the show, using those references to put together a crazy mishmash of a story. There’s even a reference to ‘The DaVinci Code’ as the German nun, Sister Walburga (Kathryne Daniels), has a secret mission in the underground chamber of St. Victoria’s.

McClary as Mrs. Levinson has a flair for the dramatic, going way over the top when describing the life cycle of the cuttlefish she witnessed with her late husband or her later revelations with the nuns. She’s also completely full of herself, constantly referencing her wealth and designer clothes.  Gibbs was born to play Sister Acacius with her strong New York accent and sporty demeanor. We can feel her pain as she questions why she’s always so cruel to Agnes and admits she has a secret she has to take to her grave. Shriner is a ‘superior’ nun in drag, completely at ease with his role as the sister in charge at St. Victoria. And Shoemaker is the epitome of cheer and goodness – well, until the second act of the show. Even with so many over-the-top personalities, each actor is able to shine.

I have to say, I was shocked at the amount of foul language in the production.  Like everything else in this play, it was completely over-the-top. Maybe it’s funny that nuns can be so totally and completely irreverent?

All in all, ‘The Divine Sister’ is about as unholy as you can get. But it’s also entertaining with an amazing cast of actors.  And if you’re a big fan of nun movies and gender-bending humor, you’ll be a believer.

“The Divine Sister” plays through December 18, 2016, at Fells Point Corner Theatre, 251 South Ann Street, in Baltimore, MD. For tickets, purchase them at the door, or online.