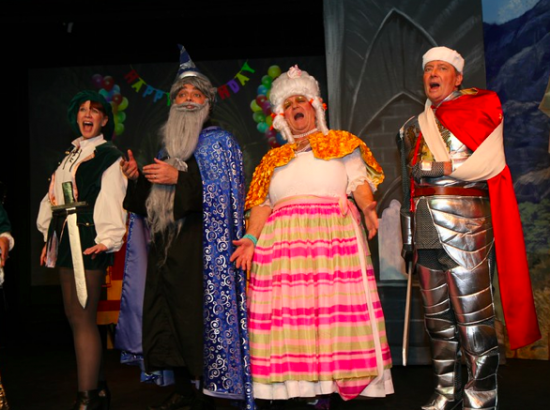 Cast of ‘Merlin.’ Photo courtesy of The British Players.

It’s beginning to look a lot like Christmas as The British Players kick off the holiday season with the Pantomime “Merlin.”

In true British eccentric and slightly naughty style, pantomime is to Britain as important as tea and crumpets. It’s a British institution. No one else has it or probably wants this slip stick form of entertainment, but it will leave you smiling.

It’s a real humdinger of a show a comedic riot….

It is traditional in Pantomime for men to play the role of women and vice versa. The childhood memories came flooding back to me from my years playing the thigh-slapping principal boy in theaters across Wales. The principal boy who is usually the prince or hero in the story is played by a girl; it’s pantomime!

It’s a real humdinger of a show a comedic riot, full of double entendres and the corniest lines I had heard in many years, my face was aching when I left the show that played at the Kensington Town Hall on Friday, December 2nd.

This show is a must-see. The set is simple and easy to manage for a small group of players with huge ambition. The storyline of most pantomimes follows children’s stories such as Cinderella or Peter Pan. The lighting changes and smoke effects were perfectly timed – not an easy task.

In this version of the show Merlin the magician is not based in Camelot but Avalon, and he doesn’t hide his magical powers, which at times are questionable.

During the christening of a new princess born to the King and Queen, there is an evil spell placed on the baby, Princess Avaline by Raven Claw.  I will leave the remainder of the story to chance and well some exceptionally funny characters.

Malcolm Edwards both directs and plays the role known as the ‘Dame’ Henrietta Cupcake. Edwards is hilarious; I am not sure what he looks like as a man, but he makes one terrifying, witty and extremely lovable woman. Edwards has been with the players since 1969. He keeps the show moving, guiding the audience who are key players in a Pantomime, urging them to boo Raven claw, the baddie and keep an eye out for any dragons. OK, slight spoiler alert there may be some dragons, be careful apparently red ones only speak Welsh.

I stopped making a note of his witty comebacks and great one-liners. “Pin back your lug holes,” (ears to my American friends) this show will make you laugh.

The chorus created a big sound for such few people including 5 children the youngest being 7 years old. The songs were well-chosen and adapted for the British Player’s version of Merlon and Sue Edwards created simple yet effective choreography.

Meghan Williams Elkins play Queen Guinevere, she has great stage presence and plays the gracious Queen Guinevere with eloquence. The audience didn’t get to hear Elkins sing until the second act, and I would have loved to hear her beautiful operatic tones more throughout the show.

She partners with the young, bold King Arthur played by Joe Lilek. A booming voice, great stage presence and the straight man for the most part. His duet with Elkins brought the house down; Lilek has a well-controlled voice and again it would have been great to feature his vocal abilities more.

Missi Tessier takes control as the baddie Raven Claw, a great wicked laugh as she took the role and ran with it. She leads a very rousing version of “Uptown Funk” with the ensemble. Despite being the villain who traditionally in panto gains no fans, take my advice learn to spell Raven Claw before you head out to see the show, she is magnetic and despite being the baddie – you will want to sing along.

Allan Brown took on the role as the madcap Merlin conjuring up spells and keeping the show moving with great pace, great timing and some very jocular moments.

Teri Klein Allred plays Harry, the commoner who wants to win the heart of Princess Avaline played by Danielle Schuh. Will he or won’t he is the question? Klein Allred is a joy to watch throughout and Schuch despite admitting she is no singer does a fine job singing her way through the show.

Neddy Night and Davy Day, and yes these are real characters played respectfully by Charles Hoag and Robert Leembruggen. This dynamic duo is hilariously funny they bring a whole new meaning to corny comedy.

Sir Cumference, the worn out knight who is afraid of knights balances out the cast with his straight-laced character for the most part with occasional funny lines played by John O’Leary.

“Merlin” runs through December 11, 2016 at Kensington Town Hall. For ticket information, you can check out the website here.