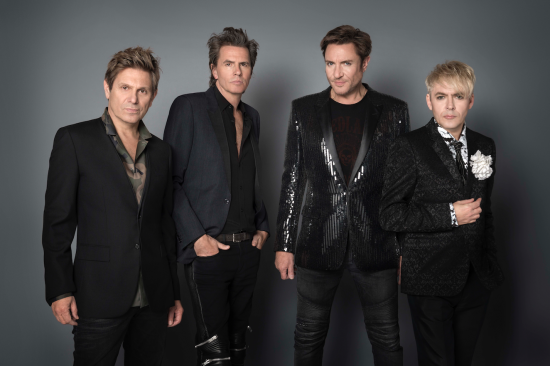 A band who are still hungry like the wolves (excuse the pun) and who pride themselves on never standing still took to the stage and rocked a packed house.

After a sold out performance on New Year’s Eve, Iconic British band Duran Duran played a second night at The Theater at the MGM National Harbor on January 1, 2017. I was lucky enough to be there!

Soon, I believe, The Theater at the MGM National Harbor will rank as one of the top concert venues on the East coast.

The last time I watched this band I stood in a mud-filled field in the pouring rain in the middle of England. Being a Brit, I was a frequent flyer at music events in the UK and the weather never cooperated, but that was well over 20 Years ago.

For my first visit to The Theater at the MGM National Harbor, I was blown away!

There are so many music venues across the country that were never really designed for concerts. This theatre was designed with concerts in mind and its apparent. Soon, I believe, The Theater at the MGM National Harbor will rank as one of the top concert venues on the East coast. So remember you read it here first!  The modern style theater holds around 3,000 people but still manages to feel intimate, there isn’t a bad seat in the house helped out by two huge screens on either side of the stage.

If Mariah Carey wanted great sound on New Year’s Eve the MGM is where it was at!

The lights came up and the crowd lit up screaming for the British boys who don’t look like they have aged since I saw them 20 years ago. I need to find out their secret!

I could sum this show up in one word, amazing! Sadly, I maybe out of a job if I did that.

The large stage showed off a great lighting show. There is also a large screen behind the stage which on this occasion played videos, photos, and images backing up the song performed on stage. At one point in the show, there was a tribute to David Bowie as his picture flashed up on the big screen as Le bon segued from “Planet Earth” to “Space Odyssey,” a song written by Bowie who died in in January 2016.

They kicked off the show with “Paper Gods” the title song from their latest and 14th studio album; then it was back to the oldies. From “Wild Boys,” “Hungry Like a Wolf” to “The Reflex” the hits just kept on coming. Just a little over one hour and 30 minutes of pure excitement with the whole band giving an amazing performance showing that great songs are timeless. The energy and enthusiasm were intoxicating.

Le bon’s voice is amazing. It’s so refreshing to listen to a band who are still playing the songs that propelled them into the limelight and singing them exceptionally well. Le Bon didn’t miss a beat or a note with his prodigious vocal performance.

Also joining the guys on stage were Anna Ross and Erin Stevenson. Both singers flip flipped from backup vocals to being featured in songs. I thought they added a nice contrast to the show. The girl’s vocals were heavy with effects, but it worked for the style of the music.

Duran Duran has rocked the charts for over three decades selling over 100 million records and producing 18 American hit singles and 30 UK Top 20 songs.

I love people watching at concerts. I am always intrigued to see what songs get people out of their seats. At this show, the crowd was on its feet the moment the boys hit the stage.

I stopped counting after 15 great songs on the set list but the encores comes in the form of  “Save a Prayer” and “Rio.”

Duran Duran formed in the mid 70’s were considered an alternative group, but they soon rose to pop sensations in the mid-80’s. There has been a few lineup changes and additions to the band over the years, but they have been performing together since their formation.

The MGM took two years to build and cost around $1.4 billion and it shows. The 24-story destination includes 15 dining options, 308 hotel rooms, the theater, a 125,000-square-foot casino and 18,000 square feet of retail. I didn’t cover it all last night, but I did my share of exploring and can’t wait to return.

If you are heading out to see a show at the MGM, my advice is give yourself a little extra time. The staff are friendly and welcoming at every turn. This new and wonderful venue is drawing the crowds from far and wide. Parking is free, however there is a charge for valet parking, which I highly recommend. Don’t worry about rushing to finish your drinks as you head into The Theater as drinks are permitted.

You can find out about the upcoming shows at the MGM here and check out where Duran Duran are heading next on the band’s website.