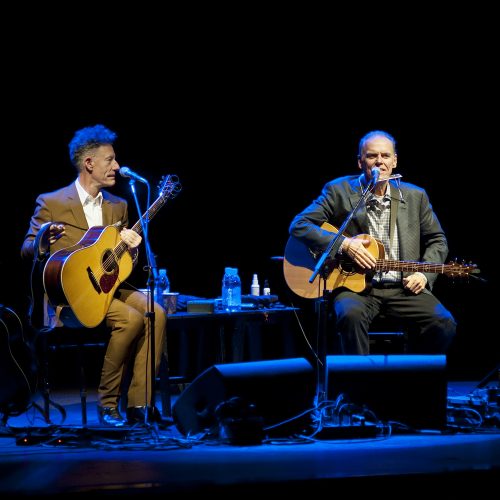 John Hiatt and Lyle Lovett Croon and Banter at Strathmore.

“We’re aimless, but with good intentions.”

John Hiatt and Lyle Lovett began their evening of acoustic music and banter at The Music Center at Strathmore in Bethesda, Maryland on Thursday night wondering aloud if that descriptor of the evening’s agenda would make a good T-shirt slogan. They agreed it probably would. It proved an apt tagline for the show.

Each has a strong twang in his strong voice.

Hiatt and Lovett are long-term road dogs of the singer-songwriter scene. Both are, by choice, hard to pin down in a specific musical category. Each has a strong twang in his strong voice. Both are rooted in the blues. As Lovett quipped, “Townes Van Zandt said there were two kinds of music: the blues, and Zippidee-Do-Dah.” Quipping and banter, in fact, anchored the show, with Hiatt and Lovett – old friends as well as touring partners – sharing lightly scripted anecdotes between songs like two small town elders on a porch. Lovett, in particular, has the droll timing of a seasoned comedian and speaks in a gentle patter that lends his formidable singing voice a sense of constant surprise. They set up a tempo for the show of music that was occasionally upbeat but often reflective, offset by intervening laughs. It made for an intimacy and levity sometimes lacking in acoustic shows, which can tend to get weighty.

Hiatt kicked off the evening with “Drive South”; Lovett followed with “North Dakota”, and the audience fell into one of the pleasures of the evening: watching one watch the other perform with a look of wonder similar to those in the audience. Hiatt occasionally lent a guitar solo to Lovett’s songs. The duo worked together powerfully on one of Hiatt’s hits, “Thing Called Love,” popularized by Bonnie Raitt in the late 1980s, and also on Lovett’s “White Boy Lost in the Blues.” The show progressed towards better-known songs; Hiatt’s “Perfectly Good Guitar” led into Lovett’s “If I Had a Boat,” each a slower, more plaintive performance than their recorded versions. Both performers have deep wells of work to draw from; Lovett has made 14 albums, and Hiatt just released his 22nd. Both, however, seemed to revel in the opportunity to do a new take on old material. Hiatt threw in an unrecorded song – “Hide Your Tears”; apparently it didn’t make the cut for his new album, but Lovett gently prodded his friend to “get going” on recording it.

The evening built to an (acoustic) crescendo of Hiatt’s rocker “Memphis in the Meantime” and an encore duet of Lovett’s “My Baby Don’t Tolerate.” During the encore, Lovett voiced what many in the warm, wood-paneled Strathmore hall must have been thinking by thanking the staff and the sound crew for their dedication. The acoustic mix was remarkably clear and balanced – often a tough feat in orchestral music halls. Hiatt and Lovett’s voices alternately warbled and crunched as the songs required, and the audience did not miss a moment.

As satisfying was the sense both performers provided of the traditions they came from and the musical shoulders they stood on. Names were dropped throughout the night as Hiatt and Lovett tipped their hats to their inspirations and mentors. While music lovers are more likely to know Ry Cooder and John Lee Hooker than some of the Houston songwriters Lovett mentioned, he made clear that all were important in his development as an artist. Was there a bit of self-serving marketing in Lovett and Hiatt talking through each other’s careers? Certainly. Still, there was a genuine appreciation that those who came before them made them possible. Show business could use a bit more of that sentiment. In this moment, America could too.

Tickets and Performance Schedules for The Music Center at Strathmore are found at www.strathmore.org. For more information on Hiatt and Lovett’s tour, click here.