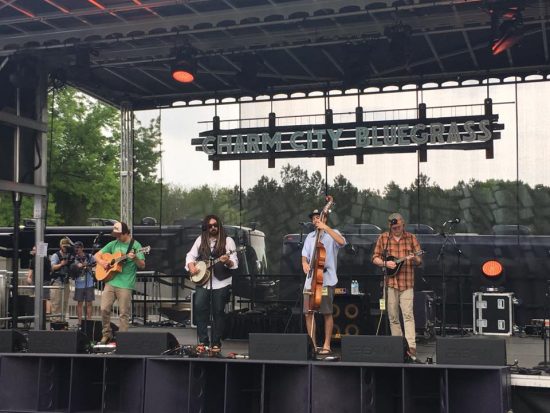 Charm City Bluegrass festival kicked off on Saturday at Druid Hill Park, and the crowds gathered early to attend the festival that is celebrating its 5th year.

Despite the festival’s name, this year there were bands performing who swayed outside the traditional bluegrass influence. The all-day event takes place over three different stage the Union Craft Brewing Stage, the 8×10, and the H.P Rawlings Conservatory Tent.

…unique and much loved genre of music.

Last year’s festival earned the Event of the Year honor from the International Bluegrass Music Association Momentum Awards. I had a chance to catch up with one of the organizers Adam Kirr who says the festival is growing each year.

This year there are 14 bands, local brews, plenty of food choices and workshops culminating in a crowd pleasing event at Druid Hill Park.

“The 8×10 stage pays homage to the club of the same name in Baltimore that brings great musicians to the area year round. The Union craft stage, which is the exclusive beer sponsor for the festival and it has been a great partner over the years, and we are so grateful for that partnership. Our third stage is a tent stage, the H.P Rawlings Conservatory Tent named after the conservatory which overlooks the festival grounds, it’s a beautiful structure and has put Baltimore on the map architecturally,” says Adam Kirr.

“There are 14 bands this year ranging from traditional to contemporary bluegrass to the more progressive bluegrass bands. We are growing, I believe there were ten groups the first year the festival took place. This year people can see some of the more progressive performers many wouldn’t consider bluegrass through and through but it’s important to us to help to grow the genre by featuring a variety of bands who ultimately take their influence from bluegrass music,” adds Kirr.

Kicking off at 10 am on The 8×10 stage was The Dirty Grass Players, the band won the battle of the band earlier this year and it’s clear to see why.
Dustbowl Revival, another great band in a strong festival line-up the 8×10 stage later in the day, headlined by Aijala, Emmitt, Kaufman & Thorn (members of YMSB & Leftover Salmon).

The Union Craft Brewing Stage kicked off with the Kitchen Dwellers with The Lone Bellow consisting of Zach Williams, Brian Elmquist and Kanene Pipkin headlining and the Brooklyn boys didn’t disappoint. The High and Wides started the music at the H.P. Rawlings Conservatory Tent giving revelers a chance to sit out of the hot sun headlined by Valerie Smith and Liberty Pike following, Country Current (U.S. Navy Bluegrass Band), Frankie Short, The Northern Connection, and Danny Paisley and the Southern Grass.

Workshops throughout the day expanded from previous years including Banjo, Mandolin, and vocal harmony workshops.

The original two organizers of the event thought to bring the traditional of bluegrass back to Baltimore stemming back to a migration of people from Appalachia who moved into the area years ago bringing the unique blend of music with them.

Some of the biggest names in bluegrass played in dive bars years ago in Baltimore so they aspired to bring back the genre of music to Charm City, and they did just that.
Kirr adds, “The first year of the festival there were about 1,000 people, this year we are planning for around 4,000 festival goers. The tented stage features traditional and contemporary bluegrass bands; it is much more focused on the bluegrass roots. People will also get the chance the attend workshops with some of the best pickers in the industry all for the price of a ticket purchase.”

Bluegrass education is a big part of the efforts of the organizers of the event. With 45 different vendors and plenty of food choices, the entertainment and fun aren’t just restricted to the bands on stage. The festival oozes good vibes and it’s family friendly, kids 10 and under are free with an adult ticket.

If 12 hours of bluegrass isn’t enough, the after continued at 8×10 featuring Billy Strings and friends.

The festival brings for many an undiscovered genre of music to many who may not have otherwise ventured into this unique and much loved genre of music. Me being one of those people.

Kirr says, “Now we start all over again and start planning for next year. We will probably start that in July a little earlier than we did this year as we expect more great bands and more festival goers. We want to book the bands we want as soon as we can to continue to improve this event.”

Parking is easy to attend the event, with well-stationed volunteers and signage and every aspect from tickets to entry to on-site ATMs and electric vehicle charging stations. This festival is a well-oiled machine and from what I saw everything was well thought out and run very smoothly.

No date has yet to be announced for the 2018 festival, check out the festival website for updates.